The ghosts of NCAA strike Bulldogs yet again 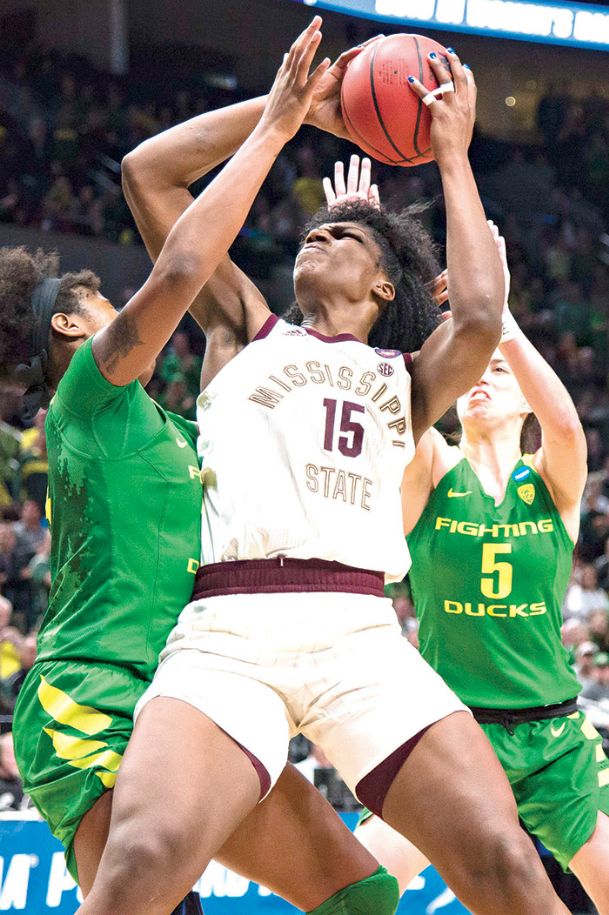 For much of the 2019 season he preached of the phantoms of NCAA Tournaments past that haunted his squad.

In 2017 it was South Carolina's A'ja Wilson who torched the Bulldogs for 23 points and 10 rebounds in a 67-55 win in the NCAA championship game.

This year's specter was Oregon junior guard Sabrina Ionescu, who totaled 31 points, 8 assists and 7 rebounds in the Ducks' 88-84 Elite Eight victory over the Bulldogs on Sunday in Portland, Oregon.

"She's a great player," senior guard Jazzmun Holmes said in a news conference following the game. "We did all we could."

The 2018-19 season was supposed to be a revenge tour of sorts for the Bulldogs.

After back-to-back seasons of gut-wrenching defeats, MSU was prepared for an all-out press toward the school's first national championship in any team sport.

But for the third straight season, the Bulldogs came agonizingly close to reaching the mountaintop before being ousted.

While the pain of defeat seeps into the MSU locker room, context must not be lost.

Before Schaefer was hired in 2012, the program had reached the NCAA Tournament six times in its history. They've now been five straight seasons.

Before Schaefer was hired, the program boasted three All-Americans since its beginnings in 1974. It has matched that number between 2014 and 2019.

And before Schaefer was hired, MSU had never made it to an Elite Eight, let alone a Final Four. They've done so each of the past three seasons.

The Bulldogs have reached unparalleled heights in the seven years since Schaefer took the head coaching job following a nine-year run as an assistant at Texas A&M.

"It's an opportunity my family prayed about and feels really good about," he said when he was hired in March 2012. "We are excited to be part of the Bulldog family."

Upon reflection, Schaefer surely should feel good about his decision.

Gone are the days of hoping and praying for an NCAA Tournament berth. Success is an expectation in Starkville these days -- not an aspiration.

So while the sting of yet another ghost may haunt Schaefer, his team and MSU fans, they must remember that 2019's success was unheard of just a short time ago.

"I'm disappointed in myself that it didn't happen for us," Schaefer said Sunday. "I'll go back, I'll watch the film, and I'll get better. I'll learn. But these kids, they did everything they could do. I mean, I couldn't be prouder of them."