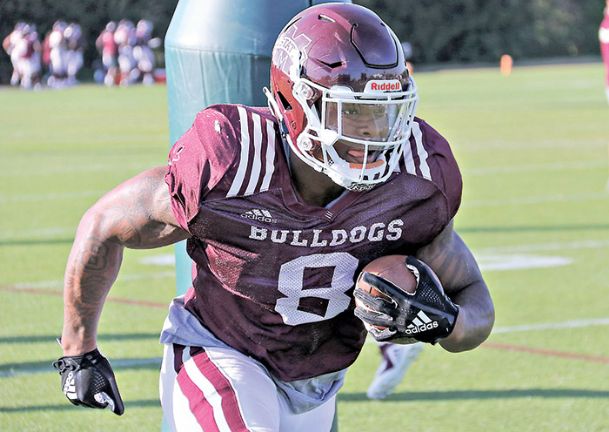 Columbus High School graduate Kylin Hill is ready to be Mississippiâs Stateâs one-two running punch next season in the Southeastern Conference. Photo by: Jim Lytle/Special to The Dispatch

Columbus High School graduate Nick Gibson, a redshirt senior, is ready to be Mississippiâs Stateâs one-two running punch next season in the Southeastern Conference.
Photo by: Jim Lytle/Special to The Dispatch

Mississippi State athletics has had its fair share of dynamic partnerships.

The 1985 MSU baseball team had Rafael Palmeiro and Will Clark -- thunder and lightning, as they're oft referred to.

The 1996 men's basketball team -- which reached the Final Four -- had Darryl Wilson, Erick Dampier and Dontae' Jones leading the charge.

If you ask Gibson, he'd compare the Bulldogs' two-headed rushing attack to the legendary Southern California tandem of LenDale White and Reggie Bush.

Bush and White powered the Trojans offense to a combined output of 3,042 yards and 40 touchdowns in 2006 en route to the national championship game.

Gibson believes he and Hill can bring a similar spark to the MSU backfield.

In the first scrimmage of the spring last Saturday, Hill flashed his home run ability on the opening play. Taking a handoff from junior quarterback Keytaon Thompson, he hurdled a fallen defender in the trenches.

Though the play was blown dead as he hit the open field, Hill then burst through the second level, shooting past lunging linebackers and defensive backs for what would have been a 65-yard score.

When asked whether he thinks Hill can be a 1,000-yard rusher, Richardson was succinct in his response.

"Without a doubt," he said. "Kylin can basically do anything he wants to do if he puts his mind to it."

For Gibson, this is supposed to be his big season. In four years at MSU, the Birmingham, Alabama, native has never attempted more than 45 rushes.

He has waited his turn.

Gibson said Tuesday there were times he thought about transferring. But it was his family that convinced him to remain in Starkville.

"They always tell me, 'Once you commit to something, stick to it, no matter how hard or how tough it is.' So it's motivated me into staying and I really like coach Moorehead. I think he's a great guy and I wouldn't rather be in any other program other than his."

Gibson and Hill have embraced the competition. While Hill should enjoy the lion's share of the carries, Gibson is ready to play the LenDale White to Hill's Reggie Bush.

"Even though I know coming into it that he's got the job it's just love and competing and just making the team better," Gibson said.

DAWG NOTES: Moorhead said that his team was banged up following Saturday's scrimmage.

Senior defensive tackle Kendell Jones was seen pacing the sidelines wearing a sling. Moorhead said last week that he had suffered an upper-body injury and would be out for the foreseeable future.