Thompson looking to the air for MSU 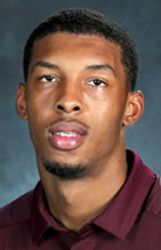 Keytaon Thompson knows it's his time.

Though nothing has been officially endowed, the junior quarterback should be the starter when the season opens on August 31 against Louisiana at the Mercedez-Benz Superdome in New Orleans.

After backing up Nick Fitzgerald, this is his offense to run. How it will look? That's still in the works.

Tuesday's practice gave some insight into how head coach Joe Moorhead plans to use Thompson.

A gifted thrower, Thompson possesses the intangibles to push the ball downfield and take some velocity off his throws on intermediate routes in a way Fitzgerald couldn't.

Thompson showed control and accuracy during Tuesday's session, finding receivers down the seam, toward the sideline and on crosses over the middle.

"From last year, when he used to throw the ball sometimes, you'd be like, 'What the hell is he throwing it at?'" senior running back Nick Gibson said. "And now whenever he throws the ball it's right on target, it's concise, it's where it needs to be and I'd definitely say KT has made the most improvement."

Not the runner Fitzgerald was, Thompson will lead a more regular passing game along with a schematic shift toward a two-back system with Gibson and junior running back Kylin Hill of Columbus in tow.

RECEIVER QUESTIONS: With Thompson likely locked in at quarterback and Hill and Gibson prepped to anchor the running game, the lone skill position question marks are at receiver.

Senior Stephen Guidry is a talented player, but he's been unable to stay healthy thus far. The No. 1 junior college receiver in the nation out of Hinds Community College, he led the team with 440 yards last season.

Redshirt senior slot-man Deddrick Thomas could be an intriguing piece. A speedster who's dangerous on intermediate routes, Thomas should provide a safety net on crossing patterns.

Redshirt junior Osirus Mitchell is the second-leading receiver returning. He totaled 427 yards on 26 receptions in 2018.

Behind that trio are plenty of unproven pieces.

Redshirt senior Malik Dear has shown flashes in practice, but he caught just one pass a season ago.

Redshirt freshman Cameron Gardner, a Starkville native, has the size, 6-foot-4, to be dangerous in the red zone.

Freshmen JaVonta Payton, Quinton Torbor and Kyziah Pruitt will arrive in the fall.

Payton is the likeliest of that group to play a role this season, but he'll need to be caught up to speed quickly upon arrival in Starkville.

MSU works out again on Thursday.