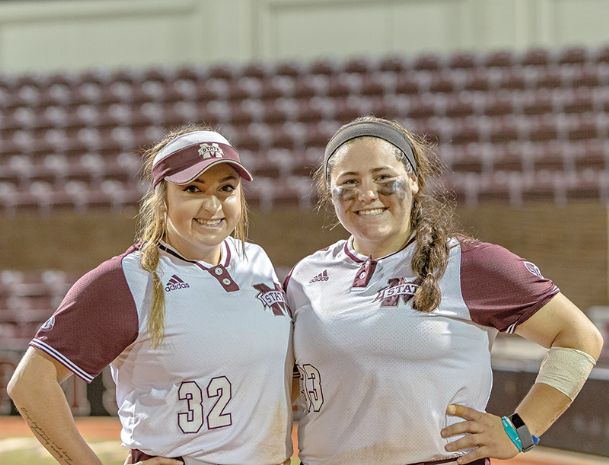 Sisters Montana Davidson, left, and Mia grew up in a military family and became Mississippi State Bulldogs on the same day in 2013. Photo by: Chris McDill/Special to The Dispatch

First is a high-five at chest level. Another with the opposite hands follows.

The last stage of their pregame hand dance entails folding four fingers downward toward their palm.

With their thumbs pointing outward, each girl's pinkies touch to create a silhouetted bull -- an ode to their hometown of Hillsborough, North Carolina, which sits roughly 15 miles from Durham and its Triple-A baseball team, the Durham Bulls.

"We just take it back to home," Mia said. "You've got to remember where you come from."

Nearly 700 miles from Hillsborough, Mia and Montana have helped anchor the Mississippi State softball team to what should be its third straight NCAA Tournament appearance.

And while the distance from home is vast, the family, both literal and figurative, they've found in Starkville has provided comfort.

"We came from a small town and this small-town feel felt like home," Mia said of Starkville. "It was a family demeanor and I think that's what stood out more than anywhere else."

Christina Davidson was ready to jump.

Strapped up in her flight gear high above ground, Davidson was prepared to leap from a military plane as a part of her duties in airborne school at Fort Bragg, North Carolina.

But as the door opened, she was unexpectedly whisked away.

Davidson was sent crashing into the plane's wing before plummeting toward the surface.

"All she remembers is hitting it and then passing out," Mia said. "And the parachute luckily deployed and saved her life."

Today, Christina still suffers from hip and shoulder problems from the accident. But that never stopped her from playing with her girls.

"It's pretty amazing because we still rough play sometimes and she's like, 'Y'all got to be careful, I'm getting there,'" Mia joked of her mother.

Mia and Montana learned to live within the order and discipline that comes with military life as kids.

In addition to their mother, the girls' father, Eddie, served in the U.S. Amy. The couple met at Fort Lee in Virginia and began dating during their time at Fort Benning in Georgia following airborne school.

While home life was regimented, the same discipline could be seen in the sisters' play on the softball field.

First came Montana, a smooth-swinging infielder whose defense speaks as loudly as her bat.

Next was Mia, the No. 4 recruit in the country per FloSoftball 2017 class rankings. A catcher by trade, the younger Davidson does her talking with staunch power at the plate -- an ability that helped her set a program record for home runs by a sophomore last week with 16.

Beth Mullins, than an MSU assistant coach, was the first to notice their potential at a tournament in Trussville, Alabama.

Mullins had hounded MSU head coach Vann Stuedeman to give Mia and Montana a look despite them being in seventh and eighth grades, respectively, at the time.

As January shifted into the summer, Stuedeman offered scholarships to both girls.

"They stayed loyal and huge Mississippi State fans," Stuedeman said. "I just can't say enough about that -- what that means to me and our program, that they would commit so early and then stick it out and come here and follow through."

Friday night, the Bulldogs defeated No. 7/5 LSU 6-0 for the team's third consecutive victory -- including a Sunday night win over No. 4/4 Alabama in Tuscaloosa.

After the game the Davidson sisters flashed their differing personalities.

Montana, who Stuedeman has called an added coach on the bench, spoke on the larger picture at hand.

"I think ever since our win with 'Bama, the fight's still there and it showed up tonight," Montana said. "Our bats were rocking, our defense was crazy."

Mia was bubbly, almost happy-go-lucky postgame. She flashed an ear-to-ear smile that rivaled Eddie Haskell as she praised the exploits of her teammates while brushing aside her own success.

"People probably didn't expect us to win tonight and we came out and crushed," she said. "Emily Wiliams pitched crazy in the circles, freaking Fa (Leilua) hit two tanks."

As their careers in the maroon and white wear on, a torn ACL last season granted Montana a medical redshirt.

Now a sophomore by eligibility standards, she and Mia will finish their time in Starkville how they arrived -- together.

"Yeah, we will argue; yeah, we will fuss with each other," Montana said. "But would I imagine playing on any other team with anyone else? No. It's like a dream come true."