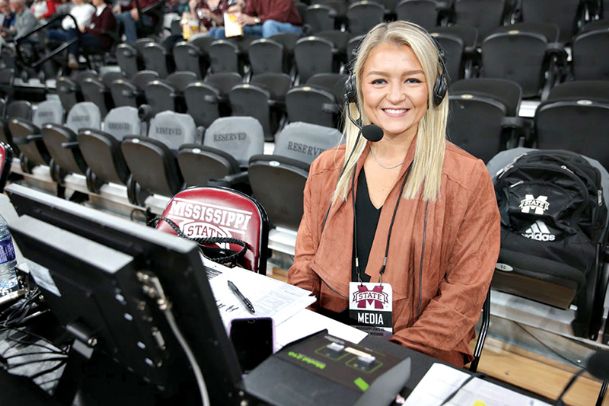 Blair Schaefer sits on the sideline of a Mississippi State women's basketball game as a media member. After graduation, Schaefer worked as a color commentator and analyst for SEC Network and ESPN before deciding to return to MSU women's basketball as a staff member. Photo by: Photo courtesy of MSU Athletics

STARKVILLE -- For Blair Schaefer, something was missing.

After finishing her standout four years as a guard playing for the Mississippi State women's basketball team, Schaefer had decided to pursue a career in television.

That path first took her to WCBI, the Columbus-based CBS affiliate, where she covered local news and sports. She also worked as a color commentator and analyst for SEC Network covering women's college basketball and even helped with ESPN's coverage of the NCAA women's basketball tournament.

As she stood along the sidelines breaking down games for the viewing audience, that's when it really hit her. She wanted something more.

"It just felt like no matter how big the stage, my heart was always with athletes," Schaefer said. "And I kept thinking throughout the games as I was calling them, 'I wish I could talk to the athletes instead of telling the public what I'm seeing.' I felt like my purpose was deeper than what I was doing."

That drive ultimately brought her back to Starkville - to a Mississippi State program where the Schaefer name carries weight for a number of reasons.

Blair played on both of those teams, earning accolades and creating moments in her own right that will live in Bulldog lore. She was a sure-handed three-point shooter from the corner and had a knack for taking charges on defense.

Now, Blair walks the halls at Humphrey Coliseum in a new role with the team - coordinator for player development.

"Being through the program here at Mississippi State I know exactly how (we) want things," she said. "So just to be back in this environment is a great feeling."

The road back to MSU

The process started with a phone call in either January or February.

Chatting with her father, Blair expressed her thoughts regarding the television business and that she may want to jump into the coaching ranks.

Learning curve aside, the transition made sense. A do-it-all guard in her playing days, Vic said his daughter's desire for perfection is a trait that translates well to coaching.

With basketball season still in swing, the two temporarily tabled the idea. Soon after the Bulldogs' run in the NCAA tournament ended with a regional final loss to Oregon, Blair met with MSU Athletic Director John Cohen to sort out a position that would fit. They settled on coordinator for player development. She began work in mid-May.

Blair's day-to-day tasks vary -- whether it is speaking with residence assistants about housing for the players or helping to organize recruiting portfolios or community service opportunities.

"Although it's not a coaching position, it's a beginners' coaching position," Blair said. "And I'm able to still observe and see how it's done the right way and start to think from the other side of the court."

Learning from the best

While Blair is still fresh on the job, there are plenty of mentors within the MSU coaching ranks for her to emulate.

At the top of the chain is her father. Vic has completely overhauled the trajectory of the women's program in his six years at the helm. His first team in Starkville posted a losing record, but the program has quickly turned into one that packs Humphrey Coliseum and perennially competes among the nation's elite.

"I just think it's a great opportunity," Blair said of working with her dad. "Some people say 'Oh I could never play for my dad or work for my dad.' It takes a special relationship -- and we have that -- so why not learn from the best? It's not like he's an average coach. If I can learn from the best then I want to stay here and do that. The fact that he's my dad, that's just a bonus."

There are also assistant coaches Dominique Dillingham and Ketara Chapel, both former teammates of Blair's. Both were seniors on the 2017 squad that ended Connecticut's 111-game winning streak with a Final Four victory that propelled the Bulldog program to its first national title appearance.

Dillingham is now the video coordinator for the team. Chapel is a graduate assistant for her former coach.

"You want to expose these young coaches to the total program," Vic said. "Everybody thinks it's just coaching, it's just practice. They don't realize what all goes on in an office on a daily basis, the recruiting piece, the social piece, the development of these young ladies on and off the floor.

"I think that's what we do with our young coaches is we try to expose them to the total program and let them learn and see firsthand what takes place every day so that they realize it's more than just going out to practice it's more than showing up for a game," he continued. "There's a lot that goes into running a top-10 program day-in and day-out. And now they're a part of that and they have a role in that."

Currently Blair is in Italy accompanying MSU as they represent the United States in the 2019 Summer World University Games.

The daily grind and ever-changing nature of her position persists, but there's a sense of correctness in her new role. The comfort that she lacked in television has now been rediscovered in basketball.

"I just feel like it's surreal," Schaefer said of being back at MSU. "It's where I'm supposed to be."