The father, the son and the Big Ten Commissioner: To MSU's Warren, future commish is just 'Dad' 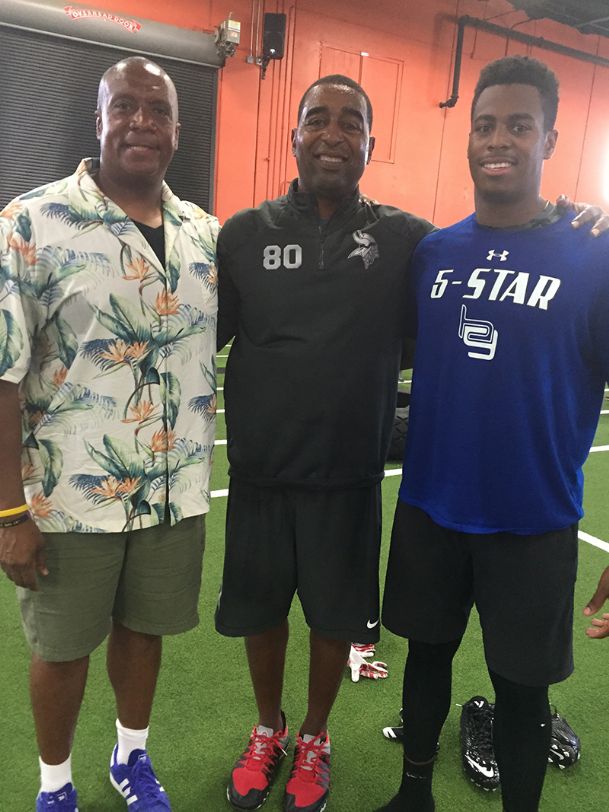 From left to right, future Big Ten commissioner Kevin Warren poses with Cris Carter and his son, Powers Warren in July of 2016 in Ft. Lauderdale, Fla. Photo by: Courtesy photo

The steady vibrations were nothing new. His current post as the Chief Operating Officer of the Minnesota Vikings merits ample phone calls, emails and texts.

After a process that included five finalists, interviews and deliberation, Warren was publicly named the sixth commissioner of the Big Ten Conference. He will begin the transition in September and take office in January 2020.

"I just want to make sure that I make everyone, from presidents to athletic directors, coaches, administrators, alumni and student-athletes proud for me to serve as their commissioner," he told The Dispatch.

"I didn't really know how big a deal it was until everybody came up and started saying congratulations," he said.

Attention aside, Powers felt an undying sense of pride at the numerous congratulatory messages he received both in person and over the internet. Besides, his dad had earned it.

"Of course I'm proud of him and I know he's proud of himself," Powers said. "It's a big jump and hopefully it leads to greater and bigger and better things, but he deserves it. That's one of the hardest working men I've ever met."

From Florida with love

Powers Warren's dream started with a set of shoulder pads.

From the time he began Pop Warner football, his desire to play collegiately remained steadfast.

Born into an athletic family, the goal was anything but far-fetched.

An athletic standout in his own right, Kevin spent his freshman season as a member of the University of Pennsylvania's Ivy League title-winning basketball team in 1982. He later transferred to Grand Canyon University in Phoenix where he earned GTE/CoSIDA All-American honors and scored 1,118 career points. He was elected to the GCU Athletics Hall of Fame in 2012.

The 6-foot-3, 245-pound tight end earned interest from a handful of small college programs but sought a shot at big-time college football.

The Warrens weighed their options.

"What do you really want to do?" Kevin posited to his son.

"I want to earn a scholarship to a major football school in a major conference," Powers replied.

Vincent suggested the Warrens explore IMG Academy in Bradenton, Florida -- an athletic powerhouse that has sent 140 football players to the Division I level, including Vincent's son, Taron.

Sold on the school, Kevin and Powers trudged through the wee hours of the night compiling the necessary paperwork needed to complete the transfer.

In a matter of 12 days, the two hopped on a plane to Florida. Powers was off to the sunshine state.

With the prospects of a college career alive and well, both father and son experienced palpable excitement. Yet for Kevin, the time had come for his lone son to leave the nest -- a feeling that manifested itself on the return to the Midwest.

"I remember taking him there, dropping him off and, as a father, just sobbing the whole flight home," he said. "I was hoping and praying that he would be ok."

Kevin Warren took a quick dip in the hottub.

An NFL agent based outside Kansas City at the time, Warren traveled to Hawaii for the 1996 Pro Bowl. Finding a momentary pause in the festivities, he took some time to relax in the paradise-esque conditions.

He was not alone.

The two quickly got to chatting. They clicked.

"He's one of my best friends and one of the best people I've met in the sports world in my almost 35 years in (it)," Carter told The Dispatch.

Since their beginnings, the friendship has endured in their respective families.

Carter's daughter, Monterae, works for the Vikings and has stayed with the Warrens, while Carter guided Powers through training and the recruiting process.

Seeking to boost his stock at IMG, Powers prepared for a practice session with Carter. A longtime coach at Florida stalwart St. Thomas Aquinas, the former All-Pro receiver took the first workout as a diagnostic test of sorts.

Sold on his prospects, Carter began working with Powers to further his profile.

"I really thought he was being under-recruited," Carter said. "For what reasons, I don't know. I just tried to help him out."

Interest soon picked up. Once at IMG, Power Five programs came calling. One stood out.

On May 23, 2017, the day Powers yearned for long ago finally arrived. With an offer in hand, he committed to MSU.

Gleaming with pride, Kevin, who was at an NFL league meeting in Chicago at the time, spread the news.

He quickly informed Vincent, who was also in attendance.

A phone call to Carter followed.

Stepping onto a balcony, Kevin was overcome with emotion as he revealed the news with his old friend.

Years after Powers donned his first set of shoulder pads, he had reached the zenith of college football. Destiny fulfilled.

A phone call away

Whether it be a text or call from his father, the two remain in constant contact despite living more than 800 miles apart.

For Powers, the immediate future offers a glimmer of hope. MSU coach Joe Moorhead has said the offense will boast a renewed focus on the tight ends in the passing game this season.

Having appeared in five games last year, Powers stands to make an impact on the 2019 Bulldogs.

"I think I've improved a lot," he said. "Just playing fast, getting used to the speed at the SEC level is for sure a jump coming from high school, but I think I'm used to it now."

In Kevin's case, he will continue the family trailblazing business in January when he takes office as the first black commissioner of a Power Five conference.

The appointment will take place roughly 38 years after his own father was named the President of the 1982 Fiesta Bowl Board of Directors -- becoming the first black president of a major collegiate bowl game.

And while the present foreshadows further time apart, familial sentiments remain between father and son.

"(Powers) knows my calling, where I am in my career now, is to continually make sure that I maximize the blessings that God has given me," Kevin said. "And it truly is out of love -- it's really for the family."