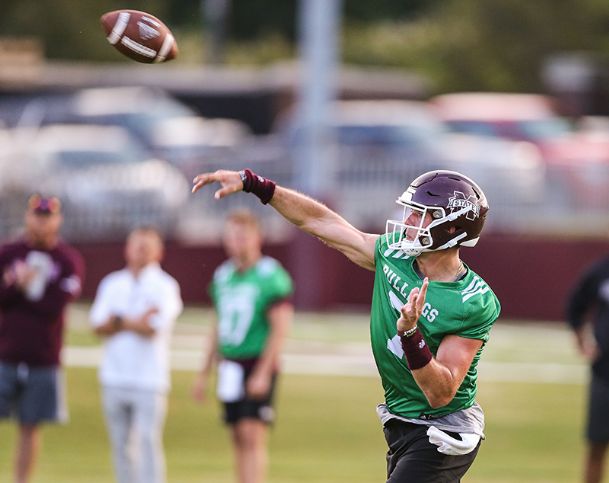 Mississippi State quarterback Tommy Stevens has been named the team's starter for the season opener on Aug. 31. Photo by: MSU athletics

MSU coach Joe Moorhead announced Thursday that Penn State transfer Tommy Stevens will be the Bulldogs' No. 1 signal caller for the season opener against Louisiana Aug. 31 in New Orleans.

"We need to strike a chord of balance in the pass and the run game and Tommy's arm strength, his ability to read and his accuracy is going to allow us to take that positive step forward in the pas game," Moorhead said.

Stevens committed to MSU May 17 following four years in Happy Valley. He finished his Penn State career 24-of-41 for 304 yards and four touchdowns passing and notched another 506 yards and eight touchdowns on the ground in 23 career games.

Having played for two seasons under Moorhead at Penn State and another two years in current Nittany Lions offensive coordinator Ricky Rahne's scheme, Moorhead said Stevens walked into the competition with a vast knowledge of MSU's offensive system.

"When you're going into essentially year four of being a quarterback you can hit the ground running and not have to go in somewhere and learn something completely new," Moorhead said. "I think it made the transition a lot quicker."

Following the departure of incumbent starter Nick Fitzgerald, Stevens and junior Keytaon Thompson competed throughout camp for the starting job. Moorhead and his staff tracked completion percentages, explosive plays and turnover numbers in order to determine the starter. Having seen nearly three weeks of camp, the MSU coaching staff informed the team Thursday.

Moorhead said he wouldn't get into the specific difference in completion percentage but noted it was a significant enough difference to make a decision.

"Tommy jumped out of the gate strong at the beginning of camp," he said. "KT kind of closed the gap and had a real nice first scrimmage and from that point forward Tommy created separation and continued to do that toward the tail end of camp."

Thompson left the spring as the No. 1 quarterback, ahead of freshman Jalen Mayden and early enrollee Garrett Shrader.

Stevens earned rave reviews prior to his arrival in Starkville at the Manning Passing Academy -- an elite annual camp hosted by Archie, Peyton and Eli Manning.

"Biggest surprise of the Manning Passing Academy was Mississippi State QB Tommy Stevens," Nagy wrote. "Scouts talk about how guys 'spin it' and Stevens spun it as well as anyone at the camp. We knew he was a big and athletic but he has a live arm."

A three-star recruit out of Decatur Central in Indianapolis, Stevens amassed 1,891 yards and 16 touchdowns passing his senior year. He also added 842 yards and 10 touchdowns rushing.

2. MSU women fall to No. 18 Kentucky in Lexington COLLEGE SPORTS