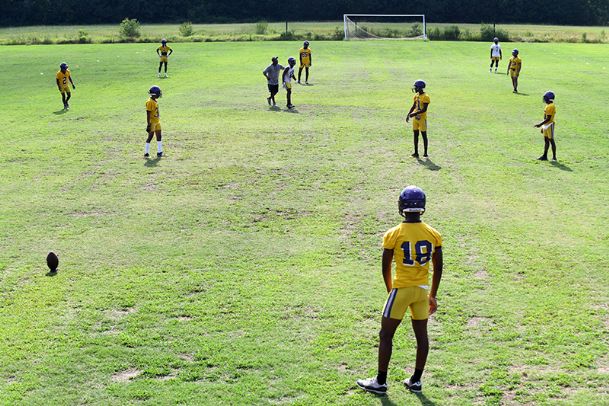 The Columbus High School football team practices on Tuesday, Aug. 6 in Columbus. The team will open their season with a game against Provine High School on Friday in Jackson. Photo by: Jennifer Mosbrucker/Dispatch Staff

Former West Point assistant coach Joshua Pulphus will make his long-anticipated head coaching debut with the Falcons when his team begins its season against Provine in Jackson.

A victory would ensure Columbus surpasses its win total from 2018 following a winless season (0-11). It would also be the first season-opening win for Columbus since 2016.

"The mood around our team lately is pretty good," Pulphus said. "Our kids know it's a day-by-day process. We've had good practices this month, fine tuning different things and now we want to get it going before we go into district play. That's the purpose of these games is to get you prepared for those."

On paper, the matchup seems fairly balanced considering Provine went just 3-8 a year ago. The teams haven't played against each other in the last decade and neither team is putting much stock in the other's previous record.

"Columbus has a rich tradition of football," Provine coach Tim Wilson said. "Their record last year doesn't say anything to me. If you want to compare records, we only won three games last year. Now, Provine is a football school also. Friday night, two programs are going to be competing for where they want to be at in the big picture."

Pulphus added while Provine hasn't had much on-field success, it's had a history of producing high-caliber athletes that thrive at the next level.

"(Provine is) a school that while their record hasn't been as good as they'd like, they've probably averaged a Division I kid once every two years," Pulphus said. "We're not going to be monitoring one kid. They're tall at receiver and strong at running back. We'll have our hands full."

One of those talents will be on display Friday. When Provine's on offense, all eyes will be on four-star wide receiver Deion Smith, a Mississippi State commit. Smith, the No. 2 recruit in Mississippi for the 2021 class according to 247sports.com, caught nine touchdowns for Provine last season.

"He's a special kid and has a lot of talent," Wilson said of the 6-foot-3 wideout. "But with that comes the challenge of thinking of ways to be creative, because people know him and what he's capable of."

If Smith lives up to his billing, Columbus defensive backs Kam Jenkins and Chris Johnson will have their hands full.

"He's a talented kid, no question, but that team is talented enough where you can't say, 'I'm just stopping one,'" Pulphus said. "You have to trust our secondary to go against those guys, to go against some good ball players."

Wilson said Provine may play two quarterbacks throughout the contest and could run different formations. But more than likely, running back Marktavis Reed will shoulder a huge workload. Reed ran for 708 yards and three touchdowns while playing in a two-running back system in 2018, but he's expected to see an increased workload this year.

"From what we see, Marktavis is a good, strong, big power stocky back that can score," Pulphus said.

Pulphus said there isn't any added pressure on his players to make a statement Week 1, and knows player development can take time.

"Our mindset isn't about the other team," Pulphus said. "If we can do little things right, such as blocking and execution of plays, the chips will fall where they may. If we do that, whether we win, lose, or draw, we'll walk off the field with our head held high. We just have to do our part."