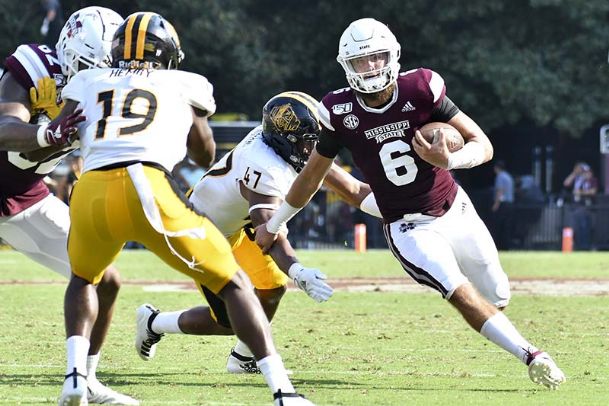 A Penn State recruiting target at the time, Stevens played host for Shrader during his official visit to Happy Valley.

Roughly 1,095 days since that initial meeting, it was Shrader who replaced Stevens when the latter went down with an upper-body injury at the tail end of the first half in Mississippi State's 38-15 win over Southern Mississippi on Saturday.

"My relationship with him -- he always helps me out," Shrader said of Stevens. "I always talk to him. He guides me. I give him a lot of credit for where I'm at on offense."

As Shrader strode along the sideline, whipping his matte white helmet onto his feathery brown-haired head, Moorhead pulled him to the side.

"Don't screw it up," he quipped to his long-time recruiting target turned first-string quarterback.

Stepping onto the field, reality set in. There's the old cliche of how quickly the game moves in one's first collegiate action -- Shrader doubled down on that stance.

"The scout team does the best they can, but when they run their stuff full-speed it's different," he said. "It just took me a little while to adjust to it."

Shrader's words aren't without merit. Dating back to spring ball, Moorhead conceded his talent is evident but the speed of the game was what held him back to that point.

"He's swimming a little bit just from an understanding and a speed of the game, but he's got a lot of ability and a lot of potential, and I think you see that," Moorhead said following MSU's second scrimmage of spring practice. "Sometimes he'll make a throw in practice, and it's a completely wrong read, but it's a laser, and it's caught, and it's a big play."

Tactically, Shrader was on point. He finished the afternoon 7 of 11 for 71 yards in just over two quarters of action and completed six of his final eight throws.

He also came agonizingly close to his first career touchdown pass when junior receiver Osirus Mitchell completely misjudged a surefire touchdown in the right corner of the end zone.

"He didn't have those big deer in the headlight eyes," Moorhead said of Shrader. "He just got in there."

Of course his start was not without a handful of hiccups -- though they were caused more by his grizzled beard than his right arm.

The second occurrence came as MSU drove down within the USM 5-yard line. Diving forward on a 1-yard run, Shrader's helmet was again jarred loose and began rolling toward the goal line.

As he arrived on the sideline, quarterbacks coach Andrew Breiner jokingly reamed the freshman signal caller over the phone, communicating that if his helmet came off one more time he would shave his wiry beard himself.

Pulling his helmet as tight as it could go, Shrader returned to the game.

"I think I'm going to keep it," he said through a wry smile postgame.

Speaking with the media following the win, Moorhead would not commit to Stevens' status for next week's game against Kansas State. Shrader was more optimistic, going as far to say he would be back to face the Wildcats.

Later reflecting on his official visit in which Stevens took him out to eat, Shrader said he's long owed the former Nittany Lion dinner.

After guiding the Bulldogs to victory Saturday, he figures now feels like an appropriate time to return the favor.