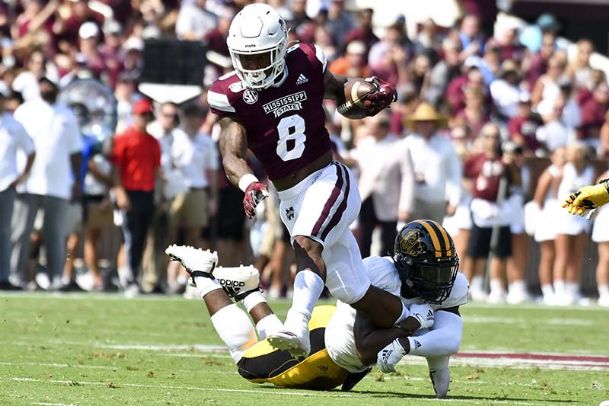 Just minutes earlier, starting quarterback Tommy Stevens was pulled from the game with an injury. Now it was Hill lying on the ground, audibly grimacing as he grasped his right ankle.

After a short reprieve, he was helped to his feet and into the locker room the MSU training staff. A chorus of cowbells rang out in appreciation of his service.

Hill was listed as questionable to return at half time. He quickly quelled those doubts as he took a handoff on the first play of the third quarter five yards to the MSU 25.

In all, Hill finished the day with 127 yards and a touchdown on 14 carries.

"It happens, it's football -- it's a contact sport," he said postgame. "I went in there, got it looked and I was fine and I ran for more."

Though injuries are always a lingering concern, Hill's importance to this year's Bulldog team through two games cannot be overstated.

Entering this week's contest against Kansas State, MSU is 8-1 when Hill rushes for 50 or more yards in a game and a perfect 5-0 when he eclipses 100 yards. Conversely, the Bulldogs are 9-8 when the Columbus native does neither.

Now two games into his junior year, Hill has totaled 320 yards and two touchdowns on 41 carries. His 320 yards this season lead all Power Five conference running backs and rank No. 2 nationally while his 7.8 yards per carry sit No. 2 in the SEC among players averaging 10 carries or more per game.

Schematically, Hill's dynamism has also aided in MSU's improved passing game. A big play threat each time he touches the ball, both Louisiana and Southern Miss stacked the box at times to combat his home run-hitting ability.

"Collectively as an offense we've been able to do some really good things and obviously having Kylin back there really helps," Stevens said.

"The better you run the ball, the more if forces people to support the run by either numbers or pressure and when you do that you are able to create some one-on-one match-ups on the back-end," he said Monday. "That allows you to get some balls thrown and create some explosive plays. I think that is what you are seeing."

Physically, it's Hill's athleticism that makes him so dangerous as a runner. At 5-foot-11 and 215 pounds, he's slight in stature but massively muscular. Moorhead characterizes him as a big-back in a small-back's body.

His athleticism was on full display this past Saturday as he twice leapt over USM defenders and seemingly deflected off a new Golden Eagle with each ensuing carry.

Senior center Darryl Williams quipped Hill had insinuated he might have to change his number to No. 23 as an ode to Michael Jordan and his famed hops.

"Maybe fake low and go high," Moorhead said of how he'd tackle Hill. "I don't know, but I would not recommend that either because the problem with going high is that he is built like a tank. If you decide to tackle him above the waist, there is a pretty good chance you are going to get trucked."

MSU running backs coach Terry Richardson said Hill could see as many as 230-250 carries this season. Hill is currently on target for more than 260 should MSU make a bowl game.

With Stevens' availability potentially in doubt for Saturday's meeting with Kansas State, Hill -- who is averaging 20.5 carries per game -- should expect another heavy workload.

But having already torched Kansas State in last year's meeting for 211 yards and three total touchdowns, Hill maintains confidence ahead of MSU's first game against a Power Five opponent this season.

"Everyone is feeling really confident," he said. "Offensively we've all got that swagger."