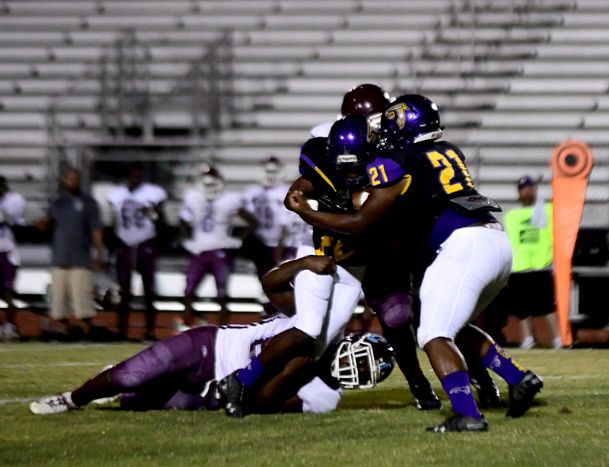 Two Lanier defenders try to take down a Columbus ball carrier despite the efforts of the Falconsâ Darion Mosley (21). Columbus beat Lanier 13-12 on Friday night. Photo by: Jennifer Mosbrucker/Dispatch Staff

After he disembarked from his players' shoulders, after his yellow Falcons baseball cap was restored to his head, Columbus coach Joshua Pulphus stood on an emptying field and smiled.

Pulphus and the Falcons had just broken a 20-game losing streak by edging Lanier 13-12, and the first-year head coach was excited for his jubilant players first and foremost.

"They deserved it, because they worked so hard," Pulphus said. "They had a long summer, a hard summer. The kids played hard. They didn't quit. And they just kept fighting."

"For us to get this first W," junior quarterback Ethan Conner said, "it's just a lot of confidence."

The Falcons wouldn't have much confidence -- and certainly not a win -- without the game Conner turned in Friday.

On the first play of the third quarter, Conner took the snap, faked a handoff to Jakaylin Lewis, fooled the entire Lanier defense and sprinted down the right side of the field to gain 47 yards and put the Falcons in the red zone.

He took off again on third and long, going up the middle to score Columbus' first touchdown.

"I think that was really big," Conner said. "It helped us change the momentum of the game and come out with a win."

Conner's play on the drive was instrumental, but the Falcons needed more. Lanier kept the tempo up, ran the ball consistently and retook the lead on Christopher Jones' second touchdown of the game, a go-ahead 2-yard score with 10 minutes, 35 seconds left in the game.

Michael Mosley handled the ensuing kickoff for Columbus after Jones was stuffed on a two-point conversion attempt, taking the ball down the left side.

As Conner and his teammates jumped up and down and screamed on the Falcons' sideline, Mosley stayed on his feet, spun away from a Bulldog defender and sprinted into the end zone, finishing off the 80-yard touchdown return.

"I still haven't seen Michael since he scored, so I don't know where he ran to," Pulphus said.

Mosley's score gave the Falcons a narrow lead at 13-12, and a stingy defense fought hard to hold it.

Columbus stuffed a fourth-down run by Kobie Benson with 6 minutes, 40 seconds left and stopped another fourth-down try by Jones from the Falcons' 26 with 1:40 to go.

"Those big stops, that's all you can ask for from guys," Pulphus said. "They stepped up, and they played well."

With the second stop, the Falcons were able to run out the clock to put the seal on a long-awaited first win.

"We're gonna enjoy this one, give them a 24-hour period and come back Monday ready to go," Pulphus said.

Columbus' next game is on the road against rival New Hope (2-3), which beat Aberdeen 51-0 on Friday.

2. MSU women fall to No. 18 Kentucky in Lexington COLLEGE SPORTS