Caledonia bounces back with victory against Nettleton 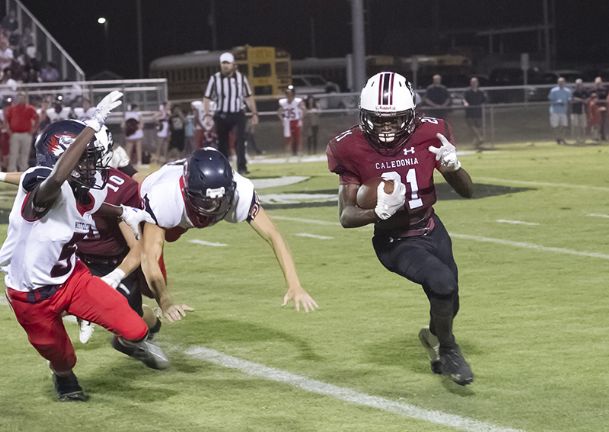 By David Miller/Special to The Dispatch

"We got our rear end kicked," Kelly said.

Friday, in the Confederates' final non-district game, they recaptured the focus, fire and execution that was lacking a week ago, rushing for 366 yards in a 41-20 win over Nettleton.

The Confederates were locked in from the opening whistle, scoring on their first two plays: an 89-yard kickoff return by Anthony Triplett and an 88-yard run by Darrius Triplett.

The Confederates (3-2) only attempted one pass - an incompletion - but it didn't matter, as they saw Kewon Wyatt rush for 148 yards and Darrius Triplett notch 140.

Kelly said the team's practice Monday was a "character check."

"When you go over there and don't play well and don't execute well, it's easy to come back on a Monday and [not be focused]," Kelly said. "These kids don't do that. They want to get better. They understand where they made their mistakes. These kids prepare well in the film room and on the field. That'll take us a long way this season."

The Confederates already have as many wins as they did all of last season, Kelly's first as coach. Kelly said he's been impressed with his team's maturity and growth, and he's excited to see them make a run for a playoff position.

"We're still a junior and sophomore-laden team with about eight or nine seniors that have bought into what we're trying to do here," Kelly said. "They keep chugging us along. We got to get better with some of those leadership roles, but our underclassmen are really growing up. That's the biggest difference."

The Confederates carried a 14-7 lead into the second quarter and used the ground game to submit the Tigers just before the half. Wyatt had runs of 29 and 28 yards on a four-play drive that put Caledonia up 21-7. He then reeled off a 24-yard run on their next possession, an eight-play, 65-yard scoring drive. That drive featured runs from five different players and was indicative of a healthy option offense, a continual area of focus for Kelly.

"We pride ourselves on being able to run the triple option, and we just haven't been able to put the fear in people of running dive, the quarterback and the pitch," Kelly said. "We made a concerted effort this week at practice to run the option on people and hit the veer and the midline, which makes our outside runs even better. We got enough speed this year where if we get you focused on the inside, we can hit you outside, and we got enough people to make you miss. We got to spend another week on getting our fullbacks and quarterbacks established in our option game."

Barker said that, once the 'Feds went up by 21, Nettleton's defensive front started to "go soft."

"It was just a lot easier for us to do what we needed to do and put up more points," he said.

Barker was also a key cog on Caledonia's defensive front, which racked up four sacks and forced a fumble. The Confederates also held the Tigers to just three yards on 20 carries.

"Our guys up front, that's probably one of the biggest areas of improvement," Kelly said. "It helps when you have guys back like Hayden Barker, guys that played last year. They're a little bit more mature in the system, a little bit stronger and a little bit faster.

That was the difference tonight -- us being able to create negative plays, which kind of offset some of the dumb penalties we had."

The Confederates play at Shannon (1-4) next week, the first of three road games over the next four weeks.