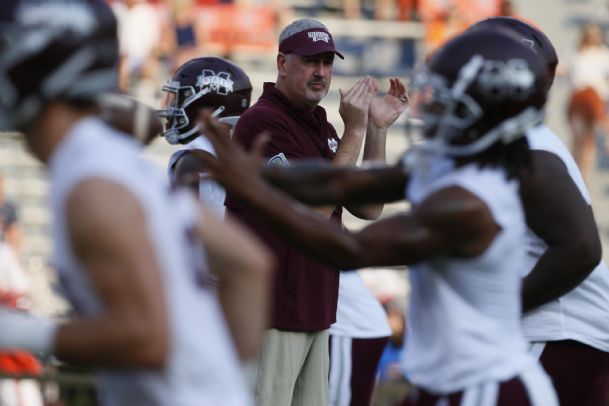 STARKVILLE -- Joe Moorhead isn't going anywhere -- at least not yet.

Asked at his weekly press conference Tuesday, Moorhead said he had not been contacted by Rutgers officials regarding their opening for a head football coach.

"I guess it's getting toward that time of year," he said. "We ask our players to be focused on the task at hand and right now I'm focused on us getting better tomorrow, us doing a great job recruiting this weekend and doing what we need to do with the team next week to find a way to beat Tennessee next week."

Ash concludes his time in Piscataway with an 8-32 record. Tight ends coach Nunzio Campanile will serve as the interim coach.

As for Moorhead, though he doesn't have direct ties to Rutgers, he does have plenty of experience in the northeast.

A Pittsburgh native, he spent four years as the head coach at Fordham --his alma mater -- before becoming the offensive coordinator at Penn State for the 2016 and 2017 seasons.

Prior to Fordham, Moorhead spent three years as an offensive coordinator and quarterbacks coach at UCONN between 2009 and 2011. He was also a graduate assistant at Pitt during the 1998 and 1999 seasons.

Through five games, Moorhead has guided MSU to a 3-2 overall record and 1-1 mark in the SEC. In his first season in Starkville he helped the Bulldogs to an 8-5 on field record and an appearance in the 2019 Outback Bowl.

2. Football has been EMCC's 'livelihood,' but Lions must adjust to a new way of life for now COLLEGE SPORTS

3. Analysis: How Mississippi State is hitting on under-the-radar prospects in the 2021 class COLLEGE SPORTS

4. To repeat last year's success, Columbus Christian Academy football must depend on everyone it's got HIGH SCHOOL SPORTS