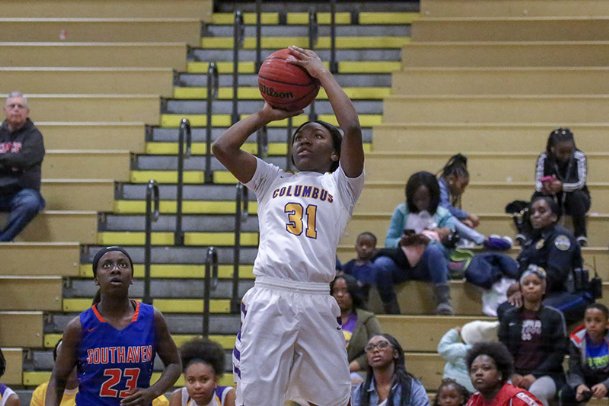 Aniya Saddler will be perhaps the most critical of the Columbus girls basketball team's four seniors this season. Photo by: Dispatch file photo

Bri Smith is counting down the days.

Ten until her Columbus High School girls basketball team plays in its jamboree event at Itawamba Community College in Fulton. Seven more until the small forward starts her senior season at the Choctaw Central Tournament on Nov. 2.

Plenty has changed since the Falcons' 2018-2019 season came to an end with a tough loss to Greenville in the second round of the state playoffs. Columbus lost six seniors, including star Hannah White, moved down from Class 6A to Class 5A and will enter this season facing new competition with a young, largely unproven team.

Despite the players Columbus lost and the plethora of new faces on the team, Smith remains confident: The Falcons can not only match last year's 23-5 record but improve in it.

"We've still got people coming up," Smith said. "I'm expecting us to go farther than we did last year and possibly win in the championship."

Smith and fellow seniors Sercora Tate, Nitirah Barry and Aniya Saddler will be leading that charge for the Falcons this season. Saddler, in particular, has been drawing recruiting interest from area junior colleges, and her teammates know her importance.

"Once she gets in the game and they see what she can do, there's gonna be a lot of pressure on her," Barry said.

To counter opposing teams' preparations, Smith said, Saddler will have to take more outside shots rather than continually driving to the basket -- a problem that will affect the team as a whole. Last season, shooting was one of the Falcons' strengths, but a lot of the team's best markswomen have departed.

The Falcons have plenty of height among their sophomore and junior classes, something Barry is happy to see when the starting lineup needs relief.

"We've got a starting five, but we've got a whole new six coming on," Barry said.

That depth is especially important because Columbus' seniors don't have a ton of game experience, coach Yvonne Hairston said -- last year's seniors played the bulk of the minutes.

"We're just gonna have to wait and see as far as how well they can handle game situations," Hairston said.

She'll need her four leaders to take a leap this season, to consistently show in games what they've learned at practice.

Those lights will illuminate a variety of new places this season with the Falcons' switch to Class 5A play. Smith said a slower pace in 5A should benefit the team, but the adjustment won't be easy.

"When you're going into different arenas, the crowd and the fans make a big difference in the kids' play, especially being 15, 16, 17 years old," Hairston said. "That makes a big difference."

New Hope, which Columbus will face on the road Jan. 17 and at home Jan. 31, is now a district opponent, as are Grenada and West Point. The Falcons always look forward to their matchups with Starkville, including Nov. 12's home game, and they're also excited to face Pontotoc on Nov. 14.

"When I see them, I look at us," Smith said of Pontotoc. "How we were last year and a little bit of this year. They've got a lot of players that we can match up with."

Even before the Falcons reach that matchup, Hairston said, a good barometer for their season should already be set. As for where it will be set, though, the Columbus coach has no idea.

"Our first four games, either we're gonna go 0-4 or 4-0," Hairston said. "It all depends. We've got some really tough games really early."

Whether it's an old Class 6A rival in the Yellow Jackets or a new district foe like the Trojans, everyone on Columbus' schedule wants a piece.

The Falcons wouldn't have it any other way.