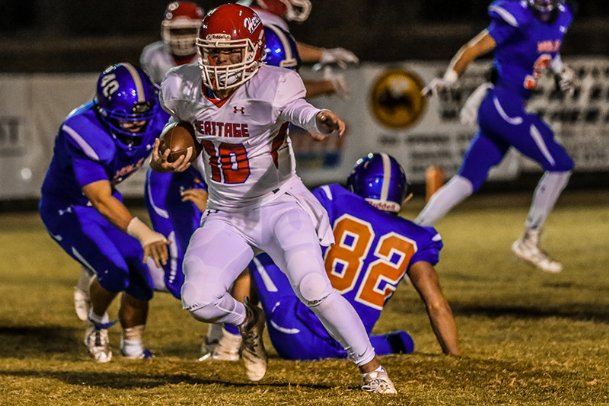 Heritage Academy quarterback Carter Putt scrambles for a first down during the first quarter. Photo by: Mike Brown/Special to The Dispatch

STARKVILLE -- Noel Fisher was confident. He'd done it before, after all.

The Heritage Academy senior, who handles the placekicking duties as well as playing receiver and defensive back, had passed to offensive lineman John Jackson for a two-point conversion against Tuscaloosa Academy two weeks ago.

So on Friday night, with the top-ranked Patriots scoring to go up 26-0 over rival Starkville Academy on the road, coach Sean Harrison called Fisher's number again.

Heritage Academy lined up in an unusual "swinging gate" formation -- designed to catch defenders off guard -- and snapped the football. Just as the Pats had practiced during the week, Fisher caught a lateral behind the line of scrimmage and heaved the ball toward the end zone in the direction of 6-foot-4 wideout Jared Long.

Long hauled it in to make Fisher 2 for 2 on two-point throws this season -- and to finish a two-point conversion Harrison never expected to be successful.

"That play never should have worked," Harrison said. "It's a terrible call."

As bold and unlikely as it may have been, the trick play served as an effective exclamation point as the Patriots (10-0) stayed undefeated with a 42-7 rout of the rival Volunteers (6-3). Heritage Academy scored all 42 points in the first half, capped off by a 40-yard touchdown pass from senior quarterback Carter Putt to Fisher with 35 seconds left, to leave no doubt and enact a running clock for the second half.

"We knew we had the team to do it, so we just came out and handled business like we do every week," senior running back KJ Smith said.

Smith was instrumental from the start in Heritage Academy's offensive onslaught, converting a huge third down on a throwback screen when the Pats were pinned deep on their first possession. He took Putt's toss down the left sideline for a 34-yard gain that put the Pats near midfield and quieted the Starkville Academy home crowd.

"KJ gave us that spark, and it was just on from there," Harrison said.

Smith ran down the right sideline for a 29-yard score five plays later to cap an 85-yard drive and put the Pats on the scoreboard first.

And Heritage Academy was far from done, scoring twice more on a 9-yard pass to Long and a 27-yard pass to Sam Hannon within a span of three minutes.

Just minutes later, the Patriots got unconventional to score yet again. From the Volunteers' 6-yard line, Smith took the handoff in the wildcat formation, but he wasn't planning on taking off and running as usual. Instead, he dropped back and held the ball. Held it "for an eternity," Harrison said. Then he found senior fullback Davis Fitch for the short score.

Fisher's throwing arm -- and Long's height -- prevailed on the two-point play, and Heritage went up 28-0.

A pick-six by Banks Hyde and Fisher's 40-yard catch-and-run touchdown capped an absolutely dominant half by the Patriots' offense, though Heritage Academy's defense was just as solid.

"We most definitely stepped up and dominated the front line," Smith said. "Pretty much everybody stepped up that we needed to."

The Pats put constant pressure on the quarterback, limited chunk plays and continually broke up any passes downfield.

Futral's 15-yard connection with Dylan Starke in the second quarter was the Vols' only score, and as it came with Starkville Academy already down 35-0, it proved not to matter.

With the big lead -- and with it a running clock in the second half -- Heritage Academy refused to be fazed by the hype of the rivalry contest. The Pats kept the Vols off the scoreboard until zeroes flashed and the stands had emptied.

By then, Starkville Academy coach Chase Nicholson said, the Vols had already moved on from the loss. With only one regular-season game to go -- next week at Jackson Academy -- they can't afford to dwell on it.

"It's over and done with," Nicholson said. "We're gonna put it behind us. We're gonna move forward and get better from it. That's what we know we can do."

A lopsided home loss to a rival is "extremely tough," Futral said, but he's still optimistic.

"We've done pretty good so far," he said. "We still have work to do with JA and the playoffs. We're not done yet."

As for Heritage Academy, Harrison is looking forward to next week's game, too. Trying to get to 11-0, the Patriots will host Washington for their senior night.

And at halftime of that game, they'll honor the 1986 state championship-winning team -- the only team in school history to go undefeated. Could the 2019 team have something to say about that?