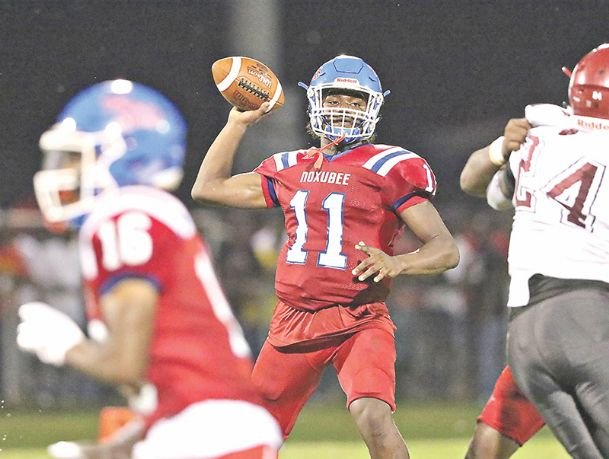 Noxubee County quarterback Marlon Windham prepares to pass the ball during the third quarter of the Tigers' game against Louisville on Aug. 23 in Macon. Photo by: Jim Lytle/Dispatch file photo

MACON -- When Travorus Hatcher moved back to Macon from Starkville and rejoined the Noxubee County football team, he didn't take to new quarterback Marlon Windham right away.

"I had to get used to him," Hatcher said.

The Tigers converted Windham from a linebacker into their starting signal caller, though the senior still plays a critical role on the defensive side of the ball.

At quarterback, Windham is still learning, head coach Teddy Young said. He's still prone to the occasional misread or late throw. But Windham has come into his own at the position -- and as a leader on both sides of the ball for the Tigers (6-5) heading into Friday's home playoff game against Coahoma Agricultural (5-5).

Just look at the game Windham played against Houston, when Noxubee County pulled off an upset win over the Hilltoppers, who were ranked at the time,

Windham threw a touchdown pass to Jeffery Malone and one to Chrishaad Rupert. He ran for a touchdown. And he intercepted three passes playing linebacker.

It was a breakout game for Windham, but Young was quick to note there are several things he still needs to work on.

Occasionally, Young said, Windham won't pull the trigger on throws he could have had. "Sometimes, he just lacks confidence in himself," Young said. "When you see it, let it go. Trust your eyes and trust your ability."

Even more concerning to the Tigers is the turnover problem that has plagued Windham and Noxubee County all year. The Tigers gave the ball away five times in a crucial district road game against Choctaw County. Two turnovers turned into touchdowns, and another gave the Chargers a short field -- they soon converted. Choctaw County won the game and, with it, the region.

"We let that one slip out of our hands," Young said. "We just couldn't take care of the ball. We were sloppy with the ball, played sloppy offensively. Those things we gotta correct for the playoff run we're going to make."

This week's practices have included efforts to right the ship when it comes to turning the ball over. Young has emphasized holding the ball high and tight as well as securing it with two hands. And with rain possible in Friday's forecast, he's also run wet-ball drills to see how the Tigers can handle inclement conditions.

Young knows that to make any sort of playoff run, starting against a solid Coahoma team, that Noxubee County simply can't afford any turnovers.

"They've got a lot of athletes," Windham said. "They're disciplined. If they're down, they're gonna keep fighting."

Where Noxubee County may have an advantage is in the passing game, as Windham noted Coahoma's defensive backs tend to give receivers plenty of space. If he can find speedy slot receivers on stop routes, it could lend itself to offensive success.

"We're coming in with a good game plan," Hatcher said.

Young plans to feature Hatcher again in short-yardage situations, as the bruising lineman offers a high chance to convert from close.

Hatcher will also get the chance to go against an offensive line that he said is big but not especially talented. He's two sacks away from his goal of 12 on the year and expressed confidence he'd surpass it in Friday's game.

"Big guys like that, I know I have an advantage because I'm quick off the ball," Hatcher said.

He and the Tigers' defense have been a strength for the team all year, including back-to-back shutouts of Louisville and Columbus to start the season.

"I feel like we have one of the best defenses in 3A," Young said. "We're gonna lean on our defense this playoff run."

Hatcher said his defense will zero in on stopping the run right away Friday, aiming to shut the door on Coahoma by halftime.

"We're just gonna come in and put them out early so we won't be in a dogfight come the fourth quarter," he said.

Doing that would pit the Tigers against the winner of Senatobia and Nettleton on Friday and get them one step closer to their ultimate goal of a state championship.

Hatcher, who's still got a year left at Noxubee County, wants it badly for his seniors.

"I'm gonna try my best just to take them to Hattiesburg, because my seniors all want the same thing," he said.