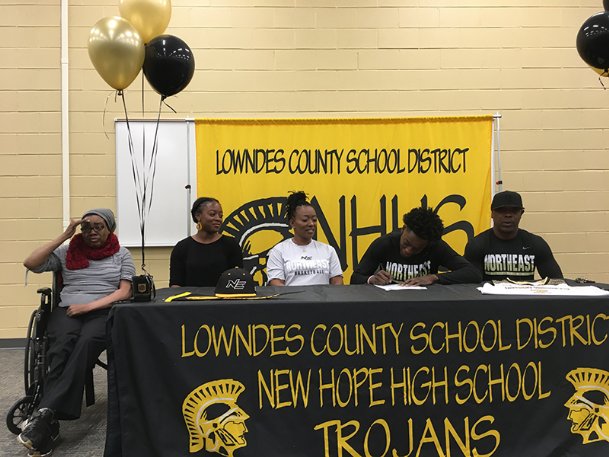 New Hope senior RL Mattix signs his letter of intent to play basketball at Northeast Mississippi Community College on Friday. His parents, sister and grandmother joined him at the table set up in the New Hope multipurpose room. Photo by: Theo DeRosa/Dispatch Staff

"Seeing two of your kids on an SEC floor together, it was pretty special," McBrayer said.

Mattix, who looked up to Thomas when the two played at New Hope, was happy to hear from him again.

"He just told me to keep playing hard," Mattix recalled.

Thomas' leadership and an insatiable drive for the game have propelled Mattix to a leadership position among the Trojans.

"He's learned from some guys that were in front of him in taking those reins and turning into an unbelievable leader for us," McBrayer said.

Mattix signed Friday to play basketball at Northeast Mississippi Community College, and McBrayer thinks he could soon be the next Thomas, the next Junkin or the next Tyler Stevenson -- a former Trojan now playing for Southern Miss.

"He's following along in those footsteps," McBrayer said.

As well as a leader, Mattix is simply the Trojans' best player -- an invaluable asset in the eyes of his coach.

"It's always nice when your best player comes out and works harder than anybody else, and that shows a lot of leadership and a lot of character," McBrayer said. "And he's done that for two years now."

Over the years, Mattix has developed a stellar mid-range game and the ball handling skills to succeed as a point guard at the next level. That's the position he'll play at Northeast, and Mattix said he's willing to work as hard as it takes to play as much as he can.

Mattix credited his success to Trojan teammates past and present.

"I love my teammates," he said. "I wouldn't be able to do it without them."

That includes freshman LJ Hackman, with whom Mattix bonded last year when Hackman was an eighth-grader. When Mattix and the Trojans' sizable senior class move on, Hackman and Caleb Parr will be left holding the reins.

"He's gonna be a leader for years to come," Mattix said.

But for now, Mattix has one final chance to bring his team together and take it to new heights. McBrayer knows it's a task the senior star can take on.

"I'm excited to see him finish out this year and then move on to the next level," McBrayer said. "He's continuing with a trend here of kids that have gone on to be successful, so I hope that he has that same desire and drive."