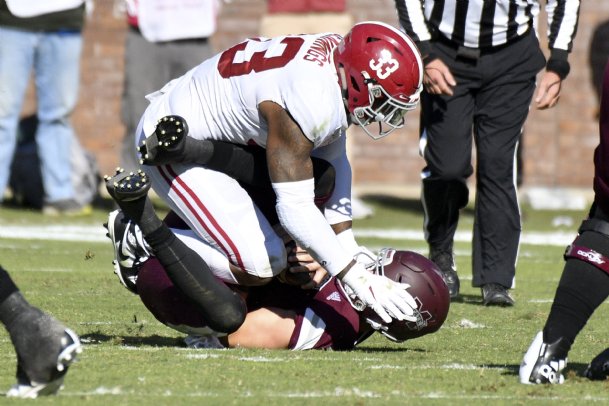 You know that expression, "It was over from the opening kickoff"?

Usually that's figurative, but Saturday, it was literal.

Mississippi State pooched the game's opening kickoff and was somehow offsides on the same play, giving No. 5 Alabama starting field position at its own 45-yard line.

Because if any team needs all the help it can get offensively, it's Alabama, right?

"The game plan with how we've been kicking and not getting touchbacks or kicking it particularly deep, we wanted to keep it out of their guy's hands," MSU coach Joe Moorhead said. "The idea was to skykick, so it was a mishit."

The Crimson Tide only needed five plays to score their first touchdown. The next two plays from scrimmage went: Mississippi State interception, Alabama touchdown. Spotting Alabama a 14-0 lead not even three minutes into the game isn't a recipe for an upset, but at least the rabies-carrying bats that infiltrated their way into Davis Wade Stadium never flocked to the field, so it wasn't a total loss. (That's not even a joke; a pregame warning about bats was actually announced over the loudspeakers).

More special teams miscues ensued. Another kickoff went a little too short, which makes me think MSU has no confidence in its kickoff coverage whatsoever. Later, confusion arose on a kickoff return that prompted poor field position for MSU. This wasn't a one-time brain cramp from the special teams unit. It's been consistently shaky enough all year to where special teams coordinator Joey Jones should definitely feel a little nervous.

Outside of one touchdown drive aided by a ill-advised Alabama penalty, MSU's offense was nonexistent. The defense didn't fare much better.

"At the end of the day, we didn't coach or play well enough to beat a team like Alabama today," Moorhead said after his team's 38-7 loss.

The fact is, the Bulldogs haven't even played well enough to keep any game with the top three teams in the SEC West respectable. Against Auburn, LSU and Alabama, MSU has lost by a combined score of 130-43. Add in the Texas A&M loss, and that number goes to 179-73. When it comes to playing with the best of the Southeastern Conference, the Bulldogs are a million miles away from relevance.

The only saving grace is MSU doesn't need to beat any powerhouses in its final two games to become bowl eligible for the 10th straight year.

Spoils usually go to the victor, but is there such a thing as a miserable 38-7 win? The Crimson Tide lost arguably their two best players, quarterback Tua Tagovailoa and standout defender Raekwon Davis. Tagovailoa might be out long term, which would be a shame for college football considering he's one of the most electrifying players in the sport. Even if Alabama wins out, the playoff committee might not be interested in awarding the Crimson Tide the final spot unless he's healthy.

Alabama was up 35-7 with just more than two minutes before halftime, but Nick Saban elected to keep Tagovailoa in the game because the coach thought his signal caller could use the experience of a two-minute drive. Unfortunately, the future first-round pick sustained a hip injury that makes his future uncertain.

"We hated that he got injured," Saban said.

In all, the best part of this game? When it ended.