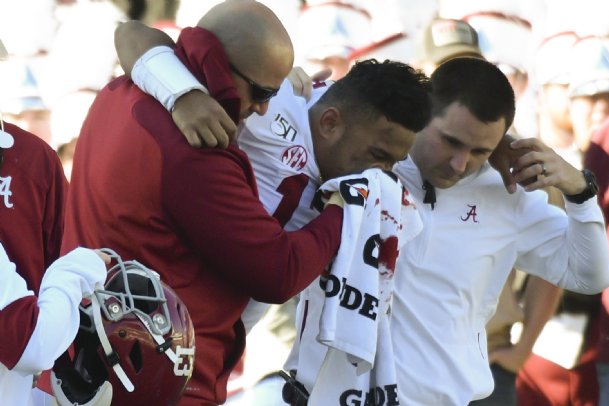 Alabama quarterback Tua Tagovailoa is assisted by team personnel after an injury during the second quarter of Saturday's game against Mississippi State at Davis Wade Stadium in Starkville. Photo by: Matt Bush/USA TODAY Sports

STARKVILLE -- Leading 35-7 with just over two minutes remaining in the second quarter of Saturday's throttling of Mississippi State, Alabama coach Nick Saban motioned toward his sideline.

Rolling to his left, Tagovailoa tossed just his fourth incompletion of the game as MSU senior linebacker Leo Lewis and senior defensive end Marquiss Spencer drove him into the turf.

Writhing in pain along the turf at Scott Field, the high-flying Hawaiian let out an exasperated yell. The Crimson Tide's nightmare had come to fruition.

After torching Mississippi State for 256 yards and two touchdowns in the game's opening half, Tagovailoa's hip injury -- as Saban would reveal postgame -- left a Heisman-sized stain on an otherwise dominant 38-7 win over the Bulldogs in Starkville.

"I do not think it is related to any other injury he has," Saban said in reference to the ankle injury Tagovailoa underwent surgery for in late October. "It is kind of a freak thing that you seldom see. I don't really have anything else to say about that. We will go from there."

"You hate it for any kid to get hurt," MSU coach Joe Moorhead added. "He's such a great player and a great representative of college football."

While the timeline for Tagovailoa remains unclear -- though reports circulating postame indicate his season is over -- his loss puts Alabama in an even more precarious situation than it already was in heading into Saturday's contest.

Coming into the game at No. 5 in the latest College Football Playoff poll -- one spot out of the projected field -- the Crimson Tide stand to lose a shot at an at-large bid sans their All-American quarterback.

Further complicating matters, senior defensive end Raekwon Davis also suffered a sprained ankle and was seen on crutches and in a walking boot in the late stages of the fourth quarter.

Saban didn't divulge more on Davis' injury status, but should he not be able to go down the stretch, it will be a major hit to an already thin Crimson Tide defensive front.

While Alabama's injuries piled up in a major way, MSU dealt with a wave of its own. Postgame Moorhead announced that junior safety C.J. Morgan will miss the remainder of the season after he was carted off with a lower-body injury.

MSU is without two of its starting safeties, as senior Maurice Smitherman suffered a season-ending injury ahead of the Oct. 19 game against LSU.

Junior Fred Peters and freshmen Collin Duncan and Shawn Preston Jr. stand to balance out Morgan's loss. Sophomore Marcus Murphy could also factor in, though he's been in and out of the lineup due to suspension.

Also of note, junior running back Kylin Hill left Saturday's loss in the third quarter with an upper-body injury. Moorhead said he is expected to be day-to-day.

"It's something you don't like to see in this game," senior center Darryl Williams said of all the injuries Saturday. "But it comes with it. It's a game that we signed up for, to put our bodies on the line. I'm just praying for those guys that they'll be healthy the rest of the way."