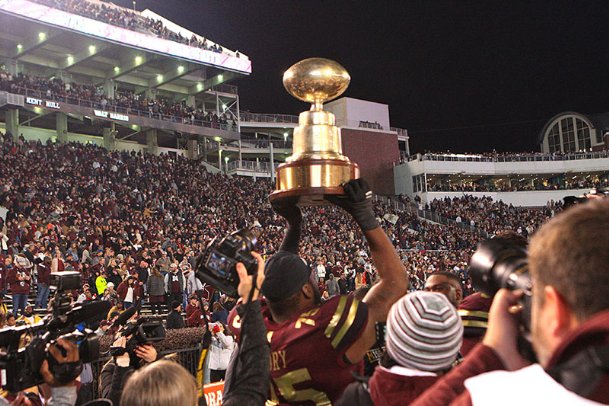 Mississippi State senior offensive lineman Michael Story holds up the Golden Egg trophy after the Bulldogsâ 21-20 win over Ole Miss on Thursday at Davis Wade Stadium. Photo by: Stan Beall/Special to The Dispatch

STARKVILLE -- Of course it ended this way.

On a drive that saw a 57-yard completion on fourth-and-24, a pass interference call that left the Bulldog faithful exasperated and a peeing-dog touchdown celebration on a potential-tying score that brought deafening silence on Davis Wade Stadium, it was Luke Logan's missed extra point that gave Mississippi State a 21-20 Egg Bowl victory over Ole Miss on Thursday night.

In a game that is known for the uncommon becoming all too common, the 92nd edition of the Battle for the Golden Egg delivered as a 60-minute slugfest of epic insanity.

First it was the surprise start of freshman quarterback Garrett Shrader -- who took over after a lingering upper-body injury from last week's Abilene Christian game forced starter Tommy Stevens out of the lineup.

Finishing the night 10 of 14 for 108 yards, it was the Charlotte, North Carolina product's feet that twice carried the Bulldogs to pay dirt. Normally mild-mannered, Shrader offered a swaggy flex toward his Bulldog brethren caked in gold and maroon body paint just above the north end zone after his second touchdown scamper of the day put the Bulldogs ahead 21-14 with just over three minutes remaining in the third quarter.

At running back, junior Kylin Hill did Kylin Hill-like things as the Columbus native raced to his eighth 100-yard game of the season -- pushing his SEC-best rushing total to 1,347 yards on the year.

Senior tailback Nick Gibson also joined the party as he totaled three carries for 57 yards and the game's opening touchdown. A former four-star recruit turned career back-up, it was Gibson's 30-yard scamper that opened the fourth quarter and furthered belief that the Golden Egg would remain in Starkville.

"It just felt amazing -- anything I could do to help my team," he said. "It's truly a blessing."

"They help, right?" Moorhead quipped of the dynamic duo.

Gay -- who finished the night with five tackles, one for a loss -- earned a game-changing fumble recovery in which he attempted to pitch the ball to senior defensive end Chauncey Rivers before falling on it once more as it crashed to the turf.

Stepping in front of Ole Miss quarterback Matt Corral's third throw from scrimmage with just over six minutes remaining, Murphy announced himself to the 57,529 in attendance with what looked to be the game-icing turnover. Destiny looked to be at work.

It was Murphy, because of course it was.

"That was her," he said referencing his mother in relation to his interception.

But as has been the case all too often this season, MSU failed to make it easy. Seconds after Murphy's pick, what had been an anemic offense for much of the year promptly delivered a three-and-out to grant Ole Miss possession with 2:06 left in the fourth quarter.

Instead of riding Plumlee -- who entered the game as the SEC's sixth-leading rusher despite having played just eight games and finished the night with 34 yards and a score on the ground -- Rebels coach Matt Luke stuck with the gunslinging Corral in an attempt to spark what had been a middling Ole Miss passing attack.

Staring at fourth and a mile -- or 24 yards to be exact -- Corral wound up and lofted a deep ball to a streaking Braylon Sanders -- who unspeakably found himself over the top of an MSU defense that Moorhead said was aligned in a prevent-formation.

"I think it was covered up until Corral scrambled around and I think we got our eyes down and let it get over our head," he said.

With Ole Miss sitting firmly on the edge of the MSU red zone, chaos persisted in the form of five penalties -- three of which were credited to the Bulldogs. But it was the lone Rebel penalty, an unsportsmanlike conduct foul on receiver Elijah Moore -- who imitated a dog urinating on a fire hydrant following his two-yard touchdown reception with four seconds left -- that backed up the potentially game-tying extra point to the Bulldog 17-yardline.

Luke, who said postgame he'd have gone for the tie regardless of the penalty, looked on in horror as Logan's kick floated right of the uprights as the thunderous clanging of cowbells erupted in the Starkville night.

Standing four yards off the line of scrimmage, Shrader received one final snap, took a knee and raced toward the MSU student section. Once there, the "unflappable" freshman signal caller as Moorhead called him launched the game ball into the stands.

"That was the best throw I made all night," he conceded through a wry smile as he left his postgame media session.

For Moorhead and the Bulldogs, a win doesn't cure all ills. Rumors swirled on social media throughout the night that MSU's lead man was "out" regardless of the result of Thursday's contest.

Addressing the speculation unprompted postgame, Moorhead made a stand at the podium as the Golden Egg trophy gleamed inches in front of him on the front right corner of the stand.

"This is my team, my school and my program," he bellowed. "They're going to have to drag my Yankee ass out of here."

Whether it's Moorhead's final time in the maroon and white or not didn't matter Thursday at 10:17 p.m. As celebratory cigar smoke crept into the press conference room, reality set in. For MSU, its school-record 10-year bowl streak lives on. Most importantly, it won the game it had to. It defeated the school up north in a contest that will live on in Bulldog lore. Because of course it did.

"I think more than anything it's a validation for our team and a validation of our culture," Moorhead said. "To me, it puts an exclamation point on the narrative floating around that I'm not the right man for this job, this program or I can't coach in this league. That's not the case. I'm damn proud of this team."