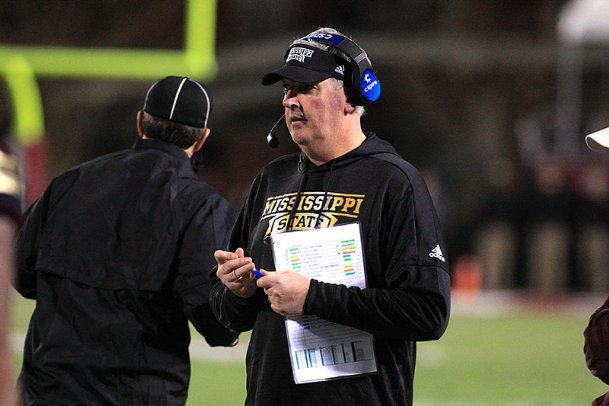 Wandering into the press conference room in the underbelly of Davis Wade Stadium following Mississippi State's 21-20 win over Ole Miss Thursday, he entered the room as a gaggle of family members watched on.

With the Egg Bowl trophy slung under his arm, the second year head coach plopped down behind the podium and began his fiery address.

In the 12 minutes and 38 seconds that followed, Moorhead spoke on his place in the MSU program, his desire to drive the team forward and, most startling, his indifference toward his own doubters.

"This is my team, my school and my program," he said. "They're going to have to drag my Yankee ass out of here."

"This narrative gets created by people who aren't involved in the decision-making process," Moorhead continued. "And I understand at times this year we didn't play like we needed to play. I mean I talked about the suspensions and the injuries and all those those things that go into it and playing the third-toughest schedule in the country and every team that we've lost to is bowl-eligible."

Forty-eight hours on from the exacerbated sermon, a source close to the situation confirmed to The Dispatch Moorhead would return next season as head coach despite rumors to the contrary.

Now locked into a third year at MSU barring a change of heart from administration -- something folks at Ole Miss are experiencing first-hand after athletic director Keith Carter relieved coach Matt Luke of his duties despite a vote of confidence last week -- it's worth examining what a Moorhead-led future entails.

Sports Illustrated's Ross Dellenger reported Saturday Moorhead met with athletic director John Cohen to discuss the trajectory of the program. And though details of the meeting have not been disclosed, it's fair to assume the MSU offense was at the center of the discussion.

Coming to Starkville from Happy Valley, the former Penn State offensive coordinator earned a reputation as an offensive guru after guiding the Nittany Lions to two of their more prolific offensive displays in school history in 2016 and 2017.

Despite that, Moorhead's teams have downright struggled in his two years at the helm at MSU. Boasting the SEC's all-time leading rusher at quarterback in Nick Fitzgerald, the Bulldogs concluded 2018 ranked 71st nationally in total offense.

As an encore performance, the MSU finished the 2019 regular season as the 65th-best offense in America riding SEC rushing leader and Columbus native Kylin Hill -- whose 1,347 yards are just 44 yards short of Anthony Dixon's single-season record.

Over that same span, the MSU passing offense has also struggled to a middling 174.5 passing yards per game.

"I think as we continue to evolve and the passing game continues to improve it will be more representative of what this system has been like over the years," Moorhead said after MSU's win over Abilene Christian Nov. 23. "It's been an incremental, sometimes slow process, but you see flashes of it."

On field issues aside, Moorhead has taken a noticeable step up on the recruiting trail since arriving at MSU. Prior to his tenure, previous head coach Dan Mullen -- now at Florida -- never brought in more than two-straight classes ranked in the top-30 of 247Sports.com's composite team rankings.

By contrast, Moorhead's first two classes at MSU ranked No 27 and 24, respectively. His 2020 class is also on pace to match the previous two as it sits at No. 21 nationally ahead of the early signing period beginning Dec. 18.

"I love recruiting," he said ahead of MSU's first bye week in October. "If you don't love it, you can't be good at it - the identification process, the communication process, the relationship development process and having the parents be able to trust myself and our staff that we are going to develop these young men as students, as people, as players and that we are going to be looking out for their best interests."

Further, while Moorhead will ultimately be held to the standard of his SEC counterparts, what other third-year head coaches accomplished this season could give a glimpse into what lies ahead for MSU.

Of the 16 third-year head coaches in college football this season, seven earned 10 win seasons in one of their first three years, while eight increased their win total from year two to year three.

With a relatively soft schedule next season, MSU should be favored in eight of its 12 games in 2020. Freshman quarterback Garrett Shrader and another top-25 recruiting class should also help stabilize the roster.

And while doubters will continue to stir, Moorhead remains confident heading into bowl season and beyond.

"No one wants more success than me and no one wants a win as quickly to get to a championship -- I get that part," he said Saturday. "I also have a sense of logic and reason and that things take time and we want to be like the 1998 and 1999 teams because they were the last ones to win an SEC championship. And we'll get there."