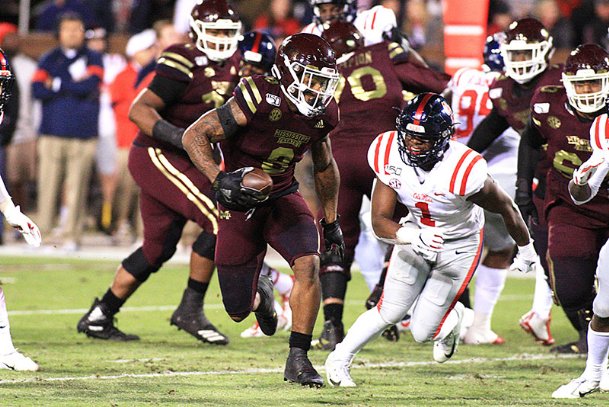 Mississippi State running back Kylin Hill runs with the ball at the Egg Bowl on Thursday at Davis Wade Stadium in Starkville. Photo by: Stan Beall/Dispatch file photo

STARKVILLE --Junior running back Kylin Hill peered into the camera.

Cracking a half smile, Hill's maroon suit and white shirt glimmered under the luminescent glow of a flashing camera.

With the white plastic of a football garnering the Mississippi Sports Hall of Fame's logo facing toward the shot, the Columbus native was showered with praise as he collected the 2019 C Spire Conerly Trophy -- honoring the best collegiate football player in the Magnolia State.

Beating out a pair of quarterbacks in Ole Miss' John Rhys Plumlee and Southern Mississippi's Jack Abraham, Hill became the ninth player in MSU history to garner the award since its inception in 1996.

"It's really special," Hill said in a news release. "Growing up as a kid, this is an award every Mississippi athlete should want to win. I'm honored and thankful. I know [the other finalists] are all great athletes. For me to win it, it's a compliment."

Tuesday marked a culmination of one of the most prolific rushing years in program history. Sitting just 44 yards shy of Anthony Dixon's single-season record, it's a midseason shift that has put Hill in this position.

Struggling through a three-game run in which he totaled 92 total yards, the Columbus native refocused. Working with running backs coach Terry Richardson -- who previously mentored future NFL players Duke Johnson and Lamar Miller during his time at Miami -- Hill shifted his approach.

Gone are the days of hurdling defenders -- as he did against Southern Mississippi. Rather, Hill has looked the part of a downhill, bruising runner, despite his 5-foot-11, 215-pound frame.

"Teams previously would stack the box so I couldn't be back there making too many moves," Hill said following a Nov. 23 win over Abilene Christian. "I've just got to be decisive, see the hole and hit it."

In his first game out of the slump, Hill torched what had been a solid Texas A&M defense. Racing by defenders and between the tackles, he concluded his appearance in College Station with 150 yards and a touchdown on 21 carries.

For an encore performance, Hill notched his most prolific rushing output to date -- a 234-yard, three-touchdown performance against Arkansas in Fayetteville.

"I just had to go over the film of previous games where I didn't do well," Hill said after the game. "I had to learn when to be aggressive and when to be finesse. Once I get one-on-one I can be finesse, but when I'm with a crowd of guys I've got to hit the hole and get what I can."

Now sitting at 6-6 and 3-5 in the SEC, MSU will learn its postseason destination Sunday afternoon during ESPN's bowl selection show. For Hill -- the conference's leading rusher through 12 games -- one more contest should give him all he needs to reach Dixon's school record of 1,391 yards in a season.

With three years in Starkville already under his belt, the NFL may come calling in the New Year as well.

But those are storylines for another day. Grasping the Heisman-like trophy he was presented in Jackson Tuesday, Hill smiled. After a midseason renaissance, the dynamic tailback was coronated as the king of Mississippi collegiate football for 2019 -- just six weeks after he'd been bottled for his third-straight contest.

"Every time I talk to him we talk about this maturation period he's going through right now," Richardson said during preseason camp. "He just had his 21st birthday, (leadership) is something we talk about. We practice it and preach it because not only are we teaching these guys football, we're teaching them to be better men -- and I think he's buying into that and you're seeing the results of that."