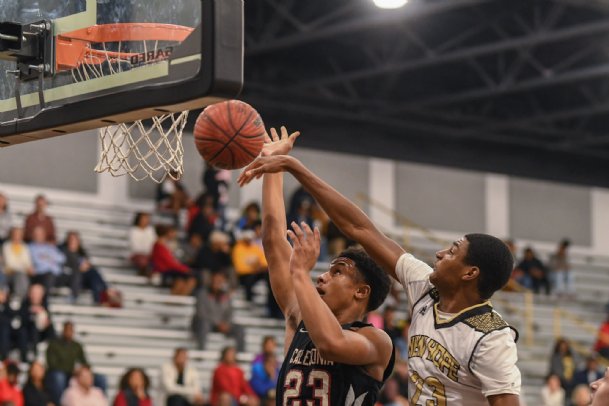 NEW HOPE -- Toward the beginning of the school year, former New Hope basketball star Terryonte Thomas came back to his alma mater to watch the Trojans practice.

"When one person's hot, everybody's hot," sophomore guard Caleb Parr said. "It's fun to be out there."

The Trojans took that motto to heart in Tuesday's home game against rival Caledonia. With New Hope leading 23-18 and just over five minutes remaining in the second quarter, Parr converted an and-one for the Trojans, bringing down the house in the New Hope gym.

And with New Hope playing lockdown defense, senior RL Mattix hit a 3-pointer, then senior Duane Hughes stole the ball and laid it in. Altogether, it was a 10-0 New Hope run in the span of a minute and 45 seconds.

The frenzy gave New Hope (5-0) the separation it needed to beat Caledonia, 81-64, and silence the trash talk Parr heard from the Confederates (4-1) before the game.

"It feels good to let the game do the talking, and that's what we did," Parr said.

While Parr played an important role with 10 points, senior guard Jaylen Smith caught fire from behind the arc. Smith drained five 3-pointers and finished with 27 points to energize the Trojans.

"He shot the ball really well, played really well," New Hope coach Drew McBrayer said. "The ball hit his hands a lot tonight when he was open, so credit to the team for finding him and him for making shots."

Tuesday, Mattix picked up where Smith left off, adding 20 points of his own to balance the Trojans' offense. For McBrayer, seeing solid games from Mattix and Parr behind Smith was just evidence: Smith's success really was infectious, and it could carry on to the Trojans' road game Friday against Pickens County (Alabama).

"It lifts everybody up," McBrayer said. "Friday night, it could be somebody else."

But Tuesday, it was certainly Smith, who didn't hesitate to pull the trigger from behind the line -- that's New Hope's style of play, anyway.

Against a defense that Caledonia coach Gary Griffin admitted was lackluster, six different Trojans sank a 3-pointer in the game.

"We just struggled defensively," Griffin said. "We didn't do a good job of paying attention to detail in terms of where their shooters were and getting out on those shooters."

Cooper McCleskey headlined a solid offensive showing for the 'Feds with 21 points on six 3-balls of his own, though Griffin noted he and Caledonia as a whole came up short on the boards.

"We gave up too many offensive rebounds," Griffin said. "Those are some things that hurt us tonight. We've just gotta go back and clean up."

While Caledonia attempts to cure its ills before Friday's game against Shannon, the Trojans will enjoy a 5-0 start after struggling to a 1-8 record last year.

"Just to start out the season like this, it's a huge motivation," Parr said. "It's a huge change. It's great."

During the New Hope girls' 62-21 rout of Caledonia on Tuesday, the Trojans held the Confederates to just one point in the second quarter and added 14 points of their own.

But New Hope coach Drew Christy preferred the third quarter, in which the 'Feds scored 10 points and the Trojans had 16.

"We had some lack of hustle and some things going on in the second quarter," he said. "As far as team-wise, the third quarter was probably the best we played this game. We were passing the basketball; we were finding the open person."

So while the scoreboard may have said otherwise, Christy was happy to see the Trojans' improvement after halftime in the areas they need to work on most.

"He's always preaching to us when we go up, we need to keep the intensity up -- not just jack up shots but just play hard, pass the ball to teammates, get open looks," senior point guard India Mays said.

Mays had seven points Tuesday, preferring to distribute the basketball as New Hope tries to do. Her eight assists helped fuel large scoring efforts for teammates Juquala Sherrod, who scored 16, and Anna Prince, who had 13. That's perfect for Christy, who emphasizes scoring off the pass rather than the dribble for the Trojans (3-3).

The Trojans' second half turned around what Christy said was "lazy offense" in the second quarter -- brought on by "lazy defense."

The Confederates (2-3), though, weren't making those extra shots. Shanti Kidd led the team with 10 points, but outside of her play, Caledonia struggled on offense throughout. The 'Feds often seemed to lack energy and effort on both ends of the court.

"The No. 1 thing you've gotta do is you've gotta play hard," Griffin said. "And tonight at times, we didn't play as hard as we needed to play."

3. Inside the development of Mike Leach's viral bandwagon and the marketing team that brought it to life COLLEGE SPORTS