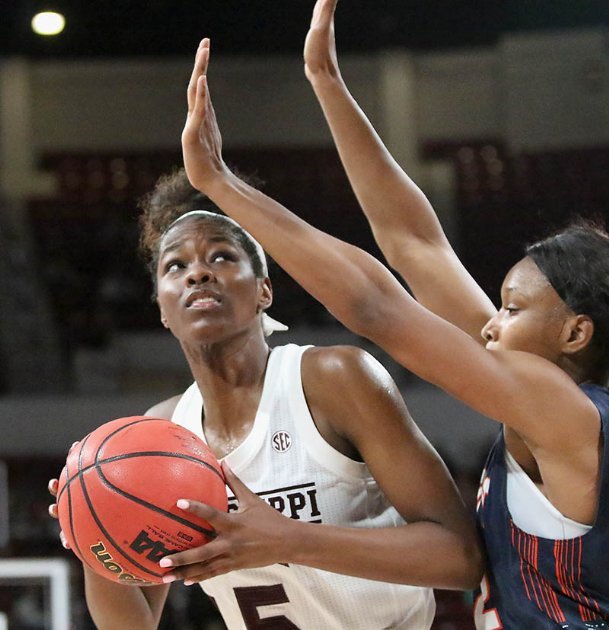 STARKVILLE -- All Rickea Jackson needed was a trip across the border.

Joining her Bulldog brethren on Mississippi State's jaunt to Canada for the Greater Victoria Invitational, Jackson scored nine or more points in all three games of the tournament while flashing the All-SEC potential her McDonald's All-American pedigree insinuates.

The first month of the season has been a feeling out process for Jackson. Despite averaging 11.2 per games this year, she began her career shooting just 4 of 18 from the field. In MSU's 124-point dismantling of UT Martin, she finished the night with 16 points on 5-of-8 shooting, quelling her initial doubters. A 13-point outing against Jackson State -- a game in which she played just 20 minutes and didn't appear until the second quarter -- also helped her cause.

"She's a really good athletic player, and we have to know where she is at all times," Jackson State coach Tomekia Reed said at the time. "We went to sleep. We let her get lost. And bringing her off the bench was key because we were practicing for her to start."

That said, Jackson's most prolific games since high school have come outside the United States.

A part of the MSU squad representing the U.S. in the World University Games in Naples, Italy, the Detroit native led the tournament in scoring during her time in Italy, averaging 22.2 points per game. Jackson was also a part of the gold medal-winning U.S. squad at the 3X3 World Championships in Ulaanbaatar, Mongolia, alongside MSU signee Madison Hayes.

Heading to Canada for the Bulldogs' stiffest contests of the year, Jackson furthered her dominance out of the country for the third time in seven months.

In games against San Francisco, Green Bay and No. 1 Stanford, Jackson notched scoring outputs of nine, 18, and 15 points, boosting her season total from 9.8 points per game entering the tournament to 11.2.

She also shot a combined 57.4 percent from the field throughout the event -- nearly 15 points higher than her season shooting mark entering the week.

"She's 6-foot-2, probably closer to 6-foot-3, she's got arms from here to tomorrow," Schaefer said of why it's difficult to guard Jackson. "It's just hard to get to her. You don't guard her on the perimeter: She'll knock it down. You come get her, she's going to go by you. She can post you up. She's tough to deal with. I think it's just her getting comfortable, and she's only going to go up from here."

While Jackson's offensive output has given the Bulldogs a second capable scorer off the dribble alongside senior guard Jordan Danberry, Schafer remains aware he needs more from the prolific prep star.

After averaging 8.95 rebounds per game in high school, Jackson's numbers have dipped substantially in college, sitting at just 2.7 boards per game. But like her recent offensive uptick, Schaefer is confident the rebounds will come -- preferably on this side of the border.

"Rickea's got to rebound more," he said. "She knows it. I know it. Everybody knows it. That's a kid that needs to be getting six or seven per night."

"She's got to help us on both ends -- offense and defense," Schaefer continued. "She's got to get us some more rebounds, and she knows it. That kid's coming (along) now."