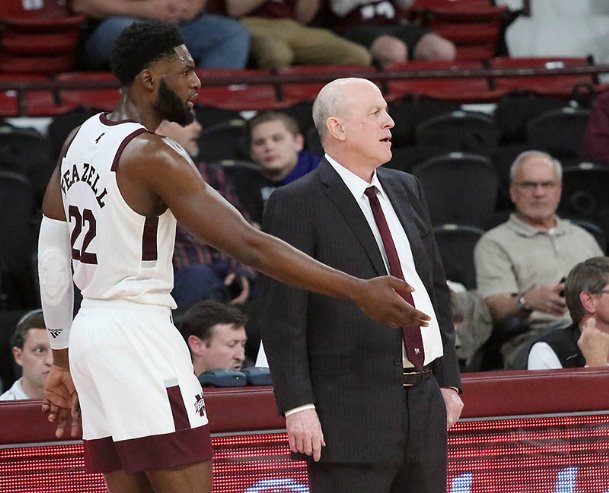 Mississippi State's KeyShawn Feazell makes a point to head coach Ben Howland during the second half against Florida International on Nov. 5 in Starkville. Photo by: Jim Lytle/Dispatch file photo

STARKVILLE -- When Mississippi State tips off against Louisiana Tech at 7 p.m. Thursday at Humphrey Coliseum, it will have been 11 days since the Bulldogs last took the court.

MSU coach Ben Howland said having that long of a layoff wasn't necessarily supposed to be the plan, but he was told earlier in the summer junior point guard Nick Weatherspoon might only serve a five-game suspension to start the year. Hoping to have Weatherspoon make his season debut against powerhouse Villanova in the second game of the Myrtle Beach Invitational, when the Bulldogs needed him most, Howland scheduled four nonconference games prior to the team's trip to South Carolina. Normally, he said, they'd play three games and move the fourth to a later date after the Myrtle Beach Invitational.

Nevertheless, Howland found out in mid-August that Weatherspoon's suspension was going to be 10 games, not five. The schedule had mostly already been finalized by then.

"We expected him to be eligible; it didn't work out," Howland said. "We weren't going to try and change it when we found out it was going to be 10 games in mid-August."

While it's unclear if the Bulldogs will show any signs off rust against Louisiana Tech, MSU's long layoff might have benefited some players that have been forced to play excessive minutes in the wake of Weatherspoon's absence.

"Playing three games in four days (at Myrtle Beach) is pretty tough on the body," MSU forward KeyShawn Feazell said. "So I feel like this has helped us a lot with recovery."

In his latest bracketology, ESPN's Joe Lunardi has Louisiana Tech as a No. 14 seed playing Oregon in the NCAA tournament, representing Conference USA. (For what it's worth, Lunardi also has Mississippi State in as an 11-seed playing Creighton in a play-in game in Dayton).

The Bulldogs' namesake enters Thursday's contest ranked No. 83 in KenPom.com's rankings with a 5-2 record, with double-digit losses coming against Creighton and Indiana on the road. Louisiana Tech, which has put together 20-win campaigns in three of coach Eric Konkol's four seasons, has three players averaging double figures through seven games.

"They're good. They're tough," Howland said. "It's going to be a tough challenge against a veteran group. They will play man-to-man, will play some zone, will press after free throws, get after you defensively and really try to pressure you."

Fans will receive free admission to the contest if they bring a canned good or a box of cereal as part of an effort to help feed students in need.

Having served seven games of his NCAA-induced suspension already, Weatherspoon is scheduled to suit up for MSU (6-1) for the first time Dec. 22 against New Mexico State in Jackson.

In the meantime, the Canton native has been practicing with the team.

"Nick's done well. He practices hard and helps us get better every day," Howland said. "He flies defensively around the ball and has made practices much more competitive. I think he's chomping at the bit waiting for his opportunity to get back out there."

Freshman guard Iverson Molinar, who just celebrated his birthday Tuesday, said going against an athletic perimeter defender like Weatherspoon in practice has benefited him in games.

"He definitely helps me. He's a tough defender," Molinar said. "Being able to compete against him really helped me grow handling (defensive) pressure."

Stewart is the lone member of that group to do all his scoring coming off the bench, and he has a team-best shooting percentage of 58 percent. Perry isn't far behind at 55 percent and a 39 percent clip from long range.

"I think any time you have a good team, you have balance in your scoring," Howland said. "The best teams I've ever coached have always had four or five guys in double figures. I love that. Any one of them can go off at any time."