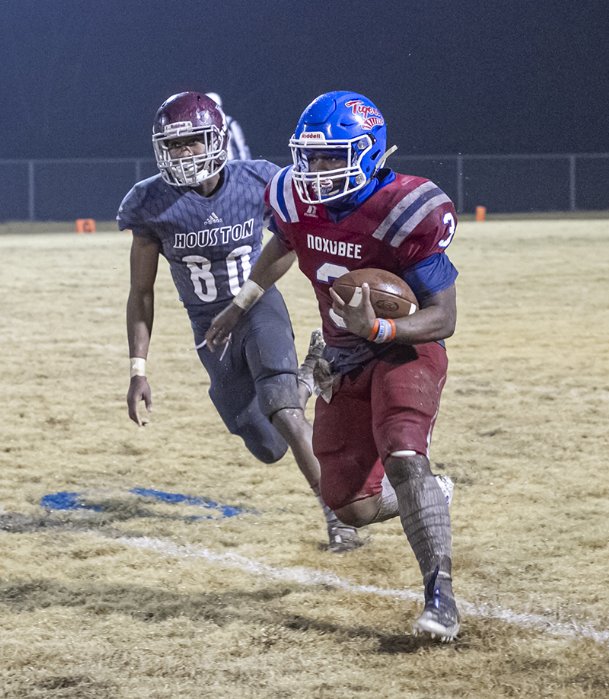 Noxubee County running back Bobby Shanklin runs the ball against Houston in the Tigersâ 14-12 triple-overtime win in the Class 3A quarterfinals Nov. 22. in Macon Photo by: David Miller/Dispatch file photo

Columbia, the No. 1 team in Class 3A and the opponent the Tigers expected to face in the state championship game, had lost for the first time in 14 games this season. The Wildcats suffered a 27-7 setback to Jefferson Davis County, which entered the contest 8-5. That meant the Jaguars and Tigers would be playing for the Class 3A title at 11 a.m. Friday at M.M. Roberts Stadium on the Southern Miss campus in Hattiesburg.

Senior quarterback and linebacker Marlon Windham said he was "shocked" to see Columbia fall, but the result is no surprise to Young, who knows the craziness that can ensue come playoff time.

"That's why you play the game," Young said. "Anybody can get beaten at any time."

With four straight playoff victories -- two at home, two on the road -- after a middling 6-5 regular season, the Tigers (10-5) have proven that rule Friday after Friday in a variety of fashions.

Noxubee County routed Coahoma Agricultural at home, shut out Senatobia on the road, outlasted Houston in triple overtime at home.

Last week, the Tigers downed the Chargers in the north final, flipping the script on a 28-18 loss in Ackerman on Oct. 24 that decided the district title. In the first game, Noxubee County committed five turnovers; in the rematch, the Tigers didn't commit a single one.

"We took care of the football, which we knew we had to do going into the game, and we forced turnovers," Young said. "We finally put all three phases together, and we played good football."

The 33-14 victory catapulted Noxubee County into Friday's final, where Young knows the team will need a similarly excellent performance to beat the Jaguars.

After losing five of its first seven games, Jefferson Davis County has rattled off a seven-game win streak, allowing just 13 points in four playoff games. That strong defense mirrors Noxubee County's, which Young and the Tigers have said week after week is the cream of the crop in Class 3A.

Noxubee County can prove that statement Friday if it can shut down star senior running back Keyser Booth and the Jaguars' run-heavy "Wing T" offense. Booth has rushed for 1,430 yards and 20 touchdowns this season, averaging 9.1 yards per carry. He'll be tough to handle, but the Tigers feel up to the task.

"I think our speed matches their speed," Young said. "We have athletes for athletes."

To stuff the powerful running game, the Tigers must watch the Jaguars' pulling guards and follow them to the football, Windham said.

But the Tigers' standout defense hasn't had many problems before with some of Class 3A's best teams. Noxubee County has allowed only 26 points throughout the playoffs thanks to its back-to-back-shutouts of Coahoma AHS and Senatobia.

Young will need more of the same come Friday to give the Tigers their second straight title in three years. A few of his players saw the field 2017 championship game, but all of them know that expectations are high at Noxubee County.

But pressure or not, Young said, his players are prepared.

"Everybody's locked in," he said. "They've worked so hard from this. They know what to expect. They know we've gotta play our best ball."