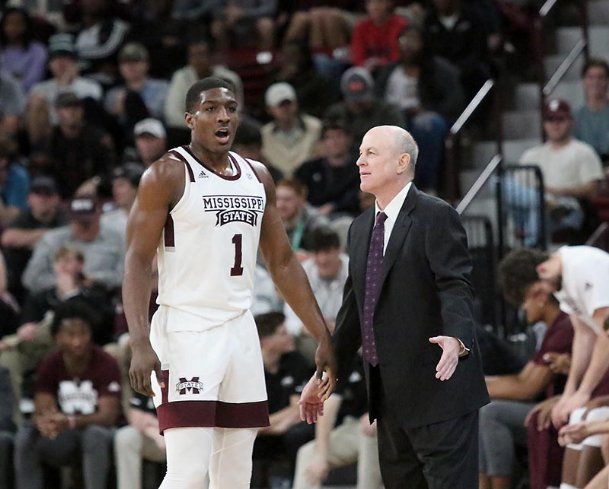 Mississippi State head coach Ben Howland talks to Reggie Perry during a timeout in the first half against Louisiana Tech on Thursday in Starkville. Photo by: Jim Lytle/Special to the Dispatch

STARKVILLE -- The ball swished through the net.

Disgusted, Mississippi State forward Reggie Perry caught it as it landed, then slammed it in frustration. The sophomore couldn't believe what was happening defensively.

Louisiana Tech had drilled another 3-pointer, the sixth of what would be 10 on the night for the blue Bulldogs.

"You have to give them credit," MSU senior guard Tyson Carter said. "They brought it tonight. We didn't."

MSU (6-2) didn't exactly lose to Sister Mary School for the Blind, as LA Tech (6-2) sat at No. 81 in KenPom.com's rankings entering the contest. Nevertheless, it's a loss the host Bulldogs could regret.

"That's a very tough loss against a very good and well-coached team," MSU coach Ben Howland said. "You have to give them credit and tip your hat."

Thursday was the first time MSU took the court in an 11-day span. It's unclear if the long hiatus disrupted the maroon Bulldogs' rhythm.

"Usually after a long layoff, you can come back sluggish," Carter said. "But there's no excuse. We still have to bring it every night and treat every game like it's the most important game of the season."

Louisiana Tech's 16 3-pointers were the fewest the blue Bulldogs have attempted in a game all season. They were just efficient with shot selection and opportunistic of missed defensive assignments.

"Disappointed with our defense tonight," Howland said. "I thought at times, our defense was really poor."

"It's going to be great for me to show our team that we took good ones," Louisiana Tech coach Eric Konkol said. "We passed up on some that we could have just shot fliers at. You talk about how good this team is, you take a bad shot, it's like a turnover, and they're going to turn it into points."

Entering the matchup, MSU was a top-five team nationally in offensive rebounding percentage. Yet, Louisiana Tech won 14-12 on the offensive glass and had a 34-31 overall rebounding advantage. Time and time again, Howland grew tired of his team allowing long offensive boards.

"I think we're having an issue of blocking out," Howland said.

Louisiana Tech took a 39-36 lead into halftime thanks to a 30-foot 3-pointer at the buzzer from DaQuan Bracey. As a team, the blue Bulldogs shot 57 percent from the floor entering the break.

Later in the second half, MSU took a 55-54 advantage, but Louisiana Tech sealed the contest with a 10-0 run.

"They have finals tomorrow. It was probably stupid on my part to schedule this game the night before finals," Howland said. "Maybe it would have been better to schedule it earlier in the week when they're not so stressed. But you can't make excuses; give them credit."

Carter had a game-high 20 points, while Perry picked up a double-double with 14 points and 14 rebounds. No other MSU player reached double figures. The maroon Bulldogs shot 47.2 percent from the floor and 11 of 23 from beyond the arc.

Bracey led the blue Bulldogs with 16 points, while Amorie Archibald chipped in 15 and went 7 of 8 from the free throw line down the stretch. Other LA Tech players in double figures were Kalob Ledoux (10), Derric Jean (10) and Isaiah Crawford (10). The blue Bulldogs shot 48.1 percent from the floor.

MSU is back in action against Kansas State on Dec. 14 in the Never Forget Tribute Classic in Newark, New Jersey.

"It's a tough pill to swallow," Howland said. "Hopefully our guys learn from it."