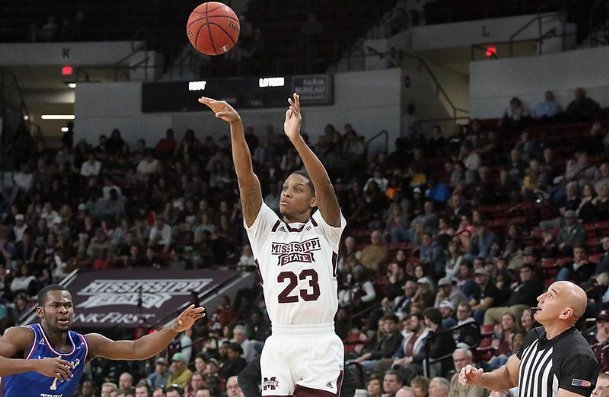 Mississippi State's Tyson Carter shoots a 3-pointer over Louisiana Tech's Derric Jean during the first half Thursday in Starkville. Photo by: Jim Lytle/Special to the Dispatch

Calling timeout with 27 seconds remaining in the first half of Thursday's 74-67 loss to Louisiana Tech, Howland gathered his squad in a huddle.

Quickly scribbling as the timeout neared its conclusion, the fifth-year head coach drew up a play in which freshman guard Iverson Molinar would drive with seven seconds remaining and look to finish or kick toward one of his teammates on the perimeter.

But instead of the downhill action Howland had scribbled during the break, Molinar settled for a 25-foot spot-up jumper.

"It's probably my fault for running that play because it's not something we've worked on a lot," Howladn said. "But I wasn't comfortable running a ball screen at the end of the possession because they were going to double it."

Just one instance of MSU's discombobulated approach to Thursday's contest, the Bulldogs looked like a sluggish shell of the team that took No. 23 Villanova to the brink just 13 days ago in Myrtle Beach.

While offensive execution remained an issue, it was the normally dependable MSU defense that looked most out of sync.

Midway through the game's opening frame, the Bulldogs allowed back-to-back wide open looks from 3-point range after a help-side defender sloughed off his man. One possession later, sophomore forward Prince Oduro stepped up court toward an inbound Bracey, who flipped a simple pass to Mubarak Muhammed for an easy layup.

"We weren't covering their roll-outs, and they were getting layups," senior guard Tyson Carter said. "We just weren't getting off to the help side. We weren't doing our jobs."

MSU's inability to guard the exterior persisted into the second half. As the Bulldogs clamped down on the interior, Louisiana Tech found open look after open look from beyond the arc in the game's final 20 minutes -- five to be exact.

"This was the lowest number of threes we've taken in a game and it's going to be great to show our team that we took good ones," Louisiana Tech coach Eric Konkol said. "We passed up on some that we might've been able to shoot flyers at, but knowing how good (MSU) is if you take a bad shot it's like a turnover and they're going to turn it into points."

"They had some open looks where we made mistakes -- really made mistakes," Howland said. "We made a bunch of mental mistakes not knowing the personnel."

This isn't to say MSU's lackadaisical effort was entirely unheralded. The Bulldogs were stagnant at best in wins over Florida International and Sam Houston State, but Thursday it cost them.

As the blue and red-clad Bulldogs flustered MSU's varying ball-handlers -- none of whom looked capable of running the point in place of the suspended Nick Weatherspoon -- Louisiana Tech aided its effort with a 14-12 advantage in offensive rebounding.

"Late in the game you could hear the crowd groan," Howland said in reference to his team's inability to block out.

As the crowd of 6,375 thinned to double digits as the clock struck zero and the ensuing handshake line neared its conclusion, Perry headed for the tunnel. With his head bowed, freshman guard Devin Butts consoled the towering big man.

On Thursday, MSU fell victim to a team it was favored to defeat by eight points by KenPom, and with it, the Bulldogs raised far more questions than those it answered in its late November swing through South Carolina.

"You can't make excuses," Howland said. "Give them credit: They beat us on our home floor."