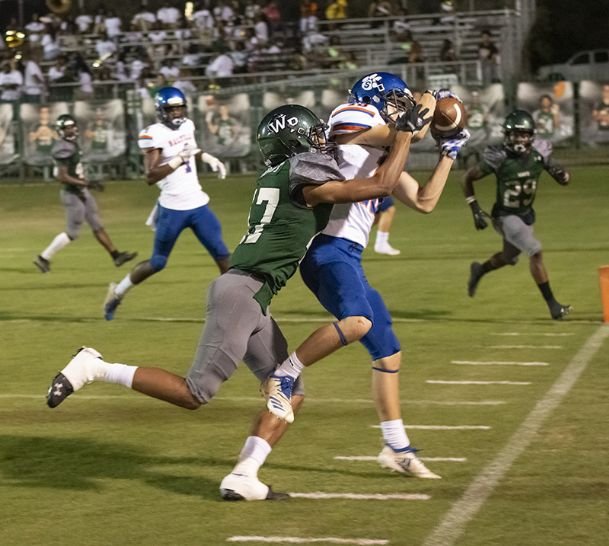 On Oct. 4, West Point held Saltillo to 14 passing yards and seven points, but Saturday against Picayune, which has the stateâs top offense, the test will be a lot harder. Photo by: David Miller/Dispatch file photo

WEST POINT -- West Point senior linebacker Tyron Orr isn't afraid of an opponent like no other.

And the first-time matchup is poised to deliver: West Point has the best defense in Class 5A, and Picayune has the best offense in the state, let alone the class.

That puts the Green Wave in a tough position, but Orr has never been one to be doubtful.

"I like the challenge," he said. "Everybody thinks that we can't stop them, but that's not new."

The Maroon Tide are a tour de force on offense, averaging 51.9 points per game. They've been held under 40 points just once, a 35-14 win over East Central, and running back Cameron Thomas has run for 3,371 yards and scored 46 touchdowns this season.

"It's just unbelievable that he put up that many yards this year," West Point coach Chris Chambless said. "He's fast, he's real slippery, not as big. He finds a seam, he'll take off and take it to the house, and that's one thing we can't let him get started on."

That's where Orr comes in. The 5-foot-9, 225-pound man in the middle has captained the West Point defense since last season, and he'll lead the Green Wave's efforts to counter Thomas' effectiveness. Just another Friday night for Orr, right?

"It's the first back I've played against that's had that many yards, but he doesn't scare me," Orr said of Thomas.

Chambless knows other players depend on Orr's talent, knowledge of the game and energy, making his role even bigger Friday.

"He's not gonna back down from anything, and that's what makes him so special to us: Other guys feed off him," Chambless said.

West Point knows it can't stop Thomas and the Maroon Tide rushing attack outright, but it can do its best to limit big plays, and that's all Chambless can ask for.

"I just think that we can't let their running backs get 10-, 15-yard carries," he said. "We know they're gonna get some, but we can't let them continuously dink us down the field and wear us down."

West Point had good practice last week against Neshoba Central and star rusher Jarquez Hunter. The Green Wave couldn't take Hunter out of the game entirely, but they held the Rockets to seven points and cut down on big plays.

Chambless expects more of the same "smashmouth football" Saturday night, and he emphasized the importance of getting off to a quick start. Orr will be tasked with making sure he keeps the defense in line to accomplish that.

"I've always said the first team that flinches is the team that's gonna get their tails whipped," Chambless said. "So we can't flinch, and he's gonna play a vital role in that, making sure nobody flinches up front or at linebacker or behind him."

Yes, even the secondary will be critical, as Picayune's offense isn't entirely one-dimensional.

"They'll lull you to sleep," Chambless said. "They completed a lot of passes this year, so they will put it in the air."

That style seems similar to what the Green Wave employs, a run-first system that depended on pass plays in key situations in last Friday's north final. Without a few play-action passes on third down, West Point might never have made it to its fourth straight state championship game.

But the team's strength is in its rushing attack: seniors Brandon Harris, Dantariyus Cannon and Jimothy Mays all carry the load. It'll be run game versus run game when the Wave and the Tide come face to face.

"We're both gonna run the football," Chambless said. "We're both gonna try to impose our will on the other one. An offensive line knows when another team's getting worn down, and that's what drives them. When they see that team wearing down, it builds them up a little bit. So we can't let their offensive line get built up by seeing us flinch."

That's a considerable challenge for the Green Wave defense, but they've backed it up all year. Now they have the chance to do it one last time against a brand-new opponent with weapons unlike any West Point has seen before.

For Orr, taking the field for the last time will be "bittersweet," though he said the impact may not hit until afterward. So he plans to leave it all on the field.

"It's my last game, and it's the championship game, so I've gotta go out with a bang," Orr said.

Kickoff is at 7 p.m. Saturday at M. M. Roberts Stadium on the University of Southern Mississippi campus in Hattiesburg.

1. 'We can win wherever we go': An inside look at Mississippi State women's basketball's assistant coaching culture COLLEGE SPORTS