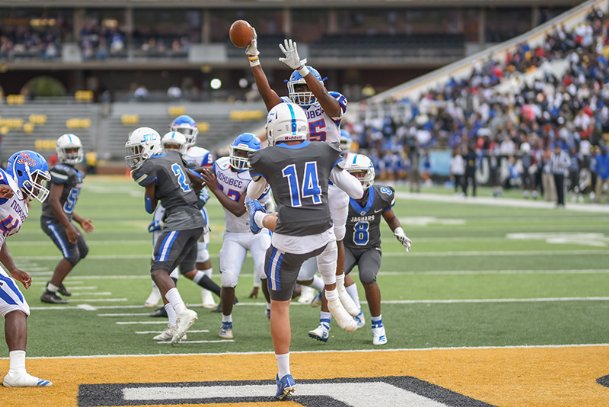 Coach Teddy Young placed a hand on Sherrod's back as the senior knelt. The medal around Sherrod's neck -- the medal none of the Tigers wanted -- hung close to the ground.

In his free hand, Young held the second-place trophy for the MHSAA Class 3A championship game. On the opposing sideline, Jefferson Davis County hoisted its first-place trophy high and swarmed around it, but Young carried Noxubee County's award low, and the Tigers stood motionless in a straight line along the hash marks, their backs turned to the celebration that had just begun.

Thus was the scene after Noxubee County lost to Jefferson Davis County 25-15 on Friday at M.M. Roberts Stadium in Hattiesburg, missing out on a chance for its second title in three years. The Tigers failed on scoring chance after scoring chance, conceded four long scores and found themselves in an unfamiliar position: on the losing end of a state title game.

Sherrod turned in one of Noxubee County's finest performances Friday, catching 10 passes for 118 yards, but he knew the Tigers were capable of more. Dropped passes -- more of them than Young had seen in any game all season -- cost Noxubee County, and Sherrod knew it.

"I feel like I let my team down," he said. "I feel like we should have won today. We messed up big time on a couple big plays. We let our coach down."

The Tigers punted on their opening possession of the second half, then failed on four separate drives, turning it over on downs three times and tossing an interception on the fourth.

Noxubee County got into Jefferson Davis County territory on all four possessions. On the most promising effort, quarterback Marlon Windham was stopped a yard short on a fourth-down run to the Jaguars' 3-yard line.

"We just couldn't put it in," Young said. "I think if we would have put it in, we probably would have had a different outcome."

The Tigers forced a three-and-out from there, got their hands on the ensuing punt and got the ball back at the Jags' 24, but once again, the Jefferson Davis County defense held. Windham couldn't connect with Sherrod or Coby Lockett on the first two plays, had a pass dropped by Jeffery Malone on third down and watched as running back Bobby Shanklin ran for four yards on fourth-and-10, ending the Tigers' hopes of cutting the deficit to a single score.

"We had good drives; we just didn't capitalize at the right time," Sherrod said. "We missed out on the big plays."

Quarterback Lyric Hall found running back Keyser Booth for a 36-yard passing touchdown to open the scoring, and three minutes later, Booth busted free up the middle for an 80-yard rushing score.

"I gave it my all for my last game of the season, and I just had to do my job for my team," Booth said.

Noxubee County got back within a score on a 33-yard touchdown pass from Windham to wideout Anthony Little Jr. in the second. Then Deandre Shorts broke a 39-yard run for a touchdown to give the Jaguars a two-score halftime lead.

Booth gave Jefferson Davis County its last big spark and a game-sealing touchdown in the fourth. He capped an eight-play, 76-yard drive that took four crucial minutes off the clock by bursting free for a 42-yard touchdown run -- more than Jaguars coach Lance Mancuso ever expected.

"I told Keyser, 'Man, you're gonna get the football. Just get us first downs,'" Mancuso said.

Across the field, Young and the Tigers were left to watch and wonder after an unexpected playoff run carried them to Hattiesburg.

"It was a great season," Young said. "I love my senior class. It was my first year as the head coach, and they bought into everything I was selling. I just wish we could have won it for them."