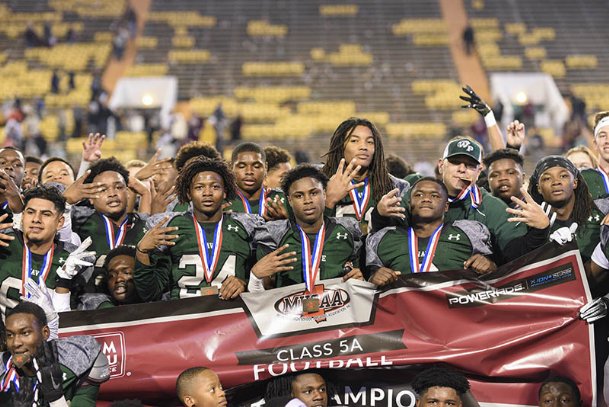 HATTIESBURG -- West Point senior running back Dantariyus Cannon could see it: The play was stuck in Corbin Kelley's head.

Kelley, a junior quarterback for the Green Wave, was still beating himself up over what had just happened late in the second quarter. The late throw on an out route he delivered. The Picayune defender jumping on it for a massive pick-six to bring the Maroon Tide within a point in Saturday night's MHSAA Class 5A championship game at M.M. Roberts Stadium in Hattiesburg.

So Cannon went over, telling his quarterback what Kelley needed to hear.

On third-and-8 on West Point's first drive in the second half, Kelley did. He fired a pass to Cannon, who picked his quarterback up again and converted the first down. Two plays later, West Point was in the end zone via a 5-yard touchdown run from Brandon Harris.

"We came down a little bit, but Coach told us to keep our heads up and just do what Wave do: just keep rolling," Harris said.

The drive put West Point up 28-20, put a stop to Picayune's momentum and gave the Green Wave the boost they sorely needed. Kelley and the Green Wave were over the hump and on their way to 38-26 win and a fourth straight state title.

"Just as good as the first one," head coach Chris Chambless said.

West Point rolled right on through to its 11th state championship in school history, matching South Panola for the most ever in the state of Mississippi.

"It's more than a team," Cannon said of the Green Wave's dynamic program. "We're just like family. I love those guys. I wish I could stay another year and play with every single last one of the guys I just played with."

The senior was instrumental in getting his team to its fourth title in a row, converting a critical fourth down on West Point's first drive to help the Green Wave match a Picayune score.

"We told Coach to go for it," Cannon said. "He had faith in us. We went for it. We just knew we were gonna get it."

Cannon did, and Harris ran left for a 3-yard touchdown on the very next play. He finished with two rushing scores, a passing touchdown and his second straight championship game Most Valuable Player award.

"He's a baller," Chambless said. "He's a dog. That joker just gets the job done. There's no adversity that he can face that's gonna knock him down."

Not even a high ankle sprain could stop Harris, who played through the injury the entire postseason and still proved effective. While Harris ran for 58 yards on 15 carries, Cannon ran for 135 yards on 13 carries, providing the foundation of the Green Wave's rushing attack.

"I told him before the game, he's gotta have a good game for us to win, and he certainly did," Chambless said of Cannon. "He does whatever we tell him to do, whatever's asked of him, he does it 100 percent."

The West Point defense, too, had big moments against a Picayune team that came in averaging 51.9 points per game and hadn't been held below 35 points all year. After Cameron Thomas capped a 13-play, 73-yard opening drive with a touchdown for the Maroon Tide, the Green Wave forced three straight three-and-outs, and the West Point offense cashed in.

Kelley found tight end TJ Anderson for an 18-yard touchdown early in the second quarter, and less than three minutes later, Harris hit a wide-open Jordan Rupert down the right side of the field for a 52-yard score. Just like that, West Point was up 21-7, with the Picayune defense caught off guard both times by unusual play designs.

"Our play-calling was excellent tonight," Chambless said. "It is each week. They're very creative in the ways they get the ball down the field."

But Picayune, which seemed a little shell-shocked when West Point took its lead, struck quickly to get right back in it.

After a West Point punt rolled dead at the Maroon Tide 24, Thomas ran 76 yards down the right sideline for a touchdown with 3 minutes, 5 seconds to go in the first half. On the first play of West Point's next drive, Jaylen Hall jumped on Kelley's pass and returned it 39 yards for a touchdown. Austin Samples missed the extra point, so West Point took a one-point lead into halftime.

"We gave up some," Chambless said. "We knew we would. It's how you bounce back and how you get back up that's gonna define who wins games."

The Green Wave got right back off the mat. They came out in the second half determined to put the Tide away, and they relied on their three senior backs to do it. Cannon snagged Kelley's for 19 yards on that critical third-and-8, Jimothy Mays ran 23 yards to the Picayune 5, and Harris took the football in from there.

Alex Harper kicked a 24-yard field goal to put West Point up 31-20, but Picayune answered again. Thomas caught an Isaac Hickman pass over the middle and went the distance for a 70-yard receiving score, though the Maroon Tide couldn't connect on their two-point pass.

West Point quickly put the game away for good. Harris connected with Anderson on a 57-yard pass over the middle to the Picayune 10, and Tae Gibbs punched in a 2-yard score on third down to bring the lead back to two scores.

Picayune brought the ball down the field, but Hickman's pass on fourth-and-7 from the West Point 10 fell incomplete, and the Green Wave went into victory formation.

West Point will lose plenty of its key players -- including Harris, Cannon, Mays, Anderson and linebacker Tyron Orr, among others -- to graduation, but Chambless is already looking forward to next season. A record-tying fifth consecutive title could just be on the horizon.

"We just do what we do every year," Chambless said. "We're getting back in the weight room Monday, trying to get back and improve next year."

2. Football has been EMCC's 'livelihood,' but Lions must adjust to a new way of life for now COLLEGE SPORTS

3. Analysis: How Mississippi State is hitting on under-the-radar prospects in the 2021 class COLLEGE SPORTS

4. To repeat last year's success, Columbus Christian Academy football must depend on everyone it's got HIGH SCHOOL SPORTS