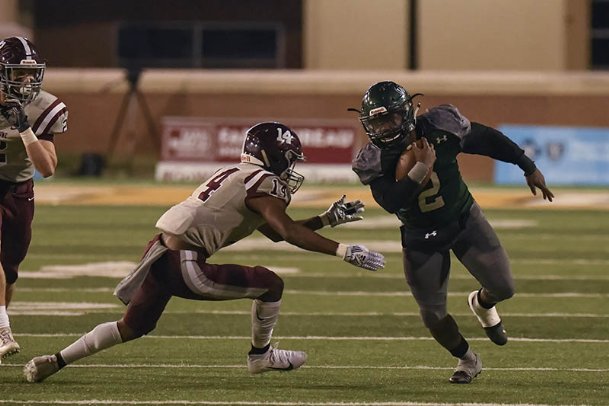 West Point quarterback Brandon Harris (2) looks for running room around the edge of Picayuneâs defense. Photo by: Austin Frayser/Special to The Dispatch

"We switch out in the games," Cannon said. "I let him get my plays. He lets me get his plays."

Outside of school, the two talk a lot, hang out, always talking about football. Even outside of practices and games, they'll go out and throw the football around.

As a result, the two have cultivated a strong relationship as the Green Wave's star running backs. Between the two of them, Cannon knows, there's nothing they can't do.

Saturday night at M.M. Roberts Stadium in Hattiesburg, in the MHSAA Class 5A championship game against Picayune, the two made that abundantly clear.

Playing their last high school game together, Cannon and Harris led West Point's offensive attack and carried the Green Wave to their fourth straight championship. Harris scored twice on the ground and tossed a touchdown pass, while Cannon led the Green Wave in rushing and converted two of the biggest plays of the game.

On fourth down on West Point's first drive, Cannon wound up with the ball on a reverse and pulled it down after looking to pass. He ran 17 yards to the 3-yard line, and it's not hard to guess who cleaned up on the next play for a 3-yard touchdown. (It was Harris, of course.)

That's typical for West Point, Cannon said: Either of the two is happy to reach pay dirt when the other is gassed or on the sidelines.

It was the case again early in the third quarter on what was perhaps the biggest drive of the game for West Point. To answer two straight Picayune scores at the end of the first half, Cannon caught a 19-yard flare from Corbin Kelley on third down, and after Jimothy Mays got West Point down to the 5, Harris ran it in for his second rushing score.

Though he's still battling a high ankle sprain, Harris showed out for the Green Wave, enough to receive his second straight Most Valuable Player award. To Cannon, there was no question: Harris would still be playing.

"I told him, push through," Cannon said. "This is our last game; we gotta eat."

The two backs did just that in their final contest, combining for 193 yards on 28 carries on the ground to end their West Point careers on top once again.

And just like the last three years, they did it together.