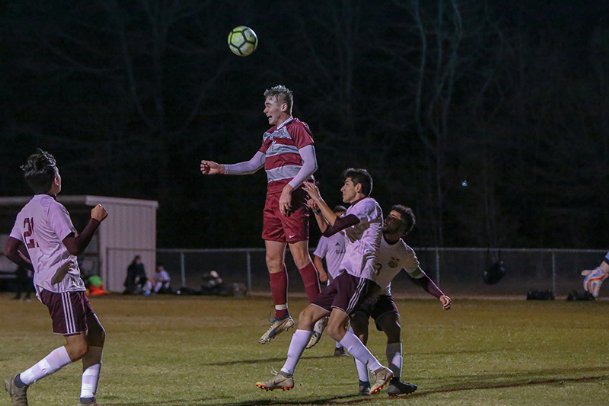 Garrett Bergstrom's junior season at Caledonia ended with a 2-0 loss to New Albany in the first round of the Class 4A playoffs Jan. 28. But Bergstrom and fellow senior Wes Rollins know the 'Feds can accomplish more this year. Photo by: Chris McDill/Dispatch file photo

New to the school, Blake knew the Confederates would take some adjusting to his style, including a new formation on the field. So he confided in Bergstrom and Rollins, longtime friends and Caledonia teammates, to help the 'Feds get up to speed.

Nine matches into their senior season, Bergstrom and Rollins have done exactly what Blake asked.

With Bergstrom in a striker role and Rollins stationed at attacking midfielder, the 'Feds shot out of the gate this year, winning eight straight matches before Monday's loss at Itawamba Agricultural. The two plan to win a championship ring in their final season, and so far, it doesn't seem out of the question.

"It's been a really good time," Bergstrom said. "Everything's really coming together, and we're really finding ourselves on the field."

He noted Blake's switch from a 3-5-2 formation, where Bergstrom played right forward, to the 'Feds' current 4-3-3, where he's front and center.

"It's a pretty big difference, but for the players that we have it was a good decision as a coach, and I think it was the best decision for us on the field," Bergstrom said.

"We really try to attack that, connect passes and finish it from the center of the field," Rollins said. "That's really all we can hope for."

So far, the strategy has proved immensely effective for Caledonia. The 'Feds beat district opponent Shannon 8-0, posted a 5-1 win at Amory and shut out district foe Mooreville twice.

But Monday in Fulton, with Rollins beginning a four-week disciplinary suspension, they couldn't notch an equalizer against Itawamba, which broke a 1-1 tie in the second half for a 2-1 victory.

"For me, watching that game from the sidelines, that killed me," Rollins said. "It was awful. The last 15, 10 minutes, we were pushing everybody up trying to get one in the back of the net. It just didn't work out.

"That's not gonna be the first time in the season that we're gonna face adversity, but for that being the first time that we had to, it was heartbreaking and frustrating."

But the loss offered Blake a unique perspective -- one that his emotional players couldn't immediately see.

"When you're winning and winning, you don't always see all the things you've gotta work on," he said. "As a coach you might see it, but you can't get the players to necessarily see it until you really lose a game."

Blake's got the chance to exert plenty of influence over a youthful Caledonia team. Bergstrom and Rollins are the entirety of the team's senior class, and the 'Feds have only two juniors: right back Jayden Henderson and backup goalkeeper Logan Powell.

In fact, two eighth graders -- Charlie Newman at right forward and Eli Wilson at left back -- even start for the 'Feds. The youth movement is just fine with Blake.

"It's exciting in a way because you get a chance to build something that's not necessarily been established," he said. "Obviously, the older ones, it's been established, but with the younger ones, you can kind of mold them and develop them into what you want them to be as soccer players from a tactical stance, a technical stance. The older ones are already pretty much who they are at that point."

It's all been working out for Blake in his first year at the helm in Caledonia, and Saturday, the 'Feds will have a chance to prove their worth against Class 5A opponent New Hope. The match is the only meeting of the year between the two rival schools, so it will be the last one for Caledonia's two seniors.

The 'Feds host Magnolia Heights on Thursday, and they could be 10-1 by Saturday night if both matches go their way. Not a bad start for a young team and a first-year coach.

"We've already improved so much from where we were at the beginning of the season," Blake said. "With our potential and everything, we've got so much more. We're just gonna keep working until we reach that."