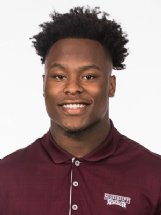 A Columbus native, Hill announced via Twitter Thursday afternoon that he will forgo his final year of eligibility to enter the NFL Draft.

"My time here has been an incredible experience, and will never forget where I came from," he wrote in a statement. "Mississippi State is a special place and has been since I first stepped foot on campus. I am truly blessed and will always hold my Bulldog close to my heart.

"Every time I talk to him we talk about this maturation period he's going through right now," MSU running backs coach Terry Richardson said of Hill during preseason camp. "He just had his 21st birthday, (leadership) is something we talk about. We practice it and preach it because not only are we teaching these guys football, we're teaching them to be better men -- and I think he's buying into that and you're seeing the results of that."

He is expected to play in the Music City Bowl Dec. 30 against Louisville.

1. 'We can win wherever we go': An inside look at Mississippi State women's basketball's assistant coaching culture COLLEGE SPORTS