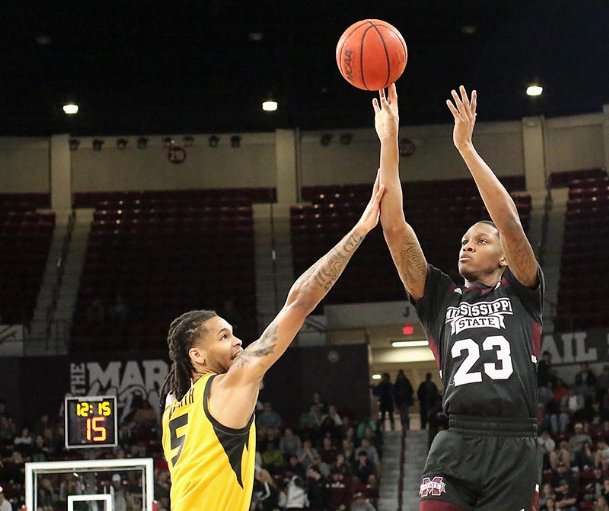 STARKVILLE -- Greg and Tyson Carter's one-on-one basketball matches have persisted throughout the years.

When exactly they ceased depends on whom you ask.

Tyson, Greg's son, spins the tale of the family scrimmages ending after his middle school days.

"He got sick of me whooping him," Tyson said in reference to his father, who has long served as his basketball mentor.

Meanwhile, Greg, who has coached the Starkville High boys basketball team since 2002, let out a hearty laugh when told of his son's boast. That's not how he remembers it.

The father-son showdowns didn't end until Tyson's junior year of high school, if the elder Carter is to be believed.

"All I remember is, the last time we played, I won," Greg said inside the Starkville High School basketball offices.

"Now, he always gets me in the gym without the right shoes on," Greg, who coached Tyson his sophomore through senior years of high school, continued through a chuckle.

This score won't be settled with a rematch in the future anytime soon. "Those days are over," Greg said.

But even if Tyson exaggerated how the last hardwood meeting went, it's the younger Carter that walks away with the last set of basketball bragging rights. On his 22nd birthday, no less.

Tuesday night against Missouri, the senior guard gave himself a nice birthday present by passing Greg on the all-time Mississippi State men's basketball scoring list after converting a midrange jump shot six minutes into the contest. He entered the matchup against the Tigers tied with his old man at 1,123 career points and now has totaled 1,138 collegiate points.

A moment he envisioned months ago finally arrived.

"It means a lot to me," Tyson said after his team's 72-45 victory over Missouri on Tuesday.

A vision that started four years ago

In the Carter household, Greg secretly had aspirations of his son passing his scoring mark from the moment he watched Tyson ink his national letter of intent to play with the Bulldogs.

"One of the thoughts that I had is thought he'd outscore me and my career," Greg said. "I'm just proud of the fact that he (got past) what I did."

While those close to the team have commented that Tyson exhibits a similar shooting stroke Greg used when he played at MSU from 1987 to 1991, the elder Carter acknowledges he was a different player than his son.

"It's similar technique and similar style. But he shoots it a lot better than I did," Greg said. "Shooting was more his focus; it wasn't mine. I knew when he got to high school he'd be a better shooter than me."

Greg, a 6-foot-6 forward, averaged 5.2 and 5.3 points per game his first two years before contributing 13 and 15.4 points per contest his junior and senior campaigns. He led the Bulldogs to an NCAA tournament appearance his senior year.

Tyson, a 6-foot-4 guard, has been a more consistent collegiate scorer than his father. He saw his scoring average go from 7.5 to 8.5 points per game from his freshman to sophomore year, then contributed 10.4 points per night en route to leading the Bulldogs to their first NCAA tournament appearance in 10 seasons in his junior season. Entering Tuesday night's game against Missouri, despite suffering a recent slump, Carter held a career-high 13.5 points per game mark.

The Carters are the only father-son duo to each score more than 1,000 points in SEC history.

"It means a lot that he's an important part of the team," Greg said. "What I did is almost ancient history now. But he was an important part of them making the NCAA tournament last year ... That's what I really wanted for him. They kind of struggled his first two years, but last year, that was really rewarding to see him enjoy that moment and see him enjoy what I went through."

When Tyson started his collegiate career, Greg almost felt a bit of relief. He didn't have to pull double duty of being Dad and Coach anymore. Now, he could just watch his son like any normal parent sitting in the bleachers.

"It was fun to watch him grow up and mature as a player and a person," Greg said. "It's been even better at MSU, because I get to see it from a different perspective."

A slump along the way

Some players will tell you they don't pay attention to individual statistics throughout the course of the season. Others will openly admit they keep track of their numbers. Tyson is somewhere in between.

The Starkville native knew he entered the year 203 points away from surpassing his father's scoring total back at SEC Media Days on Oct. 17. He even predicted he'd vault past that number by the end of MSU's nonconference schedule. It didn't exactly work out that way.

After the Bulldogs finished competing in the Myrtle Beach Invitational in late November, Tyson reached out to his dad and gave him a little grief about the quickly narrowing gap.

Then came the worst slump of his career.

Entering Tuesday's contest against Missouri, Carter had shot 13 of 59 from the field in his past six games. It was an unprecedented shooting clip for a guard who was considered the team's best shooter entering the season.

Those closest to him did the best they could to help him pull through it. MSU guard Nick Weatherspoon reached out to Tyson after he shot 1 of 11 against Auburn on Jan. 4 and encouraged him to shoot his way out of the slump.

MSU coach Ben Howland said on multiple occasions he trusted Carter to pull himself out of the rut.

Greg suggested the pressure of surpassing his scoring total might have caught up to him.

"I'm hoping he can go ahead and get it out of the way so he can just focus on basketball," Greg said. "Because I know he's looking forward to it. He knows every point.

"To be honest, I think he's had it in the forefront of his mind the last couple of games."

Tyson contradicted his father Tuesday by saying the record hadn't been in his mind because he's been too sick of losing.

Against Missouri, Carter was removed from the starting lineup for the first time all season. The move worked, as he was 6 of 12 from the field and scored 15 points off the bench. He hopes it was the beginning of the end of a six-game stretch he'd love to forget.

"It meant a lot, because I had been struggling," Tyson said of his success. "It's definitely a confidence boost."

"The basket is about to get really big for him again," Howland said.