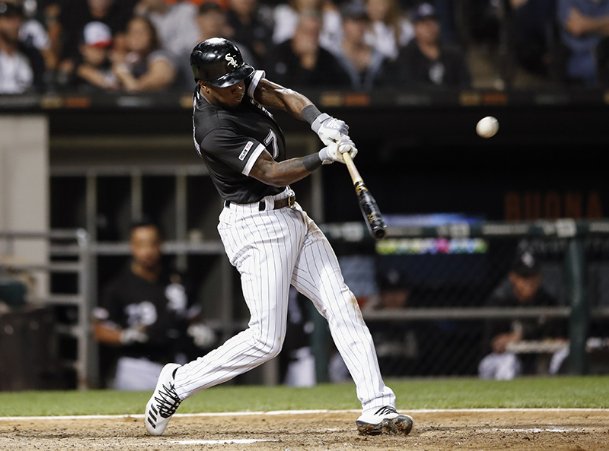 PHILADELPHIA -- Long before he was the starting shortstop for the Chicago White Sox, Tim Anderson was an unknown high school baseball prospect in Tuscaloosa, Alabama.

In his freshman year, Anderson batted .360 with four home runs and was a perfect 30 for 30 in stolen base attempts. As a sophomore, the 6-foot-1 infielder led all JUCO players with a .495 batting average and was selected by the White Sox with the 17th overall pick of the 2013 MLB Draft.

He made his MLB debut in 2016 and in 2019 won an MLB batting title after leading the majors with a .335 batting average.

On Thursday, Anderson ventured to Philadelphia to attend ECCC's baseball fundraiser "Around the Diamond." Anderson met with players from the ECCC roster and spoke to all attendees as part of the event.

The Commercial Dispatch talked with Anderson for a few minutes before the banquet about various topics, including his start in baseball, his bat flip antics, his advice to JUCO players, MLB's sign-stealing scandal and more.

The interview has been edited for length and clarity.

Q: You've had pretty humble beginnings. ECCC was your only college offer out of high school. How much does it mean to you that a JUCO player can turn into a future MLB batting champion?

A: It means a lot. Setting that standard and being that person to win the batting title coming from a junior college is definitely huge. I'm just enjoying the moment of it. It was a huge year and the start of something good.

Q: Getting to come back here and be a speaker at ECCC's baseball banquet, does that mean anything to you?

A: It's good, man, it really is. I like coming back here where it all started. I have fans down here as well, so I think it's good to be here and show my face. I'm just going to try and continue to build that fan base and really let them know I'm real. I didn't just go to school here. I came here and embraced it."

Q: After your first year at ECCC, you don't get drafted at all. Your second year, you explode on the scene and become the top JUCO prospect in America. Was going pro (early) a tough decision considering you had the University of Alabama at Birmingham trying to recruit you hard as well?

A: (Laughs). Well, it wasn't really that tough of a decision. I think it narrowed down to what (the White Sox and I) agreed upon. The number was good, so I took it.

Q: Was it ever truly frustrating when ECCC was your only offer when you maybe felt you were more talented than other players that were getting drafted before you or getting college scholarships?

A: Definitely. I still feel that. But I let that motivate me. I'll let it motivate me until I can prove people wrong. I've been proving people wrong since I left here, so I'll continue to do that.

Q: From a baseball perspective, how did you go from hitting .250 the year before to .335 a year later? What kind of mechanics are involved with that adjustment?

Q: Some other players in the league are known as the fun police. But you might be the ringleader of having fun, considering your bat flips and things of that nature. How important is it to you to be yourself and have fun out on the diamond?

A: It's more so within the team, we all like to have fun. And really, you only live once, and not many people get to make it to the big leagues. I'm going to enjoy every minute of it.

Q: On that note, it seems like Chicago has really embraced you. Most fans are waiting to see what bat flip Tim Anderson is going to come up with next after hitting a walk-off home run. How have you felt about the city?

A: It's home, man; it's home. The feedback has been good. They love me there, and I love being there. I moved there, I stay there year round, and my family is there. I'm excited to see what's next.

Q: I know how Chicago winters can be myself, so I just wanted to ask what it's like for a southerner like you to experience winter in Chicago.

A: It's tough, man. (Laughs). It's tough. But for me, I just go where I have to go. I don't go too many places, I go to work out indoors and I go back home. I can pull into my garage so I'm not really in the snow too much, so it's not too bad. But other than that, man, it's freezing. It really is.

Q: If you couldn't pick yourself, who do you think is the most fun player in baseball?

Q: All right, then who's the most fun guy on the White Sox besides you?

A: Well, it was Yolmer Sanchez. But he's not with us no more. So I'm sad about that, but man, he was the life of the party. He was my locker room buddy. It's definitely sad to see him go. But he'll be alright.

Q: Obviously there's a lot happening around MLB with the sign-stealing scandal. Do you have an opinion on the matter?

A: I don't. It is what it is. That's within them, I guess. I'm just going to stay within myself and control what I can control. That's hitting baseballs and having fun.

A: I think we're heading in the right direction. We've signed a couple more guys, and we're close. I really think we're close. I'm excited to get back to training with the guys because I think it's going to be a heck of a season.

Q: Have you had any contact with your new teammates, such as Dallas Keuchel or Yasmani Grandal?

A: Grandal and I have been texting back and forth. I had a chance to talk to Keuchel, but I'll see them at SoxFest next weekend. It'll be a good time to connect and meet the new guys and bond before you head out to spring training.

Q: What advice would you give to a prep hitter that may be struggling with the fact they're not getting the offers they want or are getting noticed?

A: Just believe in yourself. You're going to be your biggest teacher. You have to take pieces of things you learn from coaches and put it together along the way, but for you to actually figure it out, you have to go in there and do it yourself and see what results you get. It's easy for someone to tell you how to hit a baseball, but you really have to go in there yourself and put the work in so you can get those results. It can take the frustration out because you'll know what you're doing at that point.