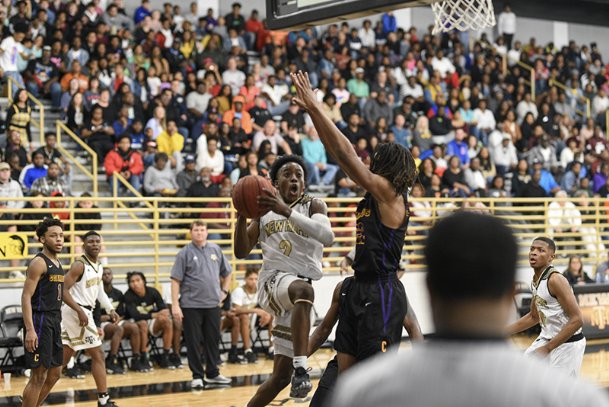 New Hope guard RL Mattix drives baseline and looks for a teammate late in Fridayâs game against Columbus. Photo by: Austin Frayser/Special to The Dispatch

NEW HOPE -- AJ Brownlee raised both arms to the sky.

The New Hope senior put three fingers up on each hand and yelled in exultation, and the louder half of a packed gym celebrated along with him.

Brownlee had just drained a 3-pointer early in the fourth quarter of Friday's home game against Columbus to push New Hope's lead to double digits. The shot capped what New Hope coach Drew McBrayer called a "mini-run" that was basically all Brownlee, who scored the final five points of the third quarter and the first four of the fourth quarter for the Trojans.

When that fateful 3 from the top of the key went in, capping Brownlee's outburst, it put New Hope ahead 46-35. That was all the cushion the Trojans needed to seal a 65-55 win against the Falcons, and Brownlee's teammates knew it.

"They were pumping me up," Brownlee said. "They were gonna jump on the court and get us a technical and everything."

The win moved New Hope to 17-1 on the season, a phenomenal start for a team that hovered around .500 last season.

"It feels great," Brownlee said. "Great. I can go to sleep good now."

Although not among the Trojans' starting five, the senior poured in 13 points for New Hope when the Trojans needed them. All nine of his points in the second half comprised the run that gave New Hope the separation it needed.

"It's great to have a kid like that come off the bench and be able to shoot the basketball the way he does," McBrayer said. "He came out with a lot of energy and got us moving, and we made a couple shots."

Outside of junior Blake Burnett, who had 31 points to lead his team, Columbus struggled from the field. Senior Gabe Williams had 12 points, but normally reliable scorer Eric Caldwell had just two, a pair of free throws in the first quarter. Tre Dismuke and JJ Williams were held scoreless Friday.

"The guys that we're used to scoring, those guys have to step up," Columbus coach Phillip Morris said. "They don't have to have a 20-point game or anything like that, but they've gotta step up."

The Falcons showed promise in the first quarter, shooting well and defending well to grab a 15-9 lead after one period of play.

Then the Trojans did what they have done all season.

Senior Jaylen Smith stole the ball from Williams and laid it in for an 18-17 New Hope lead, and a 3 from sophomore big man Caleb Parr, who led the team with 17 points Friday, stretched the advantage to 21-17. New Hope went on to take a 27-24 lead into the half.

"We started off a little slow, and then we turned it on a little bit," McBrayer said. "At times, we didn't shoot the ball well tonight like we normally do, but we made enough to pull away."

In the third quarter, the teams battled back and forth, with Burnett scoring eight points in a row to get Columbus back to a one-point deficit. Then RL Mattix and DJ Hughes made layups, and Brownlee hit a 3 and followed it with a jumper from the foul line.

Brownlee started off the fourth by making one of two technical free throws when Columbus inadvertently started the period with six players on the court, and then he hit the 3 that brought down the packed house.

Columbus fought back -- Burnett had 14 points in the fourth quarter alone -- but never got closer than six points. Smith, freshman LJ Hackman and Parr all made both free throws when intentionally fouled in the final 30 seconds, preventing a Columbus comeback.

The Trojans did, and by doing so, they sealed a big home win against their rivals and district opponents. It's a victory New Hope isn't going to forget anytime soon.

"They've been talking down to New Hope for a long time," Brownlee said. "I'm just glad we got the chance to prove them wrong."

At the end of the first quarter Friday, New Hope senior Imoni Harris connected on a 30-foot 3-point heave to beat the buzzer.

But the Trojans' home crowd, for the most part, stayed silent.

Harris' shot cut the Columbus girls' lead from 21-1 to 21-4 at the end of one period, and by that point, the Falcons had all but silenced the Trojans' rooting section -- just what Columbus coach Yvonne Hairston hoped for.

"That's what you don't want to happen," she said as the New Hope crowd roared in celebration of a bucket in the boys contest that followed.

On Friday, Columbus kept the rancor to a minimum, coming out and flattening the Trojans 62-17 to improve to 14-3 on the season.

"We wanted to keep their sixth man out of the game, which is their crowd," Hairston said. "I knew that we had to come out and play really, really tough early and then kind of get settled in, because I knew if they came out and they played well early, then the crowd was gonna get involved. We were gonna try everything we could to keep from getting the crowd involved."

Columbus did that by jumping passing lanes all night, making solid passes and scoring on a fast break or in transition.

"We've just been pressing the ball," Hairston said. "We're really quick, really aggressive. That's just what we like to do."

"Down the stretch, she was just getting her hands on the ball, which was a good thing," Hairston said.

"It gives us a lot of confidence, but we can't get too comfortable," the senior said of the Falcons' standout first period. "We've gotta keep playing hard the same way we came out."

New Hope, meanwhile, never scored more than six points in one quarter, as the Columbus defense stayed focused throughout and achieved what it came in to do.

"We had a lot of goals: to come out here and relax, don't get overworked, don't let the calls get us, to limit our turnovers and just play the whole game," Saddler said.

Consider those objectives reached Friday for the Falcons, who know it may not come so easy when New Hope visits Jan. 31.

"We're just happy to get a win," Hairston said. "I know when they come to us, it's going to be a little bit different."