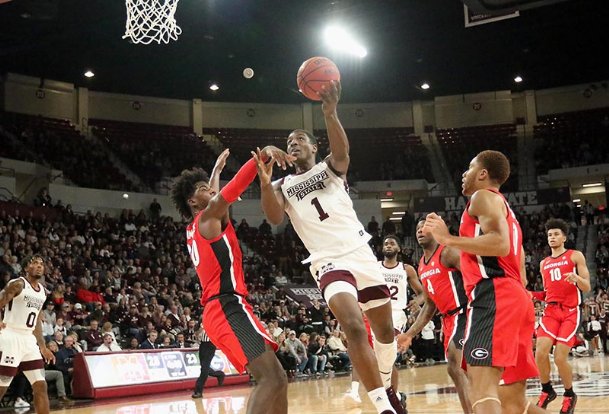 Mississippi State's Reggie Perry (1) drives to the basket and around Georgia's Rayshaun Hammonds (20) during the first half of their NCAA college basketball game Saturday in Starkville. Photo by: Jim Lytle/Special to The Dispatch

Yet it's Edwards that's considered by NBA scouts to be the superior talent. And for most of the season, the 6-foot-5 guard has lived up to his billing.

Edwards, projected by many to be as high as the No. 1 overall pick in the NBA Draft this summer, came into Saturday's contest averaging 19.1 points and five rebounds per night while shooting 41 percent from the floor in 16 games.

But it's Perry who will walk away from Humphrey Coliseum with bragging rights. First, the 6-foot-10 forward's maroon Bulldogs pulverized their red namesake, 91-59. And from an individual standpoint, the sophomore outplayed the freshman phenom, scoring 22 points on a 9-of-13 shooting effort. He also earned his 10th double-double of the season by grabbing 12 rebounds.

"(My success is) about my teammates finding me and believing in me to finish plays off," Perry said.

Edwards, meanwhile, contributed 19 points and finished 5 of 16 from the field.

"They were in front of him," Georgia coach Tom Crean said. "When Anthony starts to settle, he's average. He's a tremendous talent, but they did what everybody else does, they got a guy in front of him."

The win marks MSU's second straight blowout victory after earning a 72-45 victory over Missouri on Tuesday. MSU coach Ben Howland's squad played a complete game on both ends, shooting 61 percent from the field and holding Georgia to 39 percent shooting, while outrebounding Georgia 40-22.

"I'm really excited about how well we played," Howland said. "That's back-to-back phenomenal games. Our defense was great to start the game, and Reggie Perry was unbelievable tonight. ... You can see how together our guys are right now."

For the second straight night, MSU came out firing on all cylinders, racing out to a 10-2 lead. Unlike the victory against the Tigers, the maroon Bulldogs didn't lead wire to wire but still took a 42-31 lead into halftime after point guard Nick Weatherspoon ended the period with a mid-range shot at the buzzer.

MSU's offensive success continued into the second period, in part due to Tyson Carter's scoring effort from off the bench for the second consecutive game. Carter nailed a wide-open 3-pointer with 11:46 remaining in the contest and pushed MSU's lead to 58-40. The Starkville native finished with 18 points.

"We still feel like we haven't played our best basketball yet," Weatherspoon said.

MSU is back in action against Arkansas at 6 p.m. Wednesday at Humphrey Coliseum.

On Friday, the Southeastern Conference fined Howland $25,000 for comments related to private communications he had with the conference regarding officiating. Howland made the comments in a press conference Monday when answering a question about Perry's body language against LSU on Jan. 11. "(Reggie) had a play where he was holding the ball one-handed, and the guy just absolutely whacks his arm, and there's a no call. ... It was a horrible no call, right in front of the official," Howland said Monday. Howland added he spoke with SEC coordinator of men's basketball officials Mark Whitehead about "a number of calls" and that Whitehead acknowledged a foul should have been called on the play in question with Perry ... MSU head football coach Mike Leach was introduced to Humphrey Coliseum on Saturday night right before halftime. Leach made a few pirate puns, which were more effective than his T-shirt toss, which failed to make it over the second row on his second attempt. Nevertheless, Leach dropped a few of the one-liners that made him famous at Washington State. "It's like Pirates of the Caribbean, only with Bulldogs," the new MSU coach quipped.