'We can win wherever we go': An inside look at Mississippi State women's basketball's assistant coaching culture 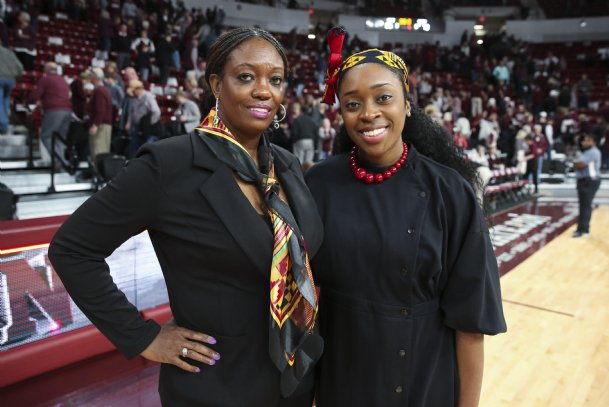 Johnnie Harris (left) and Dionnah Jackson-Durrett have formed close relationships with Schaefer and their fellow assistants at Mississippi State. Photo by: Courtesy of MSU Athletics

STARKVILLE -- Vic Schaefer arose from his seat and moved about the airplane cabin.

Making his way through the aisle, he reached Johnnie Harris' seat and slipped her a note.

Harris unfurled the paper. Schaefer had scribbled a message into the center: "Can we win at Mississippi State?"

Flipping over the piece of paper, Harris wrote: "We can win wherever we go."

Both assistant coaches on Gary Blair's Texas A&M staff at the time, Harris and Schaefer were headed back to College Station fresh off a Sweet 16 win over Georgia and en route to the 2011 national title.

And while the on-court successes offer a substantive look at MSU's prolonged stability, it's the developmental atmosphere Schaefer harbors amongst his assistant coaches that speaks equally as much to the program's overall success.

"I love coming to work," Jackson-Durrett told The Dispatch. "You go down the floor, and you're challenged as a coach, and that's how you grow as a coach. And you love to do it with them."

'Nobody is beneath doing anything'

Each morning starts the same way.

Harris, Jackson-Durrett, Lovato and the rest of the MSU coaching staff arrive at Humphrey Coliseum around 8:30 a.m. A staff meeting with Schaefer starts around 9 a.m.

Checking in with each of his staffers, Schaefer runs through the day's routine and other clerical work before the day gets going.

Following the morning meeting, coaches retire to their offices to make calls, fill out paperwork, and carry out other varying responsibilities.

"We work really well together," Harris told The Dispatch. "Nobody is beneath doing anything."

Harris' office is the closest to Schaefer's, a nod to her longevity and longstanding relationship with the eighth-year head coach. After stints at Arkansas and North Carolina State, she worked alongside Schaefer for five years at Texas A&M before joining him in Starkville in 2012 when he took the MSU job.

Known as an ace recruiter during her time in Fayetteville and Raleigh, Harris originally headed to College Station in hopes of bolstering the Aggies' talent pool.

One day, she was seated alongside Blair at a high school All-American game during her tenure at Texas A&M when the 35-year head coaching veteran exclaimed, "I'm tired of coming here and watching these kids -- I want some of them!"

Harris obliged, helping the Aggies reel in classes ranked No. 2, 3 5 and 6 nationally while during her time in College Station.

But now in the midst of her eighth season at MSU, Harris is far more than a recruiter. Working with the Bulldogs' post players, she proved instrumental in the development of former standouts Teaira McCowan -- the No. 3 overall pick in the 2019 WNBA draft -- Anriel Howard, Chinwe Okorie and Martha Alwal while also working as a mentor to the younger assistant coaches.

"(Vic) gave me a lot of responsibilities, but he helped me grow into that role at the same time, and not a lot of people would have had the chance to do that," Harris said.

Though Harris serves as the elder statesman of the bunch, Jackson-Durrett and Lovato bring ample continuity to Schaefer's staff. A four-year standout at Oklahoma, Jackson-Durrett is in her fifth year at MSU after assistant coaching stops at George Mason and Southeast Missouri State, while Lovato is in her second stint at MSU since 2014 following a two-year run as the head coach at Division II Arkansas-Fort Smith.

Like Harris, Schaefer has challenged the younger contingent of his assistant coaching staff.

During the summer of 2017, he approached Jackson-Durrett in hopes of affording her more responsibility. After a brief conversation, the pair decided she would take on scheduling duties -- a task Harris had previously overseen.

Working through the months-long process of rounding out MSU's 2019 slate, Jackson-Durrett called a coach midway through last season while the Bulldogs sat undefeated and among the nation's elite.

"We lost to Missouri -- and I think that was our first loss -- and I was like 'Let me get on the phone; I'm working on scheduling today," she added through a laugh.

And while the experience proved taxing, Jackson-Durrett -- who was named an associate head coach alongside Harris ahead of this season -- felt grateful for the opportunity to take on the challenge.

"It's tough, but you have people out there that will play you," she said. "And we just want to be prepared to make sure our players are playing in April."

While the work is demanding, there's a friendly, familial atmosphere to the MSU women's basketball offices.

Schaefer's daughter, Blair -- a former standout at MSU in her own right -- is in her first season as the coordinator of women's basketball player development.

Down the line, Harris' grandchildren Samarah, 13, and Kaiden, 6, can constantly be seen running the halls of The Hump.

So too can Jackson-Durrett's daughter Laila -- who welcomed a number of MSU staffers and players to her second birthday party earlier this week and takes in games from the fourth row behind the bench in a booster seat.

"This is her second family," Jackson-Durrett said of Laila. "Coach Harris brings her grandson and granddaughter up here, and coach Schaefer's daughter works with us, and Lovato is our family too. No beat is missed."

Beyond the children, Schaefer's players add to the friendly confines that sit one floor above the practice floor at Mize Pavilion.

"I was waiting for you!" Carter exclaimed.

"I know, I know -- I saw you," Harris responded playfully as Carter moved in for a melodramatic embrace of her position coach.

Releasing her coach, Carter and Harris walked in tandem down to the main court at Humphrey Coliseum to get up extra shots.

"I just think it's a special group," Harris said. "And I think coach Schaefer sets the tone for that. We just kind of feed off of him, and I think it's important for our kids to see that that they feed off us. That's why we have good chemistry with our play here."

'They're so much more than just the strategy'

The 2020 season has been one of trials and tribulations for the MSU coaching staff.

Schaefer has quipped the anxiety his youthful team -- one that is replacing three senior starters and boasts six newcomers -- might kill him.

The assistant coaching staff has had their own battles, too. For Harris, bringing Carter along in hopes of replacing the 18.4 points and 13.5 rebounds McCowan provided nightly is a challenge in itself -- though she's responded productively, averaging 13 points and 10 rebounds per game.

Jackson-Durrett has been tasked with maturing redshirt sophomore Myah Taylor, who played just 11.2 minutes per night before taking over full-time point guard duties this season.

Despite the growing pains this year's squad has experienced, the job Schaefer and his staff have done in guiding the Bulldogs to a 16-2 record ahead of Monday's contest with No. 1 South Carolina has begun to garner recognition.

Harris, who was previously named the 2018 Women's Basketball Coaches Association assistant coach of the year, is being honored next month at the Northside Christian Church's African-American History Banquet as a difference-maker in her community.

Jackson-Durrett was also recently named to the 2019 Delux Power 100, which recognizes the top 100 professionals and influential leaders from St. Louis.

That said, Schaefer knows his staff won't stay the same forever. He conceded earlier this week he must fight off other programs looking to poach his assistants seemingly every offseason. But whether the makeup of his assistant coaching staff stands to change in the near future or not, when Schaefer's "A-Team," as he refers to them, are selected for head coaching roles, they'll be ready based on the culture of development they've endured in Starkville.