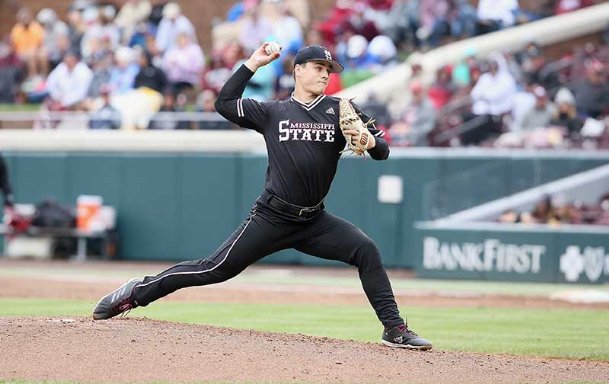 Sophomore JT Ginn will be a constant of the Bulldogs' pitching staff, but behind him, much is unknown. Photo by: Jim Lytle/Dispatch file photo

STARKVILLE -- With fans clambering through the wells of the Left Field Lounge at Dudy Noble Field on Saturday to set up their rigs for the upcoming season, Mississippi State baseball hosted its annual media day as reporters met with coach Chris Lemonis and the 2020 squad.

Fresh off back-to-back trips to the College World Series, the Bulldogs enter the season ranked No. 9 in Baseball America's preseason rankings -- one of seven Southeastern Conference teams slotted in the initial top 25 poll.

"We have so many new guys; we have 22 new guys in the program, so trying to figure out our arms is huge," Lemonis said. "Hopefully, we settle into some guys."

While the offense should remain a staple in 2020, Lemonis' pitching staff is one filled with unknowns.

Sophomore right-hander JT Ginn is a likely All-American pick after he was named the National Freshman of the Year by Perfect Game in 2019, finishing the season 8-4 with a 3.13 ERA, 105 strikeouts and a .220 batting average against.

Behind Ginn, redshirt freshman Christian MacLeod and sophomore Eric Cerantola offer plenty of upside but neither has been a model of consistency to date. Lemonis said Saturday that MacLeod would have been MSU's likely No. 2 starter a season ago but that an undisclosed illness forced him to redshirt.

As for Cerantola, the 6-foot-5-inch, 220-pound righty can touch as high as 98 miles per hour with his fastball, but control issues saw him struggle to an 4.30 ERA in 14.2 innings pitched -- including two wild pitches and five hit batsmen -- a year ago.

"(Eric) had a really good spring training," Lemonis said. "If he figures it out, he's a first-rounder type of guy. (In the) SEC tournament, he was 96-98. Now in a starting role, he's not throwing that hard. He has a chance."

While the starting rotation behind Ginn remains unproven, MSU's bullpen is perhaps even more so.

With Gordon and Leibelt anchoring the closer and setup man roles down the stretch in 2019, the Bulldogs lack a tenured and reliable arm at present. Senior Riley Self has been potent in spurts, but injuries to his left wrist, among others, made his production limited. Senior Spencer Price has also been with the program for three years and could make a veteran impact.

Graduate transfers David Dunlavey (Furman) and Carlisle Koestler (Southeastern Louisiana) both present possible options both at the tail of the starting rotation and out of the bullpen as well -- though neither has faced the consistent talent SEC hitters pose week to week.

"It feels like he's 30 years old even though I think he's only 24," Lemonis quipped of Koestler. "He's been through a lot of college baseball. He was the closer at Hinds Community College. He was the Friday night guy at Southeastern Louisiana. He's done it, been there, has good stuff and has a maturity."

With ample options both in the bullpen and in the starting lineup, Lemonis said Saturday he anticipates using the three weeks ahead of the Feb. 14 season opener against Wright State and the early part of the season to round out his rotation.

"I think lining up our pitching staff, getting everyone their innings right now, keeping everybody healthy going into that opening weekend is a big piece for us," he said. "We're not used to too much cold weather, so getting through this time of year and getting guys their innings, for me, is the biggest piece. The more innings we get, the more at-bats we get, our guys will be ready."