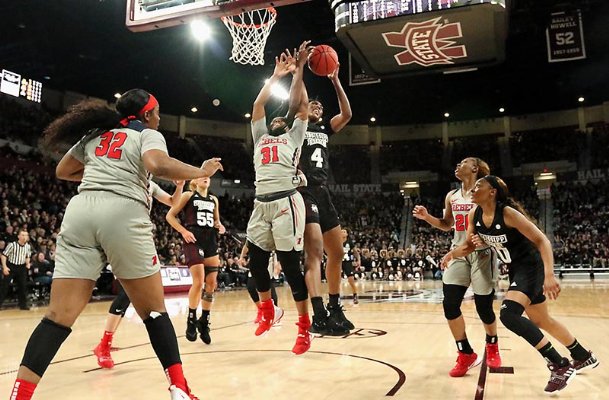 Mississippi State's Jessika Carter fights for a rebound with Ole Miss' Deja Cage during the first half Sunday in Starkville. Photo by: Jim Lytle/Special to The Dispatch

STARKVILLE -- As the basketball community mourned the death of NBA legend Kobe Bryant, who died in a helicopter crash with his 13 year-old daughter Gianna and several others Sunday morning, a gaggle of Mississippi State students gathered in the front row of the student section at Humphrey Coliseum.

Back in the MSU locker room, coach Vic Schaefer addressed his squad in the wake of the tragedy.

"All I have is the words I told my team before we hit the floor," Schaefer recounted postgame. "'Embrace the day, embrace the moment. Don't take anything for granted.'"

"It's heartbreaking -- It's a tragedy," MSU senior guard Jordan Danberry said. "We give our prayers and condolences to Kobe Bryant's family. We all were watching the news and listening to it right before the game, so it definitely impacted us a lot to hear that news of a legend and his daughter."

With Bryant's loss looming large in Starkville and beyond, the Bulldogs enjoyed a dynamic offensive display reminiscent of the departed guard as they downed the Rebels by double digits for the seventh straight meeting.

Sophomore center Jessika Carter enjoyed a return to form after being limited to two points and one rebound against No. 1 South Carolina on Monday, notching 24 points and 11 rebounds for her sixth double-double of the year.

Junior forward Chloe Bibby and sophomore guard Xaria Wiggins were similarly productive, combining for 16 points on 5-of-7 shooting in the first half as the Bulldogs headed into the break with a 47-14 lead.

For Wiggins, Sunday marked the second straight contest in which she's received an uptick from her 13.6 average minutes per game. Replacing freshman Rickea Jackson in the starting lineup, the Virginia Beach, Virginia, native notched the game's first bucket with a rattled 3-pointer off the wing before earning a pair of trips to the free throw line as she continually beat her defenders off the bounce.

"I definitely think I'm playing pretty well right now just getting the confidence from being on the court," she said. "Just my teammates sitting here and supporting me and pushing me every day definitely helps too."

Using 11 of its 12 available players, MSU stretched its lead as high as 45 over the game's final 20 minutes. After not entering the game until midway through the second quarter, Jackson scored 10 of her 12 points in the second half.

While Sunday's victory gives MSU wins in 13 of 15 games against Ole Miss since Schaefer arrived in Starkville in 2012 -- including 12 straight -- the mood was somber in the postgame media room beneath Humphrey Coliseum moments after the final horn.

Speaking with reporters, Ole Miss coach Yolett McPhee-McCuin sat with her toddler daughter, Yuri, to her right as she addressed the news of Bryant's passing.

"I wanted to be Kobe -- everybody wanted to be Kobe," she said. "It's surreal, and that's why I allowed one of my daughters to come in and experience this, because time is precious, and we sit around and take for granted moments where we could be around our family. That was just a wake-up call to hug on your loved ones and keep things in perspective."