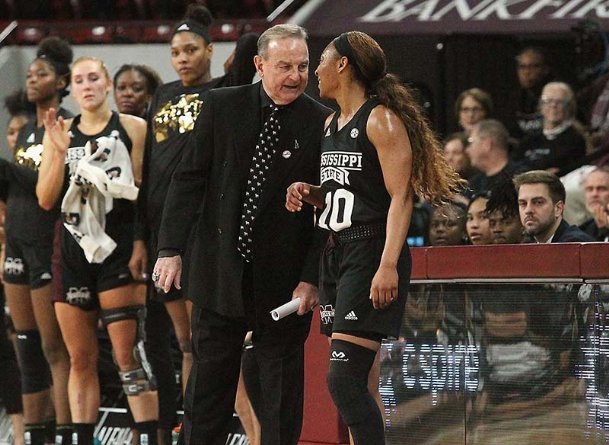 Sitting at the podium in the underbelly of Humphrey Coliseum, Schaefer was asked whether Sunday's 80-39 shellacking of in-state rival Ole Miss and games against No. 1 South Carolina and Vanderbilt had helped him sure up what has been a revolving door of a rotation this season.

"It's hard," Schaefer said through a grimace. "I feel like I'm pretty comfortable with Xaria (Wiggins) being our first 3 or 4 coming off the bench, but up to game time today we'd have had a lineup you'd have gone, 'Now what?'"

While the Bulldogs have seemingly turned a corner in recent weeks -- most notably last week's 81-79 near-miss against the Gamecocks -- the pieces of a coherent rotation that MSU could boast into the heart of conference play has also come into focus.

For starters, the emergence of backup guards Aliyah Matharu and JaMya Mingo-Young are impossible to ignore.

Through 21 games, Matharu has been a fluctuating mix of dynamic scoring ability and a first-year player who looks lost defensively. That's begun to change. Over the past three games Matharu has totaled a plus-minus rating of plus-22 while recording seven steals -- four of which came against Vanderbilt -- in that same span.

With her defense now finding its footing, the former five-star recruit has seen her offensive game flourish. Matharu notched double-digit scoring outputs in each of her past three games, and her 10-point burst in just under three minutes against South Carolina kept MSU within striking distance heading into the fourth quarter in Columbia.

"I think you've seen Aliyah improve lately," Schaefer said last week. "I think that's a mark of what we've done here at Mississippi State -- we develop players ... We don't apologize for being demanding. She's learning the importance of defending; now she's learning to try and take care of the ball."

"Once I get my defense going, the offense is just another part of my game," Matharu added.

Mingo-Young has been similarly productive over the past week, as she's carved out a firm hold on the backup point guard duties behind sophomore Myah Taylor -- though whether she'll stay a No. 2 remains to be seen.

A gritty defender and physical driver off the bounce, the Bogalusa, Louisiana, native has played 48 minutes over the past three games, bumping her average number to 13.3 minutes per night.

And while Mingo-Young was held scoreless against Vanderbilt and Ole Miss, she still finished with a combined plus-minus of plus-5.

In addition to Schaefer's bouncy freshmen, Wiggins has been a welcome surprise to the lineup over the past two weeks as well. Since notching a season-high 13 points at Georgia on Jan. 5, Wiggins is averaging 7.4 points per game, compared to her season average of 4.6.

And though Wiggins' offense has been an added bonus, it's her defense that has given Schaefer added flexibility in his rotation. At 6-foot-1, Wiggins can guard anywhere from point guards to power forwards -- a trait Schaefer lauded following Sunday's win over the Rebels.

"She wasn't playing that great earlier in the year," he said. "But she put in the time and has been doing some good things in practice, and then she's been given some opportunities during ballgames, and she's come through."

"I definitely think I'm playing pretty well right now just getting the confidence from being on the court," she added. "Just my teammates sitting here and supporting me and pushing me every day definitely helps too."

Sitting at 6-1 in SEC play entering Thursday's contest against Auburn, MSU is nearing a brutal February stretch that includes games against No. 13 Kentucky, No. 15 Texas A&M and No. 22 Tennessee.

And while Schaefer continues to manage a roster that can go as deep as 12 players, the eighth-year head coach is finding a semblance of positivity in his ongoing battle with finding the correct formula night to night.

"I kind of like it," he said. "I like the kids competing in practice knowing that nothing is set in stone, and you want to encourage those young kids that maybe aren't playing as much as they thought they might or should or did in the summer -- you want to encourage them, don't slot yourself in a position where you think, 'This is where I am, and this is where I'm going to stay.' You've got to keep working."