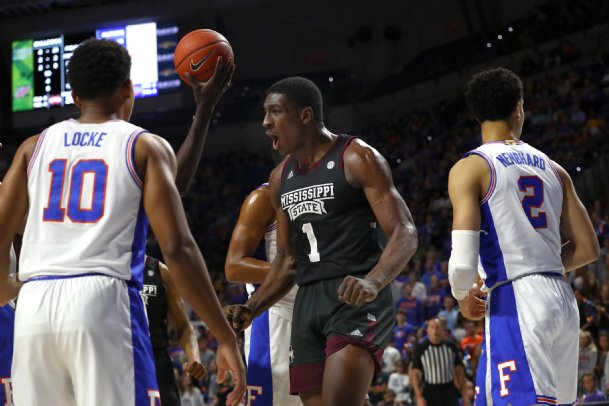 Mississippi State Bulldogs forward Reggie Perry (1) reacts as he makes a basket while getting fouled against the Florida Gators during the first half at the Stephen C. O'Connell Center. Photo by: Kim Klement/USA Today Sports

Trailing by as many as 16 points in the first half, the Mississippi State men's basketball team clawed its way back and picked up what could be considered its biggest win of the season Tuesday night.

Behind a career-high 27 points from sophomore forward Reggie Perry, the Bulldogs stunned Florida with a 78-71 victory at Stephen C. O'Connell Center. The upset comes one game after just missing picking up a quadrant one victory after failing to convert a bucket at the buzzer against Oklahoma in the Big 12/SEC Challenge. Instead, MSU earned its second quadrant one victory of the season after holding to Florida to 0-of-7 from beyond the arc after the Gators shot 8-of-14 from 3-point range in the first half. The Bulldogs' other quadrant one victory was its home victory against Arkansas on Jan. 22.

Entering the game, Mississippi State was No. 48 in the NET rankings nationally. Earlier this week in a press conference, Howland said he wanted the team to be in the thirties. The Bulldogs' victory should help them get close to that mark in the coming days.

"It shows a lot of character that after losing two one-point games on the road, our guys fought back to get the win against a very good team," Howland said.

A MSU win was hard to picture from the opening tip after Florida opened the contest on a 25-11 run, then extended the advantage to 36-20 after converting 7 of its first 11 3-pointers to start the night.

"I just wanted them to keep fighting and staying the course," Howland said.

At halftime, MSU trailed Florida 45-35. Perry kept the Bulldogs in it with 17 first-half points, a polar opposite after being held scoreless in the first half Saturday against the Sooners, but Florida shot 58 percent from the floor entering the break.

"It means a lot," MSU forward Robert Woodard II said of the win. "It says a lot about our team how everybody was willing to buy in and take criticism at halftime to know what we can do better. We know we can work together and win close ball games as well even when we have adversity."

The Bulldogs responded with a 17-7 run to open the second half to even the game at 11:15, then took their first lead since the game's opening 30 seconds when senior guard Tyson Carter nailed a 3-pointer at the 8:50 mark.

"We played a lot better defensively in the second half," Howland said. "We pressured the ball, and I thought that was a huge factor."

The Bulldogs extended their lead, and delivered the dagger to Florida after Woodard II sank a long range shot from the left wing to give the Bulldogs a 73-66 lead with 2:20 remaining.

Clutch free throw shooting allowed MSU to hold the lead, as it went 15-of-17 from the charity stripe. One of the lone free throw misses was on the front end of a one-and-one, but Woodard II grabbed an offensive rebound with 33 seconds left and the Bulldogs leading by five.

"That rebound was important considering how close the game was at that time," Woodard II said. "I wanted to be in a position to get the rebound. I just so happened to grab it."

Perry scored his 27 points on a 9 of 14 shooting performance, while also grabbing eight rebounds and committing 7 turnovers. Woodard II contributed 16 points (6 of 7 shooting) and Carter scored 12 points off the bench.

"(Reggie) kept us alive in the first half," Howland said. "He really did a hell of a job for us and gave us a chance in the second half."

Junior point guard Nick Weatherspoon continued his efficient passing with eight assists and only one turnover, while also chipping in 13 points.

"I just took what they gave me," Weatherspoon said of his passing. "I saw a lot of options and hit the open guy."

The Bulldogs shot 53 percent from the floor in the contest and held Florida to 45 percent (29 percent in the second half).

MSU is back in action against Tennessee at 1 p.m. Saturday at Humphrey Coliseum.