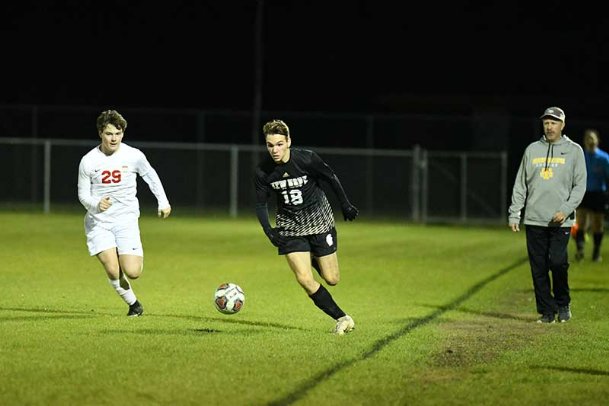 New Hope forward Trey Parnell (18) races down the sideline away from a Lafayette defender early in Tuesday's playoff game in New Hope. Photo by: Austin Frayser/Special to The Dispatch

Parnell pulled down a pass in the box for the winning goal late in the first five-minute sudden-death period, extending his fellow forward's career at least one more match and giving his home crowd something to cheer for.

"I love these guys, especially this guy right here -- this is like my best friend," Parnell said of Wilson. "I didn't want to see him leave, so I had to dig deep and put it in the back of the net."

As soon as he did, Parnell charged toward the New Hope bench, chased by his teammates. He went into a slide in the mud near the sideline, got up and turned around as senior Cole Ruffin was the first Trojan to reach him, banging on Parnell's chest to hype him up.

"He works hard all year long, and in those type of moments, he just finds some type of way to come through for us," New Hope coach Andrew Olsen said of Parnell. "He worked all game, and we just knew it was gonna come ... I'm proud of him. He never stopped. He never quit."

Parnell's winner came after a 30-minute delay when two different stadium light towers fizzled out before the match, after Lafayette erased a 2-0 deficit with a pair of goals in as many minutes and after two 10-minute overtime periods failed to produce any scoring.

Wilson scored in the 19th minute after the Lafayette goalkeeper dived for the ball and couldn't come up with it, and Ellis Clark converted a penalty kick in the 38th minute, giving New Hope a 2-0 halftime lead. But the Trojans couldn't hold it, conceding twice in rapid succession and sending the game into extra time.

It was a long night for New Hope, but as soon as Parnell scored to clinch the win, Olsen reminded his players: "It ain't over."

"We had a mission from Day 1," Olsen said. "We want to make it to the state championship. Every game, our motto is we're 0-0. I know this is an exciting win for us, but we've gotta go back to work tomorrow. ... We've just gotta continue going, keep working."

Continuing to push forward eventually paid off for New Hope after the shocking turn of events in the middle of the second half.

Lafayette's Osvaldo Arelleno put home a goal in the 56th minute to make it a 2-1 game, and less than two minutes later, a crowd of Commodores swarmed the net and punched in the tying goal.

Last season, the Trojans experienced a similar twist of fate against Pontotoc in a tough first-round loss.

"They tied it up, and we just shut down, because we didn't know how to react to that," Parnell said.

Not Tuesday. New Hope repeatedly turned away Lafayette's late chances, kept the Commodores scoreless in overtime and eventually put one in the back of the net. Wilson said Tuesday's win brought the Trojans closer together, and his friend and teammate agreed.

"It just shows that we're a team still," Parnell said.

Three hours after its 6 p.m. scheduled kickoff Tuesday, that team is moving on to the second round.

On Saturday, the Trojans will host Ridgeland, which shut out Jim Hill 6-0 in its first-round match.

New Hope and its seniors know the road ahead isn't easy, but the Trojans are happy to have at least one more match in a season that came perilously close to another early end.

"That could have been our last game," Wilson said.