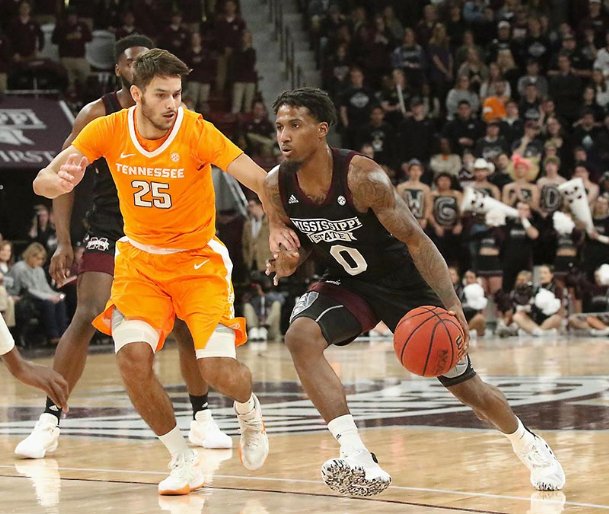 Mississippi State's Nick Weatherspoon (0) drives the lane and around Tennessee's Santiago Vescovi (25) during the first half of their NCAA college basketball game Saturday, Feb. 1, 2020 in Starkville. Photo by: Jim Lytle/Dispatch file photo

STARKVILLE -- It's incredibly unlikely that Tuesday's men's basketball matchup between Mississippi State and Ole Miss will be the chaos-inducing, drama-filled spectacle its Egg Bowl counterpart was in November.

Nevertheless, the Bulldogs (15-8, 6-4 SEC) are feeling the pressure that comes with the rivalry as they prepare for the first of two matchups with the Rebels (12-11, 3-7) this season, starting at 6 p.m. at the Pavilion in Oxford.

"I think you feel it more in basketball," MSU coach Ben Howland said Monday. "It's just more enclosed and there's way more intensity in a closed building when everyone's right on top of you. I think it's great in football, no question, but in terms of the intimacy of basketball, there's nothing like it. That's why it's the fastest growing sport in the world. There's no question in whatever we play them in, in any sport, there's competition to be the best. So there's no question we feel (the pressure) very strongly."

Playing its in-state rival aside, MSU needs a victory against Ole Miss from a logistics standpoint to bolster its NCAA tournament resume. As of Monday, the Bulldogs sat at No. 41 in the NCAA's NET rankings, while the Rebels came in at No. 93. In his latest update, ESPN college basketball expert Joe Lunardi had MSU among the first four out of the NCAA tournament picture, so every win matters down the stretch.

Public enemy number one for MSU will be reigning first team All-SEC selection Breein Tyree. Tyree, a 6-foot-2 guard, is third in the Southeastern Conference with his 19 points per game average. He's a 42-percent shooter from the field and makes 37 percent of his shots from beyond the arc. In two matchups against MSU a season ago, Tyree scored 19 and 25 points, respectively.

"He's a terrific player," Howland said. "He's shooting a very high percentage from three and he scores at all levels. He's a very difficult matchup. He has a chance to be an NBA player, no doubt, I really like his game."

Offensively, MSU is preparing for the Rebels to bring pressure throughout the night.

"They're very good at running the 1-3-1 trap," Howland said. "They're also playing a little more 2-3 zone as of late as a primary defense without playing the 1-3-1 first. They're really pressuring the ball and they're playing really hard. That's the main thing."

In the 2018-2019 season, MSU and Ole Miss split the season series, with each time winning on the road.

In the final three minutes against Vanderbilt Saturday, MSU starting center Abdul Ado suffered a shoulder injury and did not return to the contest. In his postgame press conference, Howland said he believed the injury wasn't serious, but that Ado would be sore for a day or two.

Asked for an update Monday, Howland said the team will "see how he feels" leading up to the matchup with the Rebels.

Having started all 23 games for the Bulldogs this season, Ado is averaging 5.6 points and 6.8 rebounds per game while shooting 56 percent from the floor.

Five of MSU's final eight regular season games are away from the friendly confines of Humphrey Coliseum. The Bulldogs are just 2-4 in road games this year (2-2 in neutral site matchups) compared to 11-2 in Starkville. Nevertheless, Howland has no plans to change his team's approach to preparing for road matchups, citing two of his team's four away matchups have come on the final possession of the game.

"We've been on the road, and we've been right there," Howland said. "We've had a couple heartbreakers. You just have to out-tough the opponent on the road."