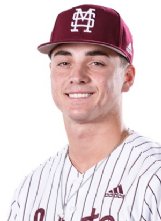 STARKVILLE -- Of all the unknowns on the 2020 Mississippi State baseball roster, the most belong to second-year head coach Chris Lemonis' pitching staff.

Replacing ace Ethan Small -- a first round pick of the Milwaukee Brewers in June's MLB First Year Player Draft -- No. 3 starter Peyton Plumlee and bullpen regulars in Colby White, Jared Leibelt and Cole Gordon, Lemonis, pitching coach Scott Foxhall and the rest of the MSU staff will be tasked with a major rebuild on the mound.

And while there will be plenty of new faces taking the bump at Dudy Noble Field this season, the Bulldogs do boast one of the top arms in the Southeastern Conference in reigning National Freshman of the Year J.T. Ginn.

Ginn -- who turned down first round money from the Los Angeles Dodgers out of high school -- finished his inaugural season in Starkville 8-4 with a 3.13 ERA while fanning 105 batters in 86 1/3 innings pitched -- a total that was limited due to lingering shoulder soreness that surfaced April seventh against Tennessee.

A right hander with more velocity than Small, the Brandon native will slide into the vacated Friday starter role, beginning with the season opener against Wright State.

"We all know J.T.," Lemonis said in January. "We feel like we can go Friday night with anyone in the country with J.T."

Behind Ginn, the MSU starting rotation is unknown. To begin the season, redshirt freshman Christian MacLeod will take on the Saturday role against Wright State, while sophomore Eric Cerantola will be the Sunday guy.

MacLeod -- who missed all of last season with an undisclosed illness -- is a big body at 6-foot-4 and 227 pounds. Using a three-pitch mix of fastball, curveball and changeup that MSU pitching coach Scott Foxhall categorized as the best of anybody on the roster, he offers the lone left-handed look in MSU's present rotation.

As for Cerantola, he comes off a freshman campaign in which he struggled to find the strike zone as a midweek arm despite finishing 3-0 on the year. Having spent the summer with the Canadian National Team and the Amsterdam Mohawks of the Perfect Game Collegiate Baseball League over the summer, he'll be leaned on as a power right-arm that has topped as high as 98 miles per hour on the radar gun this preseason.

"I anticipate Eric to be a more mature pitcher this year," Foxhall told The Dispatch in January. "He has been markedly more consistent in his bullpens than he was at the end of last year so I think that he'll take that in between the white lines and he'll give us a good four or five innings as a starter once the season goes."

Starters aside, the Bulldogs' bullpen is even more unproven.

With the departures of White, Leibelt, Gordon and others, seniors Riley Self and Spencer price are the lone experienced arms returning to the unit.

Self showed flashes as a junior but finished with a 4.91 ERA in just 25 2/3 innings pitched. Price has been similarly inconsistent after he notched 14 saves as a sophomore but made just 12 appearances last year after he missed the entire 2018 season due to injury.

"I'd love to be able to get those guys back in the mix and have their experience and maturity with everything," Lemonis said in January. "Spencer had an okay fall and Riley didn't pitch this fall, so us seeing them this spring will be a big piece. Riley was my guy in the middle of the inning outside of Jared Liebelt. I felt like the toughness factor with Riley being able to go out there and get us outs was huge for us, (and) Spencer getting back the mix, finding his confidence, and being able to find that slider."

Other names to monitor in the MSU bullpen include graduate transfers David Dunlavey (Furman) and Carlisle Koestler (Southeastern Louisiana) and freshmen Landon Sims and Will Bednar.

Dunlavey and Koestler both have past starting experience at their previous stops and could factor in as midweek starters or a potential No. 3 should Cerantola struggle, while Sims and Bednar are hard-throwing freshman with high-upside.

"We bounced around all year and had a lot of success," Lemonis said of how he'll utilize arms in midweek games. "We were really good at coming back from 4-0 or 7-0 last year early in the game, which was a credit to our offense. I'm more concerned about building that bullpen right now. Our bullpen was the reason we were very successful last year."