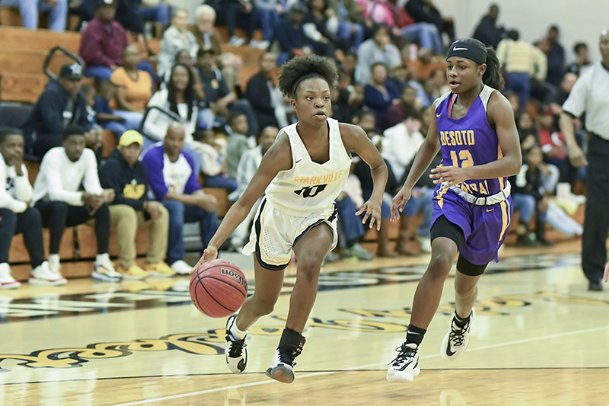 Starkvilleâs Tydaija Spencer drives past a defender early in the third quarter against DeSoto Central on Monday in Starkville. Photo by: Austin Frayser/Special to The Dispatch

STARKVILLE -- Starkville High School junior Amaya Ford can score with the best of them.

A career-high 46 points against South Panola on Jan. 17 is just one example of what Yellow Jackets coach Kristie Williams can get from her star, who Williams has previously called one of the best juniors in Mississippi.

But on Monday, when Starkville opened up Class 6A tournament play at home against DeSoto Central, Ford showed off another dimension to her game when her team needed it most.

After scoring 17 straight points for Starkville to bridge the first and second quarters, Ford recognized that DeSoto Central was closing the gap a bit. A lead as big as 17 points was down to nine.

So she drove down the middle of the paint, turned to her right and dished the ball to Ladasha Clark, open on the wing. Clark's 3-pointer went down, and the Jackets' lead was back to double digits.

In the third quarter, shortly after DeSoto Central had whittled the Starkville lead down to six points, Ford pulled off a repeat. She drove the ball toward the basket, then dumped it off expertly in the post to Jakailyn Brown, who made a nice spin move and finished the layup.

While Ford led the Jackets with 25 points Monday, the two passes highlighted the breadth of her game. The junior's performance helped Starkville (15-11) take down DeSoto Central 67-53 on Monday, and the Jackets will meet Hernando on the road Friday.

Sukkima Suell contributed 11 points, all in the second half, and Jada Odneal had 10. Early in the first quarter, Odneal put back a Suell miss and pushed Starkville's lead to 6-0, then stole the ball and scored again for a quick 8-0 advantage.

"It feels really good, especially in the playoffs, to come out like that," Odneal said.

DeSoto Central scored first basket of the game shortly after Odneal's outburst, but Ford followed with 17 consecutive points for the Yellow Jackets -- 11 of which came before the Jaguars scored another point.

"The rhythm of the game found her," Williams said of Ford. "She was able to get to the rim, a lot of times untouched, and why fix what's not broken? We just kept letting her get into the lane as often as she could because it was working for us, and it was good to see that she was able to get there and maximize the opportunities."

But the Jaguars climbed back into it, cutting the lead to nine points on a 3-pointer that banked home off the glass. After Ford responded by finding Clark outside -- even if it meant snapping her own streak -- DeSoto Central worked to trim the Starkville advantage to 30-23 at the half.

A jumper from the Jags' Janiya Jones in the third quarter got the lead down to just six, but it was as close as DeSoto Central got: Starkville was ready to slam the door.

Suell handed out an assist for a nifty score, Brown converted an old-fashioned three-point play when she fought through contact to putback a rare Ford miss, and Ford repaid the favor by finding Brown for a 3.

Then Clark hit a free throw, Suell converted an and-one, and Ford split a pair at the line. Just like that, a 35-29 game was 48-29, and DeSoto Central never threatened again.

"We found out that our post game was where it needs to be, and they can't guard us there," Suell said. "We've gotta work."

Ford scored just six points in the second half while post players Suell and Brown combined for 20. Neither of the two scored at all in the first half, and all nine of Brown's points came in the third quarter.

"They started locking down on (Ford), and the post stepped up," Suell said.

Starkville handled business in the fourth quarter to post a 14-point win and earn a second-round date at 6 p.m. Friday at Hernando. The Tigers (25-4) are a fearsome opponent, but the Jackets are ready.