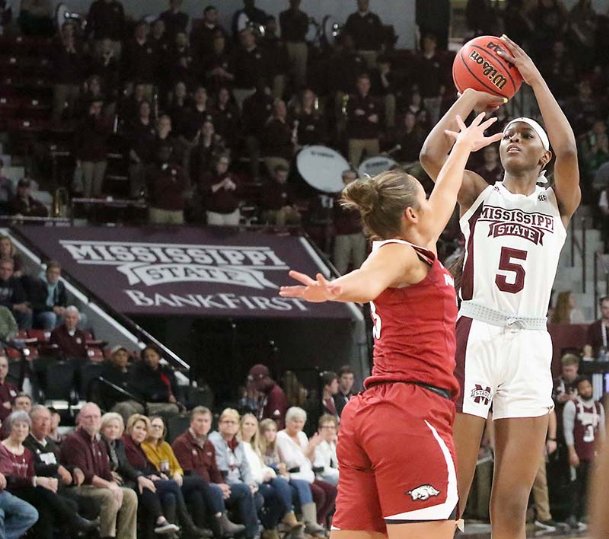 Now sitting at 24-5 and having locked up the No. 2 spot in the final Southeastern Conference standings, Mississippi State's success has been predicated on the major minutes baby Bulldogs Rickea Jackson, Aliyah Matharu, JaMya Mingo-Young and Jayla Hemingway have afforded Schaefer over the 29-game schedule.

And though MSU has found success in its freshman class, there's more be to had -- or in Schaefers word's, a consistency that needs to be found.

For each major moment Schaefer's freshmen have provided, it's been backed up by a seeming step back or disappearance in the ensuing game.

Take Mingo-Young's 14-point outing against No. 1 South Carolina for example. Lined up against likely first team All-SEC selection Tyasha Harris, the Bogolusa, Louisiana native held her own on both ends of the floor -- finishing 6-of-10 from the floor with three rebounds and two steals.

Despite the impressive showing, Mingo-Young has scored more than four points in a game just once in the five weeks since the Bulldogs visited Columbia.

Most recently, it's Matharu who will look to avoid the usual freshman tendency to fall back to earth after her 18 points helped MSU lock up the No. 2 seed in next week's SEC Tournament with a win over Arkansas Thursday in Starkville.

"It seems like every one of those freshman comes off a great game they cant stack them -- which is typical of a freshman," Schaefer said in reference to Matharu, Mingo-Young and Hemingway. "And so my focal point with Aliyah today is going to be 'humble and hungry and make sure you can get through the door with your head because if you can't there'll be somebody that can shrink it for you real quick whether it's Sunday afternoon (against Ole Miss) or a couple of coaches the next couple days.'"

Rickea on the mend

Speaking of freshmen, it appears as though Rickea Jackson may not be 100 percent when MSU heads to Oxford Sunday for its regular season finale against Ole Miss.

Battling a case of strep throat throughout the week, Schaefer said he didn't think Jackson would play Thursday against the Razorbacks. She would. In a limited 17 minutes of action, Jackson scored seven points on 3-of-8 shooting, though her energy visibly wasn't there due to sickness.

Schaefer said Friday that she'll continue to be monitored throughout the weekend.

A candidate for both SEC and National Freshman of the Year, Jackson has been wholly impressive in her inaugural season in Starkville as she currently averaging 14.7 points, 4.8 rebounds and 1.2 assists per game. Speaking with the media Friday, Schaefer stressed how truly special her freshman season has been.

"I think that's what impresses me about Rickea -- she's doing it on a young team and she's the focal point" he said. "And she can do it in so many different ways. She finishes at all three levels -- at the rim, mid-range, can stretch you to the 3-point line. She's just a multidimensional kid. That kid is going to be one of the premier players in women's college basketball in years to come."

While Jackson and her fellow freshman have shown a propensity to fill up the scorer's sheet, sophomore guard Myah Taylor has done so in a less offensive way.

A floor general by nature, Taylor thrives off setting her teammates up -- though she can finagle her minute 5-foot-7-inch frame through traffic and to the rim at times.

Thursday, she offered a glimpse at that ability, finishing with a final statline of three points, three rebounds and seven assists in a game the Bulldogs went over 90 points for the seventh time this season.

"I just (have to) contribute the way I can -- playing defense, assisting the ball, scoring on a need-be basis," Taylor said. "But last night we had players that were hot and scoring the ball really well so I just did my role to get the win.""

Having played just 11.2 minutes per game a season ago, Taylor has watched her playing time skyrocket to over 25 minutes per contest this year. As such, she's taken a more vocal leadership role on and off the court as the latest in a long line of Schaefer-developed point guards.

"I've definitely seen her take a lot of accountability for this team," senior guard Jordan Danberry said of Taylor. "She's just grown as a leader, as a person and as a player."

Schaefer on the one-time transfer

With the NCAA beginning preliminary discussions toward a one-time transfer in which athletes could switch schools without having to sit out of competition for a year, Schaefer was asked about his thoughts on the potential change Friday.

He responded with the following:

"I can probably take both sides. It's concerning in some ways and in some ways certainly I think if kids are in the wrong situation they need to be allowed to have the opportunity. I also think we're in this world of instant gratification and all of a sudden you have a bad day or a bad week and all of a sudden it's 'Let me try something else,' instead of learning to deal with adversity and that's how you grow. That's how your character is developed. So I think there's both sides of it and certainly if someone is in a bad situation and not in a good place then certainly I think it's beneficial for everyone involved and I'm certainly for it in those regards."