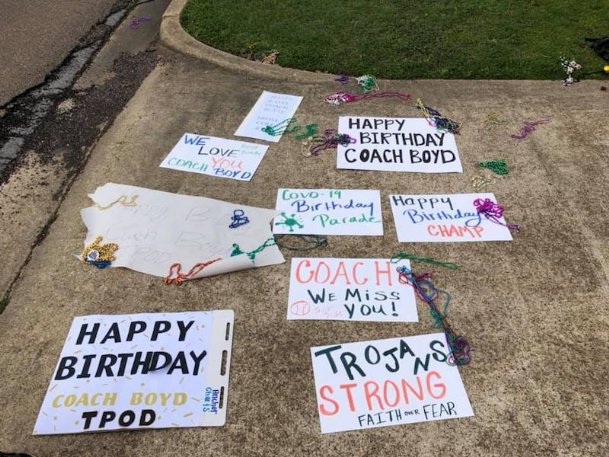 New Hope baseball players and their families waved these signs outside the house of head coach Lee Boyd on Sunday, forming a surprise parade in honor of Boyd's 37th birthday. With the spring season suspended due to the coronavirus, Boyd hadn't seen his players since their game March 11 in Biloxi. Photo by: Allison Power Boyd/Facebook

Boyd's team had just played three games in three days at the Battle of the Beach tournament in Biloxi over spring break, so when a Trojans assistant warned him on the bus ride home that the high school baseball season could be in jeopardy due to the COVID-19 coronavirus, Boyd found the news hard to believe.

But by the time the team got back at 11:30 p.m. that day -- Wednesday, March 11 -- the NBA had suspended play, and new cancellations across sports happened at lightning speed. On Thursday, college basketball conferences across the country shut down their league tournament, the NCAA canceled its winter and spring championships, and the NHL and MLB suspended operations.

By Friday morning, the Lowndes County School District closed for the following week and suspended all athletics. With public schools across the state now closed through April 17, the Trojans haven't seen the field since their trip to the coast.

"We left Wednesday night having no idea that we were not gonna get the chance to see each other again," Boyd said.

Or so he thought.

Boyd's 37th birthday was Saturday, and his players -- with the help of his wife, Allison -- orchestrated a surprise as best they could for their coach amid the outbreak.

As it was billed on Allison's Facebook page, the COVID-19 Trojan Baseball Birthday Parade gallivanted past the Boyd house on Sunday as Boyd played catch in the front yard with his 9-year-old daughter Audrey and his 6-year-old son Brady.

"I really didn't expect it," Boyd said. "They planned it pretty well."

Brady, who is almost always in full baseball regalia, approached his dad about playing catch outside as they usually did. Boyd still isn't sure if his wife, who filmed the surprise from the front porch, intervened to make the timing even better.

Brady, who was born a week before Boyd's first state championship with the Trojans, has felt like the team his whole life, even riding the bus with the Trojans. Players and family members waved to him as well as his father; Brady ever jogged toward a white SUV as it drove by to say hi.

Boyd, who raised both hands in disbelief and happiness as the first vehicle rounded the corner and neared his house, said the event was "really special."

"I've been here a long time now," said Boyd, who is in his 11th year coaching the Trojans. "God has been good to us; we've won a bunch of baseball games. Nothing surpasses that: Kids caring about you, just wanting to see you. That meant the world to me. That those guys were thinking about me outside of baseball was pretty neat."

And while he's still getting used to the "really pretty weird" feeling of an off weekend in March with the baseball season still on hold, Boyd can remember the moment his players brought to him.

"I have a lot of memories with baseball and the guys that I've coached over the years, but that'll be definitely something I'll never forget," he said. "Something special."