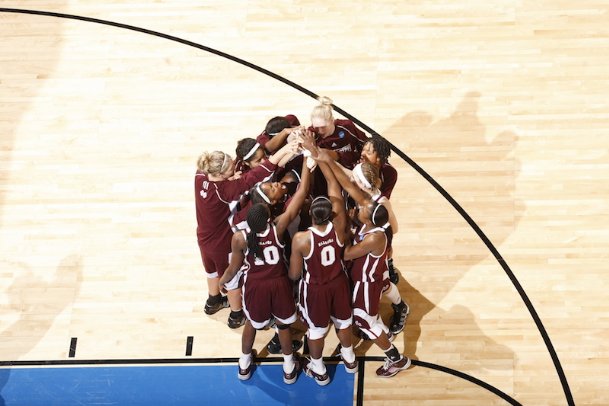 By beating the Buckeyes, the Bulldogs reached the Sweet 16 for the first time in program history. Photo by: MSU Athletics

STARKVILLE -- Seated in the underbelly of the Peterson Events Center in Pittsburgh, Pennsylvania, Alexis Rack changed her music.

Normally one for upbeat, hype tunes ahead of a game, the former Mississippi State guard could feel the tension in her body. She opted for something slower, something chiller, something to calm the nerves.

"I remember that vividly," said Rack, now the head boys basketball coach at Franklin Senior High School in Louisiana. "I was excited. I don't remember what slow songs I was listening to, but I know they were all slow."

Wandering out onto the court for warmups, Rack and the 2010 MSU women's basketball squad were in a true neutral setting for their second-round NCAA tournament game against No. 3 seed Ohio State. A year after falling to the Buckeyes in the second round in Columbus, Ohio, the Bulldogs wouldn't be denied a trip to their first Sweet 16 in program history.

Downing Ohio State 87-67, coach Sharon Fanning-Otis helped MSU to the only Sweet 16 appearance of her career in a game that occurred 10 years ago to the week and still conjures up emotions of devotion and revenge.

"Bottom line is that it was one of our finest hour type things," Fanning-Otis told The Dispatch. "It was a team that was very, very focused and just one of the sweetest wins. It was one of those payback games. It was a very, very special win for the program."

Instead of the large-scale watch parties fans have grown accustomed to in recent years, the 2010 team awaited their postseason fate in a large room at the Templeton Athletic Academic Center.

MSU was given a No. 7 seed and a meeting with Middle Tennessee State in the first round. Celebrations were subdued but excited. Then their potential second-round matchup was announced.

"Our claps were bigger once we saw we were in Ohio State's region than when we saw our name pop up on the board," then-sophomore guard Diamber Johnson quipped.

One year removed from losing a tightly contested second-round game to the Buckeyes in Columbus, the Bulldogs remained sour. Looking back with a decade of perspective players and coaches alike still question a handful of foul calls down the stretch of that game. No matter. MSU got its chance at revenge.

With Ohio State in the back of its mind, MSU was sluggish in its opening-round win over Middle Tennessee. Trailing by two at halftime, guard Tysheka Grimes -- one of eight seniors on the MSU roster -- carried the Bulldogs with eight points in the opening 20 minutes of competition. Defensively, MSU struggled to guard the 3-point arc, as MTSU poured in five of its 12 3-pointers in the first half.

Finding their footing in the later stages, Rack and Chanel Mokango combined for 34 points on 13-of-19 shooting -- including 6-of-8 makes coming from 3-point range -- as the Bulldogs stormed back for a 68-64 win and a rematch with Ohio State -- who had downed St. Francis (Pennsylvania) 93-59 that same day.

"I don't know if we were really overlooking them or if we were just like, okay, we really want to get there to play Ohio State, we want to get that game and want to prove to them that, hey, we're here, and we're ready for you," then-senior forward/center Channa Campbell said.

"In that game, we felt like we were the better team, and we left with a bad taste in our mouth," then-junior guard Mary Kathryn-Govero added of the 2009 loss. "So it fueled us to know that we were a good team returning that year, and once you make the NCAA tournament you only want to do it again and again to go further and further."

While Rack remained anxious as her music ran through her ears at the Peterson Events Center, there would be little anxiety in her play that day.

A first-team all-SEC honoree, Rack flashed the elite talent that got her picked in the third round of the 2010 WNBA draft as she torched the Ohio State defense for 18 points in the first half.

Mokango -- one of three Congo-born players on the 2010 squad -- aided the opening effort with 11 of her 19 points in the first half as MSU leapt out to a 12-point lead at the break.

Coming out of halftime, the Bulldogs buried the Buckeyes under a barrage of efficiency from the floor. MSU combined to shoot 59.3 percent in the second half -- including a 50-percent mark from 3-point range.

Senior guard Armelie Lumanu -- the 2010 SEC defensive player of the year -- led all MSU scorers over the final 20 minutes as she notched 13 points in the frame. Rack continued her hot-shooting ways en route to her fourth 30-point game of the year. The route was on.

"Mississippi State-Ohio State the year before they beat us, Ohio State was talking trash," Lumanu told The Dispatch. "They were talking like they'd beat us, we're not going to beat them. When we got that rematch, it's like we shut them up. They couldn't talk anymore."

As the final buzzer sounded, hugs ensued. Tears streamed from the Bulldogs' eyes. History had been made.

Back in the locker room, pandemonium ensued.

Grimes led the dance circle. She'd earned the role grooving to fellow Baton Rouge native Lil' Boosie's "The Zoom" following an upset of Florida State her freshman year. A torn plantar fascia had left her unable to play against the Buckeyes, but Grimes wouldn't miss the chance to celebrate.

Fanning-Otis, too, joined in on the festivities.

For the 36-year head coach, there was a euphoria in the moment. After starting her career as a graduate assistant for famed Tennessee coach Pat Summitt in 1975, Fanning-Otis had reached the Sweet 16 for the first time in her career of over three decades.

As pressing was the connection between her and the senior class. Beyond their on-court relationships, the team had given their coach away at her wedding to former Tupelo mayor Larry Otis the year before. It was a bond that ran deeper than basketball.

"They were just a really, really good group of girls that were hardworking and had that team concept first and foremost, and they were winners," Fanning-Otis said.

Following a plane ride that was rather subdued after the team had exhausted its energy in postgame celebrations, the Bulldogs were greeted by the clanging of cowbells and the cheers of fellow students and alumni as their team bus pulled into a spot near Ruby Hall. For seemingly the first time in its history, not only was MSU heading to the Sweet 16, but a once-apathetic fanbase had a team to embrace.

"To see the fan support, just walking around campus and people saying, 'Good game,' this and that, it was like it was more like, 'OK, you know, we're here representing this school," Johnson said. "They were appreciating what we were doing. I think that's probably one of the best experiences of all was finally being welcomed by the fans and students."

Standing at center court at Humphrey Coliseum, flanked by members of the 2010 team, Fanning-Otis looked into the crowd with a wry smile.

She was being honored at halftime of MSU's Feb. 23 game against Alabama, 10 years since her squad made the program's inaugural run to the Sweet 16.

A two-point loss to Florida State in its third game of the 2010 NCAA tournament left some on the team wondering what could have been, sure. But as the rafters at The Hump have been filled with memories of Final Fours, Elite Eights, and four subsequent Sweet 16 runs over the past decade, Fanning-Otis still boasts fond memories of the program's initial brush with national success -- a moment that began in 2009 with heartbreak and ended with sweet revenge.

"Every time you had the team meals with them at the house it's fun and the recruiting and everything, just every piece of it," Fanning-Otis said of what she remembered most about the 2010 team. "It was a fun group, a memorable year and, of course, a special victory to get into the Sweet 16."